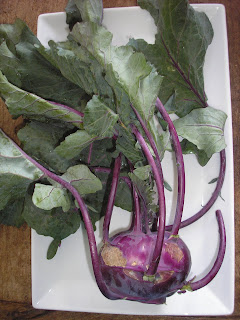 My first exposure to kohlrabi was as a novelty vegetable grown by my father for the sheer joy of seeing something new emerge from his constantly expanding garden. Somehow it failed to “stick” in my mother’s kitchen, though it is hard to imagine a green leaf or anything remotely resembling a turnip that that wonderful Southern cook wouldn’t pair with some form of pork fat. But because a local organic farm here in San Miguel de Allende, Mexico, grows and sells it, I decided to rekindle my acquaintance with the versatile vegetable. Originally, I had planned on steaming it with some celery root, carrots, and turnips for my vegetarian husband, but I ate so much of it raw during the chopping process, that I barely had any left to cook. Hence, remembering from Paris days my love of celeriac remoulade, the following recipe was born as a way to try my next kohlrabi purchase raw:

Combine the mayonnaise, mustard, lemon juice and parsley in a bowl. Add the kohlrabi and apple, season with salt and pepper. Mix gently, cover, and chill until ready to serve. Just before serving, sprinkle with a bit more chopped parsley.

Although this is really just my standby recipe for celeriac remoulade using kohlrabi instead of celery root, here are some additions I am tempted to add: green onion, celery, capers, horseradish, cayenne, a different herb (basil,dill,or mint), chipotle chile in adobo sauce, or a drop of honey.

Scroll down for information about the vegetable itself, some culinary uses, history, and h 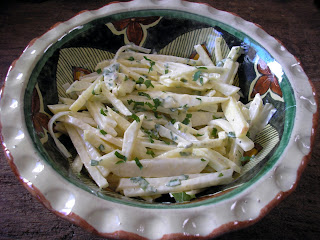 The bulb, which grows above the ground, looks rather like a vegetable sputnik, something from another planet. Two varieties, white (actually a pale green) and purple, are quite common, with the purple variety being slightly spicier. Both the bulb and leaves can be eaten raw or cooked. The flavor, somewhat like a mild turnip tinged with cabbage overtones, reflects its name in German: kolh is cabbage, rabi is turnip or radish. The leaves, which taste like a combination of its cousins kale, cabbage, or collards, can be cooked and young ones can be eaten raw. The bulbs are best when about the size of an average tangerine.

How to Use Kohlrabi Raw:
In salads
On a cheese board or relish tray

Boiled, Steamed, or Sautéed:
In a cheese sauce
Sautéed with onion, garlic, and/or red bell pepper, and finished off with a squeeze of lemon and a sprinkling of fresh parsley, basil, or dill
Tossed with sour cream or yogurt, dill, and either raw or cooked garlic
Added to a soup, stew, or casserole
Puréed like mashed potatoes
In a vegetable gratin
Stir-fried
In fritters
Hollowed out and stuffed
Served with toasted garlic breadcrumbs or horseradish breadcrumbs
Served with any herb pesto
Sprinkled with toasted nuts or seeds

Kohlrabi, a member of the cabbage family (Brassicaceae, or Cruciferae), which has been cultivated for thousands of years, is a relative newcomer in the culinary world. While its exact beginnings are somewhat sketchy, we do know that Pliny the Elder mentions a “Corinthian turnip” whose growing habits are suspiciously similar to kohlrabi; that some scholars suggest that Apicius, author of what is generally considered the oldest cookbook in the Western world, discusses its preparation; that the Chinese have pickled kohlrabi for centuries; that Charlemagne ordered it to be planted in the lands under his control; that it made its way in the 1600s into India, where it remains very popular today; and that it was first recorded in America in 1806. So why is it considered a newcomer?

Although cabbages have been around in both cultivated and wild forms for at least 3000 years, a gradual process of natural selection exists whereby humans favor certain qualities and characteristics in their foodstuff, and thus choose seeds, plants, and forms that support these preferences. Over a long period of time and successive generations of cultivation, certain plant characteristics develop. So from the original wild cabbage, we eventually get such vegetables in the same botanical family as kale, collard greens, turnips, radishes, rutabaga, mustard, horseradish, arugula, some cresses, various Chinese greens, broccoli, cauliflower, brussels sprouts, and kohlrabi, to name but a few.

That the members of the Cruciferae family are considered cancer-fighting super vegetables is probably well known. The reasons why may not be. High in vitamin C, potassium, soluble fiber, folate, carotenoids, these non-starchy vegetables are often touted as healthy and are praised for being low in calories (about 19 calories per 1/2 cup raw) and high in dietary fiber (2.5g per 1/2 cup). But it is the nutrients with potent anti-cancer properties such as diindolylmethane, sulforaphane, selenium, and other sulfur-containing compounds known as glucosinolates that seem to account for their status as “super foods.” For more technical and scientific information, just Google The American Institute for Cancer Research for a listing of various clinical studies and detailed phytochemical data.

And in the meantime, look for new ways to introduce this versatile vegetable into your regular diet.

Posted by Victoria Challancin at 12:40 PM