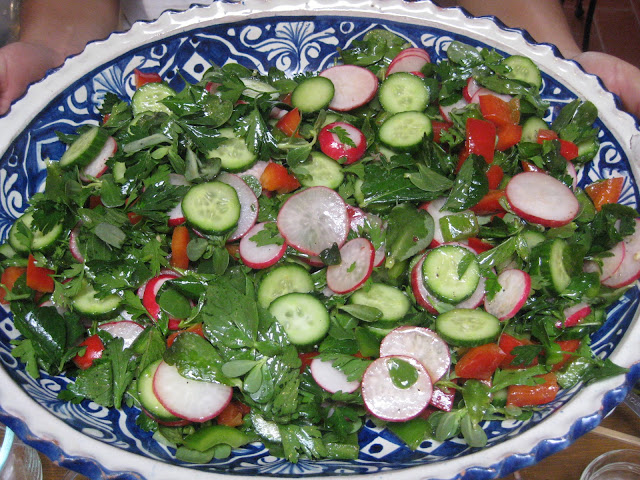 As a part of a class featuring mainly Middle Eastern flavors that I taught last week, I wanted to include a healthy, hearty, hardy salad with bright flavors.  What better than fattoush, that lovely Arab-style salad featuring fried or bake pieces of pita bread mixed with an assortment of fresh salad ingredients?  The only problem is that I didn't want to use the pita as I featured it in another recipe with hummus.

Fattoush without the bread?  Well, let's just call it something else.  But truly, if you added the fried or baked pita pieces and sprinkled the whole thing with a bit of sumac, ( which I wrote about here) you would have a perfect fattoush! [Sometimes I think my blog should have been called A Rose by Any Other Name...]

Fattoush is one of those practical marvels of ingenious cooks.  In the same way that Mexicans use stale tortillas to make chilaaquiles and the Italians feature oil- and vinegar-soaked (dare I say "stale"?) bread in their panzanella salads, Middle Eastern cooks, particularly in the Levant, use up their leftover flatbreads in a mixed salad called fattoush.  Though I can hardly call the salad I am showing you today  fattoush, as it contains no bread, I will tell you it is a delightful way to bring some bright, healthy goodness to the table.

This salad includes purslane (read my post on purslane here), which is an amazing ingredient.  Healthy, extremely hardy (great for hot climates), with a tangy, lemony flavor, purslane is a perfect salad ingredient.  The Mexican cooks that I teach almost never know it as a salad ingredient however, and they often giggle over my inclusion of purslane in my salads as they only know it as verdolaga(s), which they cook with pork in a green sauce with tomatillos.

I also chose to pair this salad with some Middle Eastern-style yogurt marinated chicken with spices which include cumin, coriander seeds, paprika, allspice, turmeric, and black pepper.  While this chicken is much better grilled over charcoal, the pan-sautéed version is still exciting to the mouth--tangy, sharp, vaguely spicy, yet delicate. 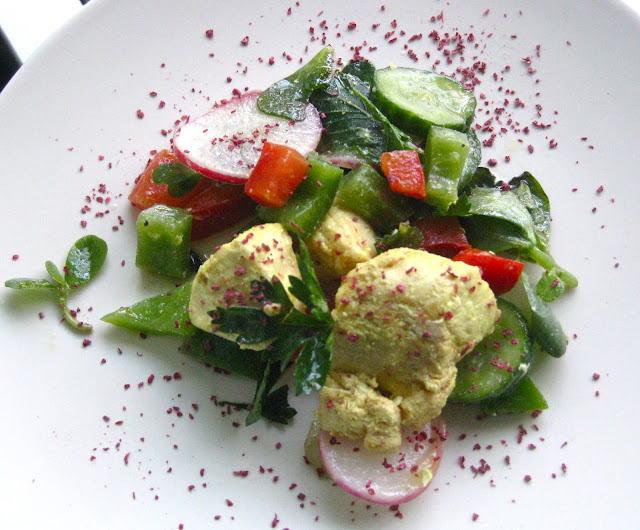 A small serving of leftovers


Below is the final salad which we topped with yogurt- and spice-marinated chicken.  I forgot to take a photo after it was plated individually and dusted with a bit of sumac. 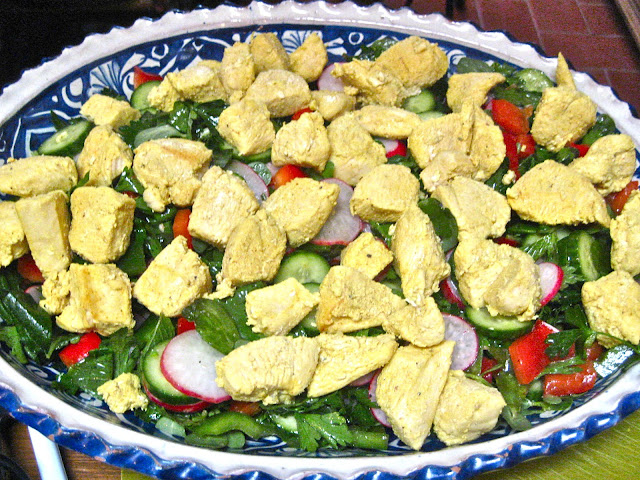 With the addition of yogurt-marinated spiced chicken


Cook's Note:  Allspice is a common ingredient in Middle Eastern cooking.  I love it with sautéed tomatoes and onions which are used as a filling for omelettes or with scrambled eggs.  Here, I add it to a lemon juice and olive oil vinaigrette, which is another common combination.  You can also deflame your onions with vinegar or lemon juice and water--and, yes, sumac.

Place all the ingredients for the salad in a large bowl and toss gently.

In a small bowl, whisk the ingredients for the dressing.  Check and adjust seasoning.  Pour over the vegetables and mix well. 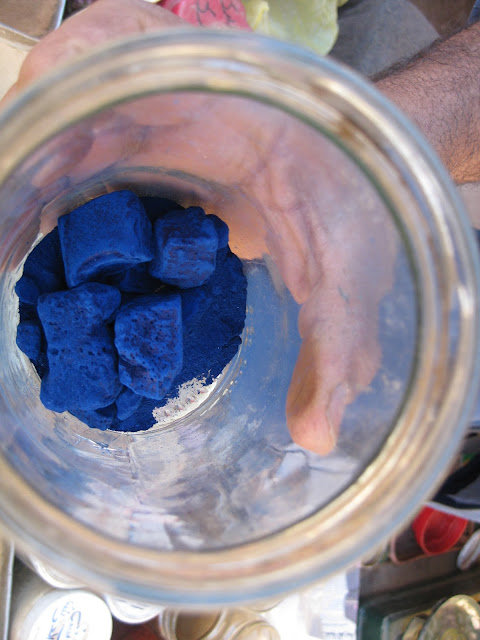 Moroccan colors
Posted by Victoria Challancin at 7:37 AM

That looks delicious...and so colourful!

We have the same taste in salads...

The loveliest looking 'fattoush' I have ever seen! I make 'variations on the theme' very often: now I'll try radishes too :) ! What a wonderful salad for which the refrigerator/gardenbed always seems to provide the ingredients!

I love the idea of this allspice vinaigrette! In fact I was just looking at my bottle of allspice thinking that I don't use it enough! :)

This salad will be on my dinner table this evening.
What is the cobalt blue item in the glass bowl in the last image? stunning colour.
Helen

Delicious! Can't wait to try it for myself. Yum.

I love fattoush, it is one of my favorite salads. I loved the idea of topping it with chicken to make a meal of the salad

This recipes comes at the perfect time! I'm incorporating GREENS with every meal and really love the sound of the healthy and simple Allspice Vinaigrette. YUM! So fresh, so easy! Mmmm!

That is a delicious looking salad and I love the yoghurt coated chicken. The flavours in this salad must be amazing. And I love allspice! xx

Susan, the blue stuff in the photo you asked about is a type of dye that is also used to mix with paint. The entire small city of Chefchaouen in northern Morocco is painted some shade of this color. I must have 50 photos of it in one form or another just because it makes me happy.

Victoria, this looks delightful. I did a class last week inspired by you and your Chimichurri sauce..... thanks for you lovely ideas

That's so nice to hear. I love it how we all inspire each other. Thanks.

It looks amazing ,, One of my fav salads :) :) Thanks for sharing the Recipes

This salad is looking delicious . . .