Za'atar: A Taste of the Middle East 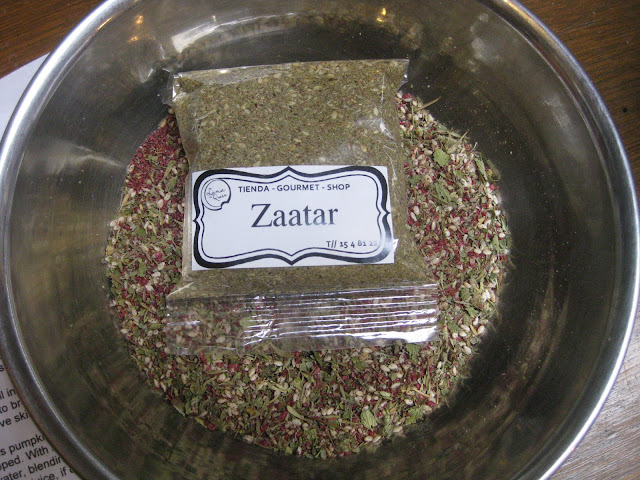 Commercially prepared Za'atar atop a homemade blend (recipe below)


Za'atar:  A Taste of the Middle East
by Victoria Challancin

What is za'atar, you ask?  Simply put, za'atar is two things:  1) the Arabic word for thyme and 2) an herb and splice blend that contains thyme.  Of course, this simply translates as confusion to the cook who sees the word za'atar in a list of recipe ingredients, and wonders which form is being referenced!

I first learned to appreciate za'atar in the mid-70s when I moved to Abu Dhabi straight out of grad school.  Immediately upon exposure to the new and  exotic flavors of the Gulf, enriched with Indian influences, grounded by traditional Levantine cooking, and further expanded by its own regional food traditions, I learned to love and embrace the food with all of its simplicity, with all of its complexity.  And nowhere was the diversity more on display than in that glorious selection of Middle Eastern appetizers, many of which hail from Lebanon, mezze.

A typical mezze, a selection of Middle Eastern appetizers, always includes several dips such as hummus and baba ganoush, and comes with soft, hot, fresh pita bread to accompany them.  Sometimes that bread is smothered in a paste made from za'atar and olive oil.  Or occasionally, older bread is used in the form of toasted pita chips--and these chips are customarily painted with that same herby spice blend mixed with olive oil, called za'atar.  Of course I had to investigate.

Za'atar:  A Bit of History
When an ingredient is used over a large expanse of territory where the language varies regionally, there is bound to be some confusion and contradictory information surrounding it.  Za'atar is no exception.  First of all the spelling of the word causes problems in English as it is a transliteration of the Arabic word which contains one phoneme that doesn't even exist in English, hence the wildly differing spellings: zaatar, zahatar, satar, zahtar, zatar, za'atar (the closest to the Arabic, in my opinion), and probably more.

I have seen claims that za'atar is a type of wild thyme, or a type of savory, or a type of hyssop, or even a type of oregano.  But a generalization of this would be to say that za'atar refers to similarly-flavored members of the herb genus Lamiaceae, which includes all of these.  Logically, the chemotypes of these herbs are somewhat similar.  Because these herbs grow in the same habitat and are physically similar, perhaps that is why they are all referred to as za'atar.  For this reason, it is often said that za'atar  is both a family of herbs and an actual herb itself (probably Thymbra spicata).

Many of the purchased blends of za'atar found in countries outside of the Middle East just include thyme, which, while it is good, somehow lacks a certain authenticity or fullness of flavor as compared to the blends found in the Arab world.  The mixture I use in the following recipe includes a blend of Lamiaceae herbs that round out the flavor and give it a fuller flavor more reminiscent of what you would find in the Middle East.

The actual za'atar herb/spice blend includes thyme, sesame seeds, sumac (for more information, read my post on sumac here), and salt.  Basically, that is it.  I have seen versions that include cumin, paprika (when sumac wasn't available), and even cinnamon.  Sometimes a bit of lemon zest is included, again, probably when the lemony-flavored sumac isn't available.  Basil makes an appearance occasionally as well as savory, hyssop, marjoram, and oregano.

One interesting bit of culinary lore surrounding the use of za'atar is that in the Middle East students often load up on za'atar by eating it mixed with olive oil and slathered onto warm pita bread before exams, believing that it sharpens the mind.  And why not?  It probably does.

While the pre-blended za'atar mix is readily available in Middle Eastern markets all over the world, you can also make one with a few simple ingredients right in your own kitchen.  Scroll down for ways to use it.

Recipe:  Za'atar
(Recipe by Victoria Challancin)
Cook's Notes:  I usually lightly toast the sesame seeds in a dry skillet for about 45 seconds to bring out the flavor.  Use Greek oregano if you have it, for a more authentic taste.  Add 1 teaspoon toasted and ground cumin seeds for a nice variation.

To make za'atar paste:  Mix equal parts of the za'atar mix and extra-virgin olive oil in a bowl.  If using as a dipping sauce for bread, add more olive oil.

To make manoush (pita bread slathered with za'atar blend):  Now that Sawsan of the delightful and inspiring Chef in Disguise blog reminded me via her comment, I do remember that pita with za'atar is called manoush (spellings vary).  To make it, simply spread the za'atar paste on the unbaked pita bread just before you put it in the oven to bake.  I used a recipe I had in my files for the pita itself, using half whole wheat flour, half white, and instant yeast. 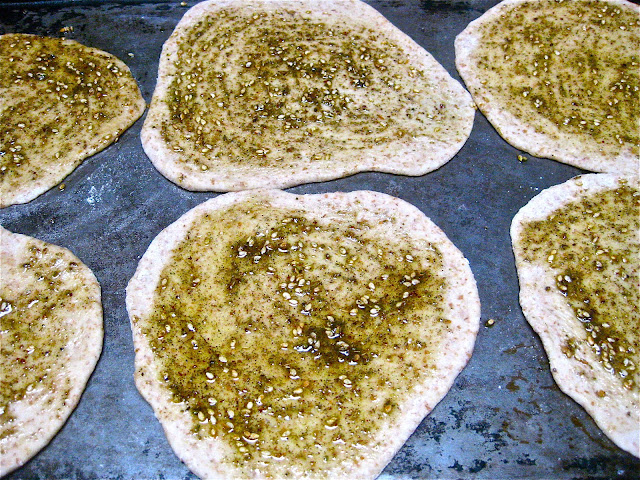 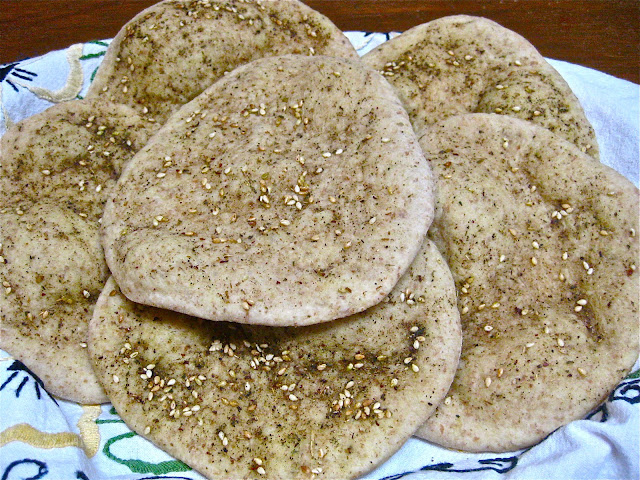 Manoush:  Freshly baked pita bread with the za'atar-olive oil mixture--yes, on a Mexican tortilla cloth made by my friends' mother

Ways to Use the Za'atar Mix 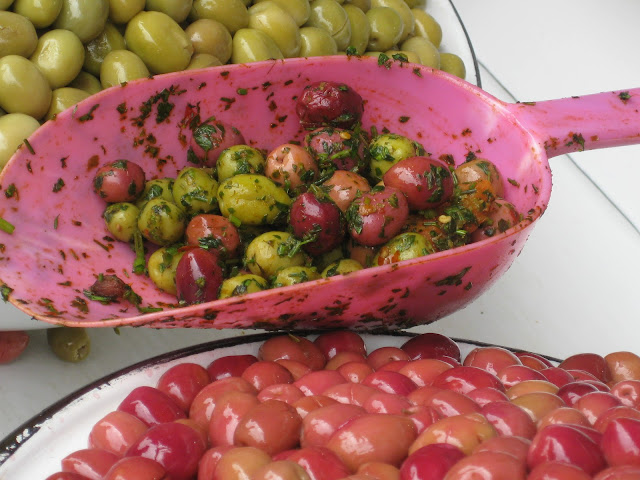 Moroccan olives from the Fès souk


I am submitting this post to Simona from Briciole who will be hosting both the English and Italian versions of Weekend Herb Blogging begun many years ago by Kalyn Denny of Kalyn's Kitchen.

©Victoria Challancin.  All Rights Reserved.
Recipes are meant to be shared, but please ask before using photos or text.  Thanks!

Posted by Victoria Challancin at 2:31 PM

Thank you so much for your za'atar recipe. Discovered the wonderful taste of this about a decade ago, but have always used a store bought mixture. And even more 'thank you's for all the ways to use this delightful spice mix. I have yet to grill fish with it and mean to try it on the chicken salad with pine nuts soonest!

Thanks for the background on za'atar, Victoria. I was introduced to the spice blend in recipes from Bella at AdventuressHeart.com, so it's good to finally know the history.

Will have to try it out with pita bread and olive oil to see if it sharpens my mind:)

Eha,
I always appreciate your thoughtful comments. Thank you!

Mark, Thank you for your comments and thank you for exposing me to Bella's blog (I wish she had a subscription option!). Let me know if it sharpens your mind--I'm still working on it ; )

I had never thought to make my own za'atar. Thanks so much for the recipe and all the information on this product and its versatility. I love the look of your homemade pita bread and with the za'atar on it, it would have an amazing flavour xx

I just found your blog and was really surprised to find za'atar. I do use it but never made it myself. Thanks for the inspiration!

Thank you for the creative uses for zaatar. I really love zaatar and you are right, ready mixes are not really authentic.
I love it on top of pita, it is called manousheh :)

Thank you for the fascinating history behind za'atar! I had a mix of my own in my cupboard and I love it served with quail eggs :)

Very nice post Victoria. Although I'm familiar with Za'atar, it's not something I keep at hand but now that I see the ingredients ... I guess I do, but just not to together in a blend. Love the addition of sesame seeds. And all the wonderful uses you suggest!

Thank you for "introducing" us to another ingredient, or another way to see or call it. hehe. Great recipe!

Lorraine, I love quail eggs with dukkah, but never thought to serve them with za'atar. Thanks for the idea!

Sawsan, thanks for reminding me the name for pita with za'atar--I do remember them being called manoush by Lebanese friends. I should go back and add that!

Very nice! I have a recipe for the flat bread you mention which is high on my to-do list. And I will come back to your recipe when I am ready to make my own za'atar. Thank you so much for contributing to WHB.

I always love stopping by because I learn a little history on food each visit. I love using za'atar and sumac in recipes. I find that each time I purchase both products they can be so different in taste.