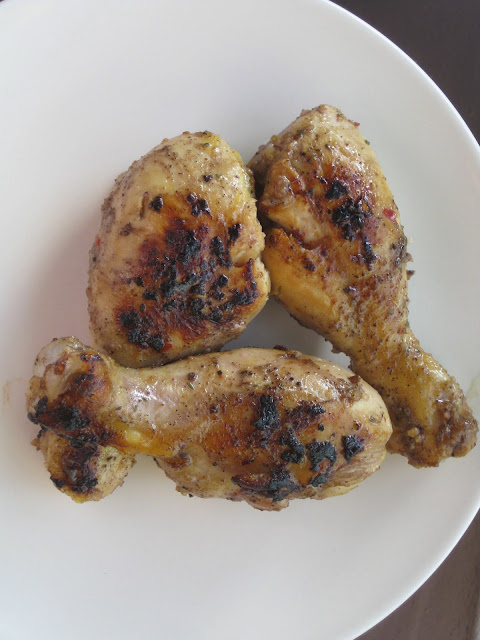 An unadorned plate of Jerk Chicken

Maëlle, my son's girlfriend, wanted to surprise my son while they were visiting Mexico over the holidays with a birthday party dinner starring many far-flung friends who were home visiting as well.  The idea was to throw a surprise party with a pirate theme, with everyone dressed in appropriate pirate attire.  As it turned out, Matey, the only pirate inspiration in the room ended up being the food, which Maëlle's  mother and I lovingly prepared for a hungry group of 20-year-olds.  And let me tell you, 20-year-olds can eat!  No more focus on a piñata,  no more hide and seek, just big appetites and much appreciation.

My contribution was Jerk Chicken and Rum Cake.  I hadn't made jerk in a while, but was exposed to some great recipes while growing up in South Florida.  Usually, if inspired to make a jerk recipe, I make a tray of my sister-in-law's recipe for jerk wings or perhaps a pork tenderloin with jerk flavors.  But because Jerk Chicken was specifically requested for this party, here it is-- definitely the kind of jerk we all want to run into.

Cook's Note:  The marinade has such fabulous and flavorful ingredients in it that I just had to boil it down (to make it safe to eat) and hope there was a use for it at the party.  It proved to be almost as popular as the succulent chicken as a dip for the Colombian patacones, or crispy fried plantains.  We even added some tortilla chips for dipping once the plantains ran out!  Delicious.  Don't waste the marinade!  I promise to get the recipe for the plantains soon.  And I'll add the made-from-scratch rum cake, so different than the box mixes I made as a child. 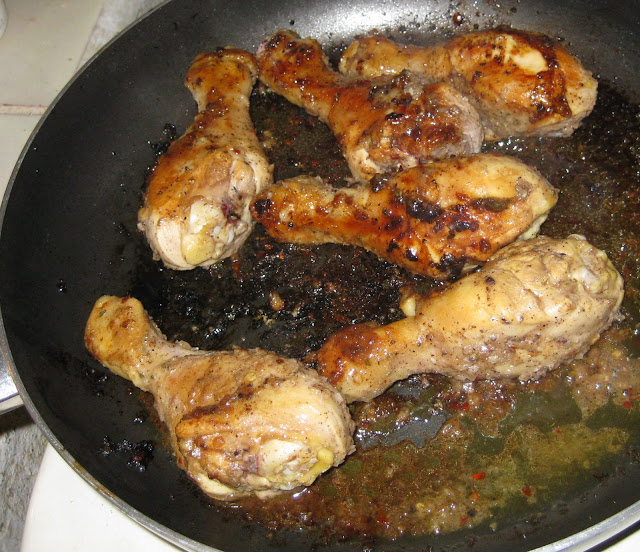 A Little History on Jerk

According to food history authorities, "jerk" is a bastardization of the Peruvian word charqui, which refers to dried strips of marinated meat  (i.e."jerky).  Apparently, as a verb, "to jerk" means to poke holes in the meat so that the spices and marinade could permeate.  Other theories abound as to the etymology of the word, but any way you choose to interpret it, today "jerk" refers to a Jamaican style of cooking chicken, beef, pork, goat, fish, vegetables, or fruits, in which the marinade or paste includes hot peppers and lots of spices.  For a more indepth article, go here for a good read from the Food History site.

Although recipes vary greatly from cook to cook, most Jerk Seasoning will contain Allspice (native to Jamaica), Scotch Bonnet Chiles, and Thyme.  It is always preferable to use whole, freshly toasted spices, but jerk seasoning can be purchased as a paste or a dry condiment as well.  In the Islands, jerk can be incendiary in terms of the heat level of the chiles, but I prefer to tone it down a bit.  The number and type of chiles, is, of course, up to you and your preferences. 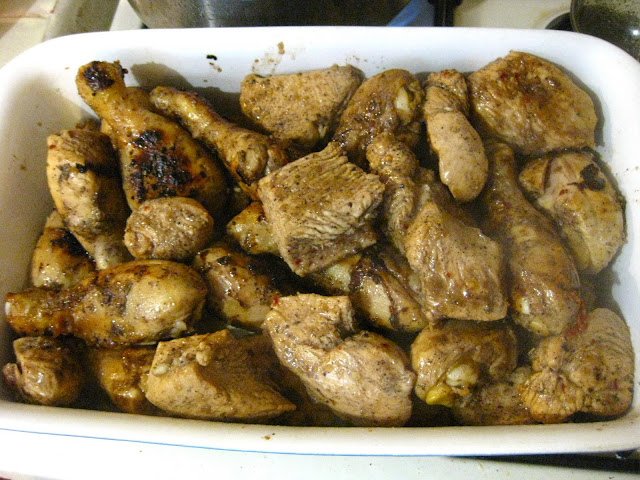 Notes:  I used 3 serrano chiles and 2 teaspoons of red pepper flakes because it was what I had on hand.  Because I was rushing, I didn't have time to let the chicken marinate for more than 2 hours, but an overnight marination time would be far better!  I have a large-capacity food processor, which worked perfectly for this recipe.  You could also make the marinade in batches, mixing it all together in a bowl if necessary.  This makes a lot of marinade (lucky for us!), so you could easily increase the amount of chicken used.  The choice of chicken pieces is up to you.  I was able to cook the marinade without adding extra liquid, but you could add a bit of orange juice or water if necessary.

Place the chicken in a large plastic bag or a metal bowl with the marinade.  SEal the bag or cover the bowl with plastic wrap and marinate overnight, if possible, in the refrigerator.

To cook, drain the chicken, saving the marinade.  Heat 2 tablespoons of the olive oil in a large nonstick skillet.  Cook the chicken in batches, adding more oil as necessary and turning frequently, until almost cooked through, approximately 15 minutes, depending on the size and type of the pieces.  Chicken should be browned and caramelized on the outside.  Place the chicken in a large baking dish and cover with aluminum foil.   Bake for 15 minutes, turn chicken, replace the aluminum foil, and bake for another 15 minutes or until completely cooked with the juices running clear.

To cook the marinade:  Because the reserved marinade has been in contact with raw chicken, it must be cooked to be safe to eat.  Place the marinade in heavy saucepan and bring to a boil.  Reduce the heat and simmer for 30 minutes, adding a bit of water or orange juice if necessary to prevent burning.  Serve with fried plantains, crudités, cheese, or corn chips--or just about anything! 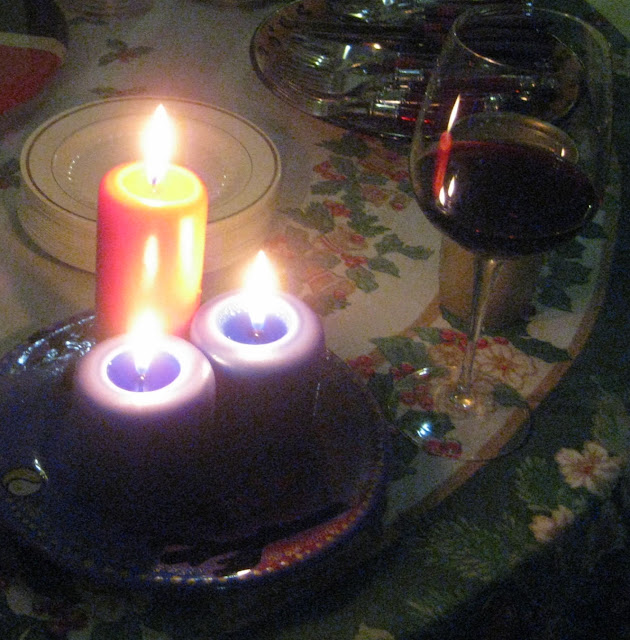 How lovely Victoria of your son's girlfriend to want to throw a party for him. I'm sure he had the best birthday. I love jerk chicken. I just love all of those Jamaican flavours. Your image of the chicken caramalising in the pan is very inviting! I hope you had a good time at the party too.

Thanks, Charlie Louie. I'm so glad you liked the photo--I thought it a horridly "brown" blog post, because I took the photos just before running out the door, without time to decorate! But the flavors...the flavors...

That looks so full of flavour and I'm sure when the 20 year old saw it they suddenly became even more ravenous! :D

Your fabulous jerk chicken reminded me that I haven't made it in a long time! I love your recipe-it encompasses the entire gamut of jerk marinades. Thanks for the history of jerk. You didn't need any adornment for the jerk chicken, it looks delicious!

I really like the idea of cooking the marinade and serving it as sauce. Too often a good marinade goes to waste. Thanks also for the tip about cooking it for safety reasons.

I just LOVE that marinade.. it sounds good enough to drink..I can't wait to try your recipe

Jerk seasoning in a packet is rare enough in Sydney that I have trouble finding it. Maybe home-made it the way to go.

The allspice is truly essential for this recipe, so I hope you can find them. This recipe is really, really good, so do try it if you can get the ingredients!

nice opinion. thanks for sharing...