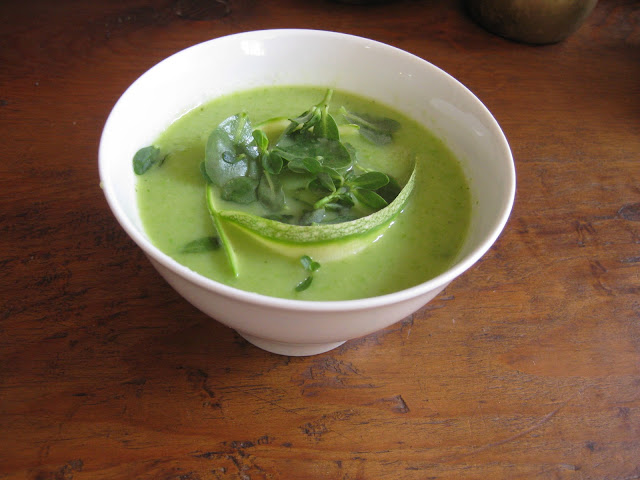 In 2008 I began a post called Purslane:  Weed, Culinary Star, and Cure-all with these words:
"What common edible weed has six times more vitamin E than spinach, seven times more beta carotene than carrots, and more Omega-3 fatty acids than any other leafy vegetable plant? Purslane. Gathered in the wild throughout the world, this nutrient-rich plant has been used as a medicine for over 2000 years and for 10,000 years or more as a food source. And now it is creeping its way back onto American tables. Why?"
As I reread that post, I smiled, remembering my first encounters with purslane so long ago when I lived in Bahrain, where it is much-appreciated in salads.  Now I live in Mexico, where although purslane (verdolagas in Spanish) is consumed cooked, I have to actively "sell" it as a salad ingredient.  In my cooking class for Professional Mexican Cooks this week, we made this lovely soup.   I could tell the cooks were skeptical at first, but one taste of this refreshing soup proved enough to make them reconsider purslane as a raw ingredient. The purslane was a hit.  As it will be with you if you try this easy recipe from the current June issue of Food and Wine.
Cook's Notes:  We omitted the olive oil drizzle, though it would make both a pretty and tasty addition.
Chilled Zucchini Soup with Purslane
(Recipe from Food and Wine, June 2011)
ACTIVE: 25 MIN                              TOTAL TIME: 45 MIN PLUS 3 HR CHILLING
SERVINGS: 12
2 tablespoons extra-virgin olive oil, plus more for drizzling
1 small onion, thinly sliced
2 garlic cloves, thinly sliced
1 teaspoon thyme leaves
1 bay leaf
8 small zucchini (3 pounds), thinly sliced, plus long zucchini shavings for garnish
Kosher salt
3 cups water
2 tablespoons finely shredded basil
2 cups ice
Freshly ground pepper
2 cups purslane leaves and small stems
In a large saucepan, heat the 2 tablespoons of olive oil. Add the onion and garlic and cook over moderate heat until translucent, about 8 minutes. Stir in the thyme and bay leaf and cook until fragrant, about 1 minute. Add the sliced zucchini, season with salt and cook, stirring occasionally, until tender, about 10 minutes. Add the water and bring to a boil. Remove the saucepan from the heat. Discard the bay leaf and stir in the shredded basil.
Working in batches, puree the soup in a blender until very smooth. Transfer the zucchini puree to a large bowl. Stir in the ice. Refrigerate the zucchini soup for at least 3 hours, until thoroughly chilled.
Season the soup with salt and pepper. Ladle into shallow bowls and top with a small handful of purslane and zucchini shavings. Drizzle with olive oil and serve.
MAKE AHEAD
The zucchini soup can be refrigerated for up to 1 day. 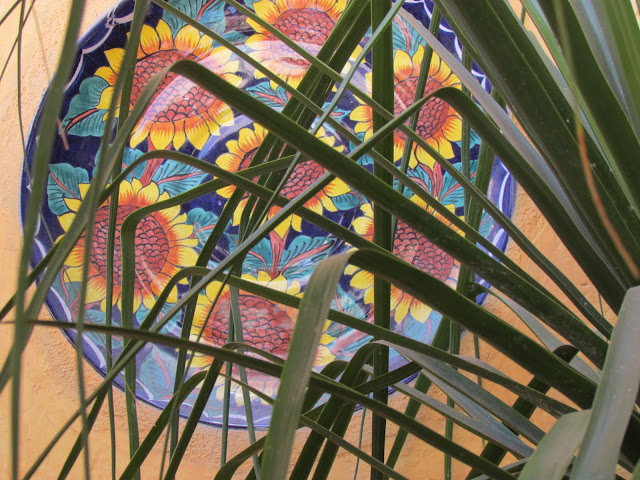 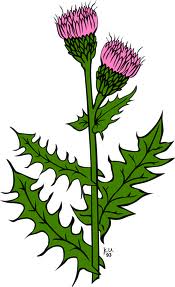 Posted by Victoria Challancin at 8:52 AM

Victoria, you've inspired me to cook with purslane! And it is soup weather so this would be delicious :D

Interesting weed, and I love how you used it in a chilled soup. It's that time of the year when they taste even better. hehe.