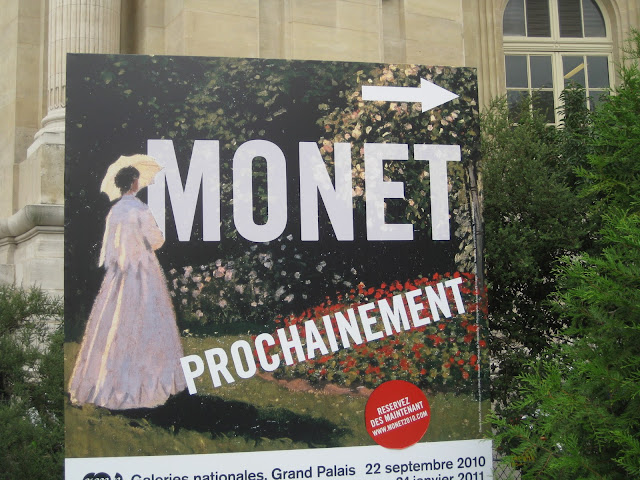 When I was in Paris in early September, before going to Istanbul, I was titillated by this poster at the Grand Palais.  And yes, I was able to see this incredible exhibition of almost 200 works by Monet while in Paris.  But this story is about what happened in Istanbul, before I took in this amazing exhibit. 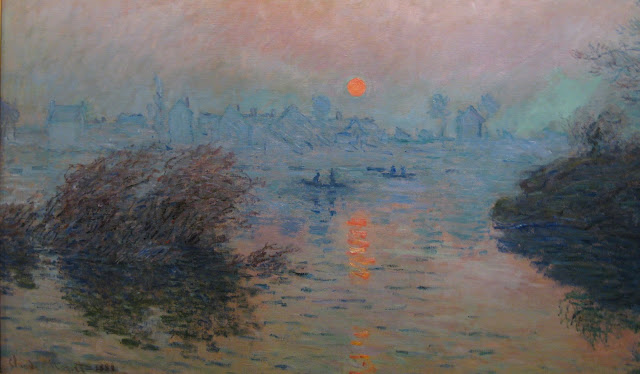 No, I didn't paint this, though I certainly wish I had                                                            Painting by Claude Monet
I Am Monet
by Victoria Challancin
Okay.  I'm not Monet.  I can't even really paint.  But I do admit to having had the great Master's spirit course through me recently while I was in Istanbul.  You are incredulous?  Just read a bit more and feel a touch of empathy.
It all started a few weeks ago when I stood on the balcony of my hotel in the Old Quarter of Istanbul, gazing at the famed Blue Mosque, with the changing waters of the Bosphorus shimmering behind it.  I took it in again, as I had so many years ago, swallowed its size, absorbed its beauty, allowed its majesty to permeate my being as the call to prayer washed over me, reminding me to connect with my essence, with my Source until the bare facts pushed through my musings, momentarily nudging lofty thoughts aside:
Fact:  The Sultan Ahmed Mosque (Sultanahmet Camii, in Turkish) was built between 1609 and 1616.  Fact: It is known as the Blue Mosque because of the blue Iznik tiles which adorn the interior walls.  Fact:  Mimar Sinan was the architect.  Mimar Sinan...the architect I admire most...Fact:  Architectural details include more than 200 stained glass windows, domes, semi-domes, columns, hexagons, tiles, and a mihrab (a niche in the wall that points the way to Mecca, the direction of prayer for all Muslims) that was decorated with a jade rose and gilt, and so much more.  Fact: It faces the Hagia Sofia, presenting an eternal dual of complimentary, yet differing splendors.  Fact:  It has six minarets (considered presumptuous at the time, sparking the powers in Mecca to add a seventh minaret to the great mosque there).  Fact:  It has the funny elements of a squat Byzantine church graced with soaring minarets--grounding us to the Earth, lifting us to the Heavens.  Fact. Yes, so many facts.  Facts that do little to suggest the majesty of the structure, the moving beauty of its totality.
So why Monet, you might rightly ask?  Why indeed?  It's the light.  The magical, ethereal light that bathes this incredible building throughout the day:  that kisses it at dawn, bathes it with brilliance at mid-day, shrouds it with mystery in the mist, softens its edges at dusk, makes it glow, perfectly lit, at night.  If Monet had been here, he would have painted it at every hour of the day, breaking that light into fragments that still held together the whole, that still conveyed the majesty, the magnificence of its dignified simplicity.  No, I am not Monet. I am just a visitor...a visitor with a point-and-shoot camera, a woman on a balcony with stars in her eyes, desperately trying to capture even a fraction of its splendor and what I feel when I gaze at its loveliness any time of day.
Art lovers know well the various series that Claude Monet, father of Impressionism, painted in different light:  Rouen Cathedral, the Banks of the Seine, Gare St-Lazare, the Houses of Parliament (UK), the Haystacks, Waterloo Bridge, the Japanese bridge, and, of course, the waterlilies at Giverny.  In each of these series of paintings, Monet obsessed about the light, the changing weather conditions, the colors and   the meaning, the metaphor behind them all.  That is what I felt in Istanbul, standing alone, looking at true majesty, silly camera in hand...not an artist.  And just for a moment, a fleeting blip in time, as I processed even fragmentally what I imagined Monet might have felt as he worked, I was eternal, an artist making her mark, processing the Universe in color, light, movement, and space. 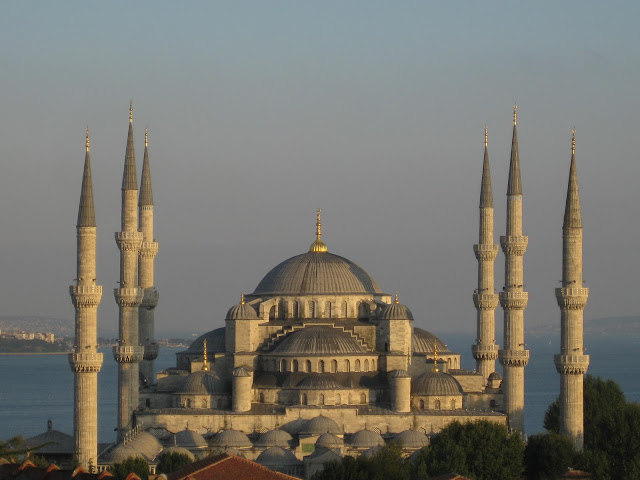 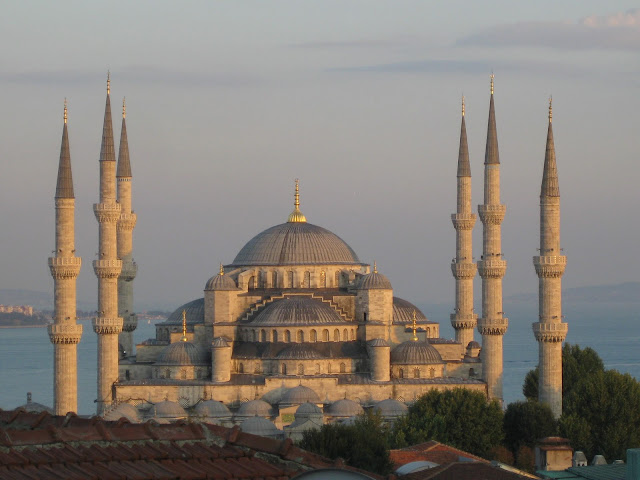 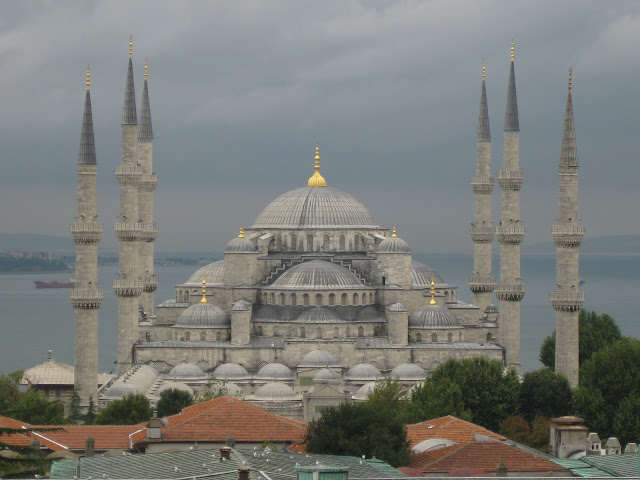 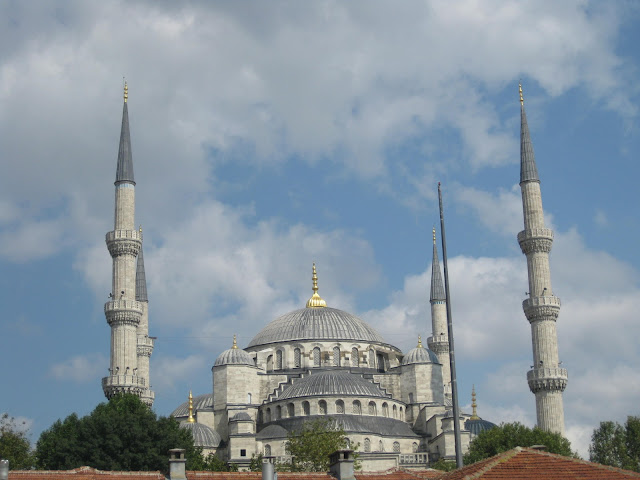 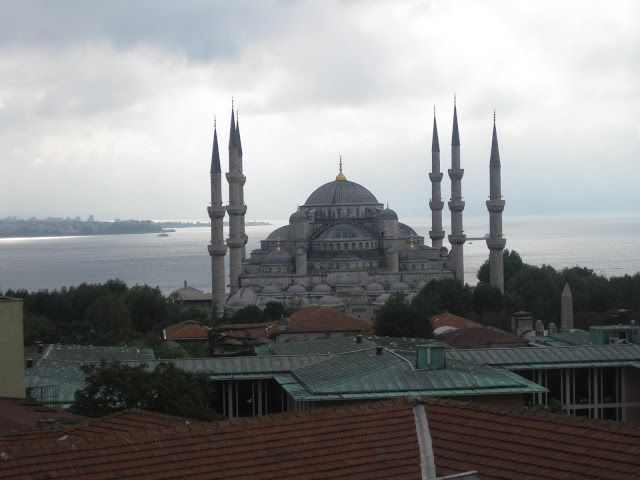 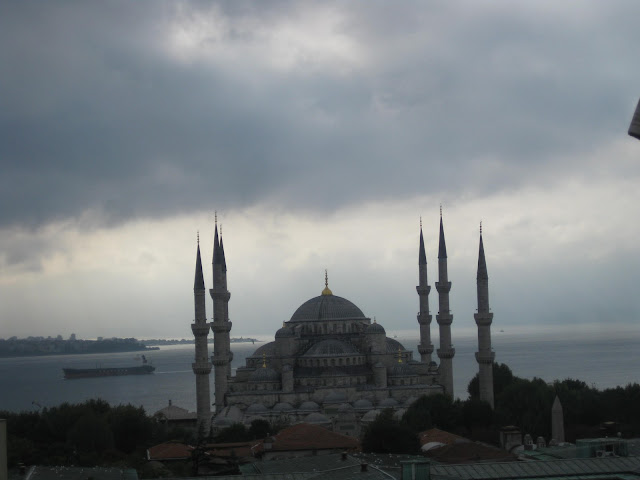 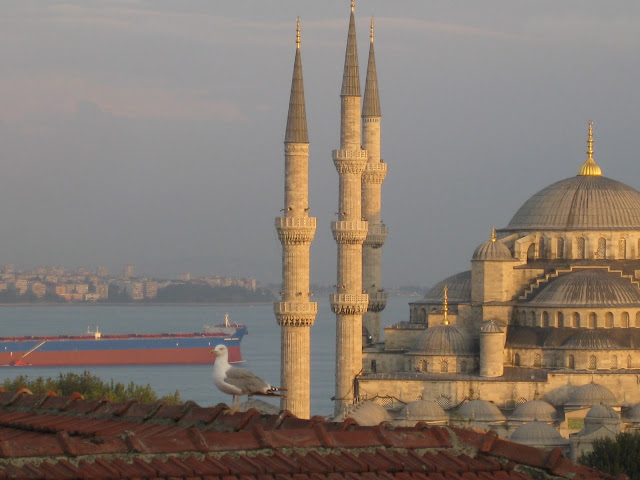 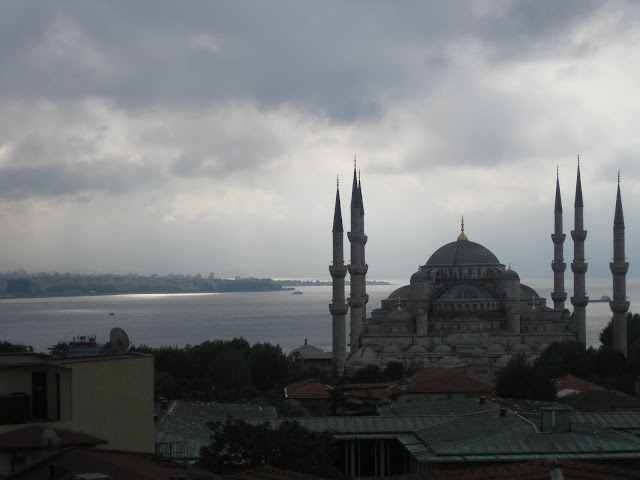 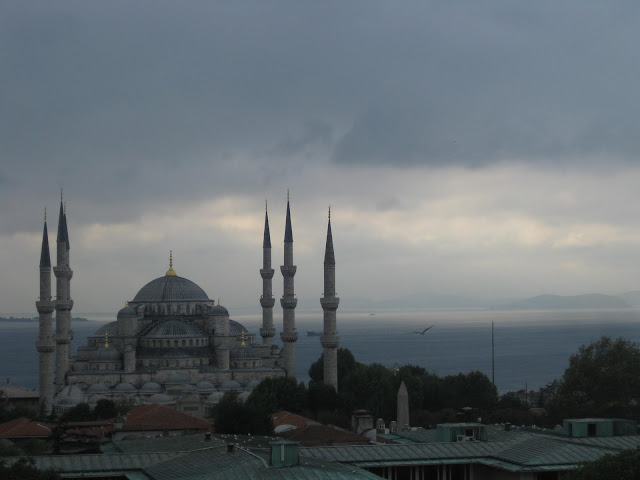 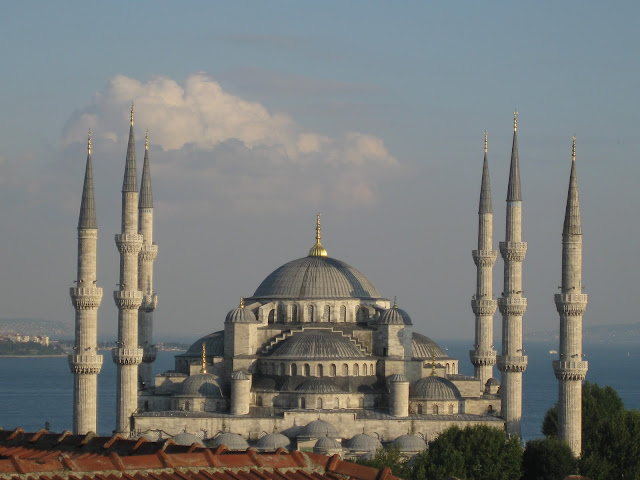 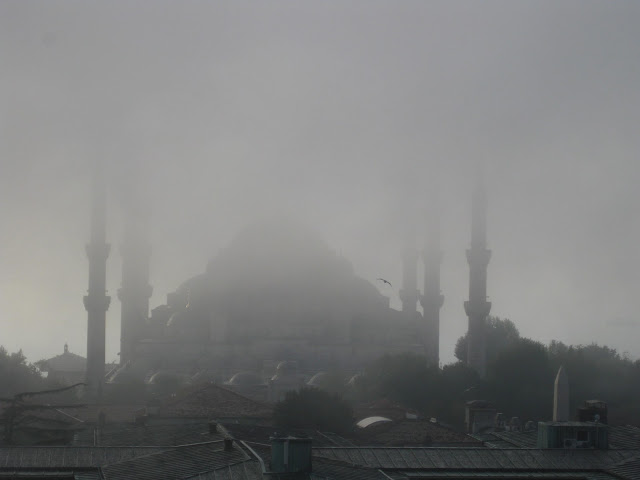 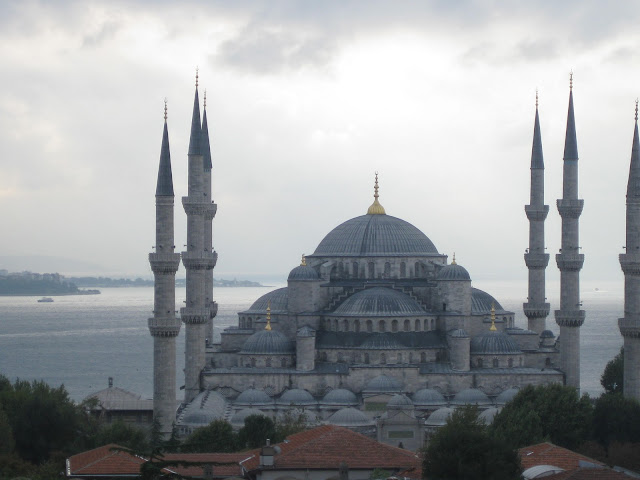 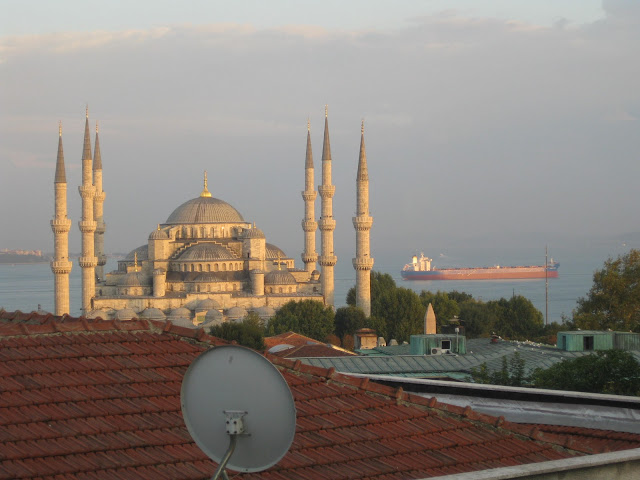 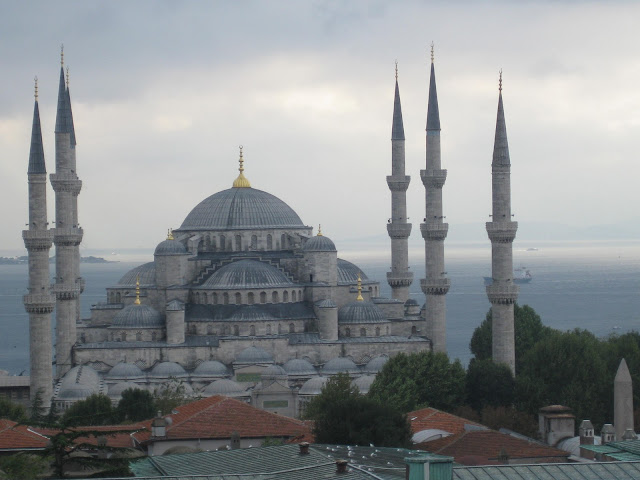 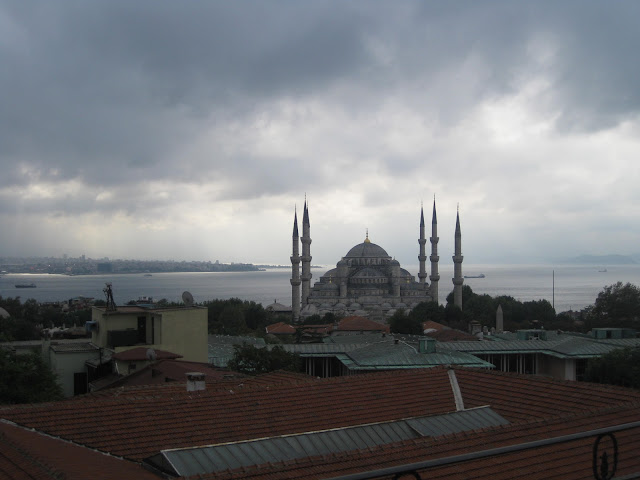 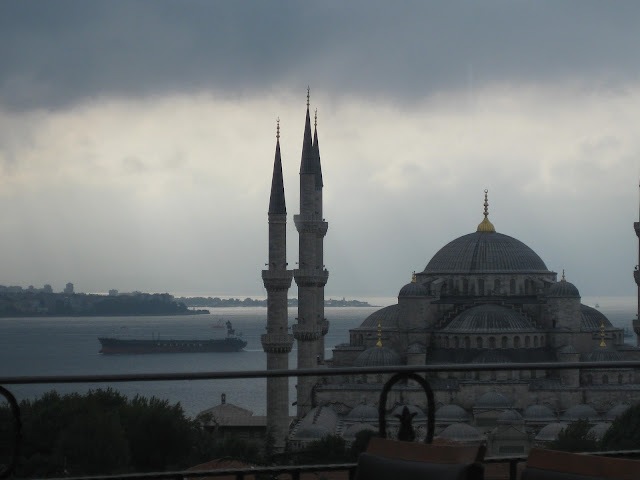 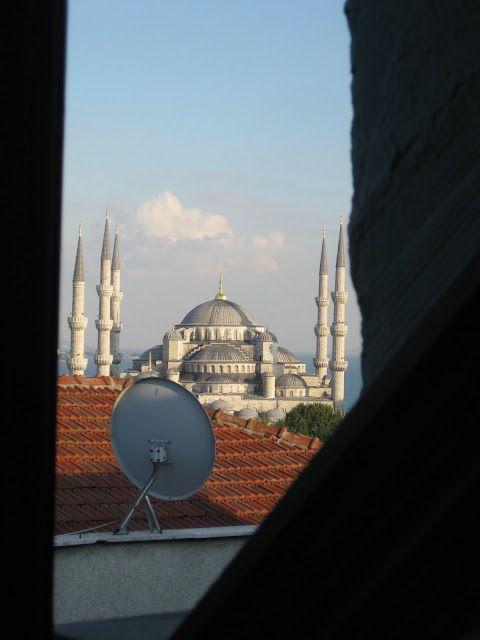 Stay tuned...I will be announcing my next tour with Flavors of the Sun Travel to both Paris and Istanbul very soon.
Posted by Victoria Challancin at 6:49 AM

Email ThisBlogThis!Share to TwitterShare to FacebookShare to Pinterest
Labels: Flavors of the Sun Travel, I Am Monet, Istanbul, Monet, Paris, The Blue Mosque, Victoria Challancin