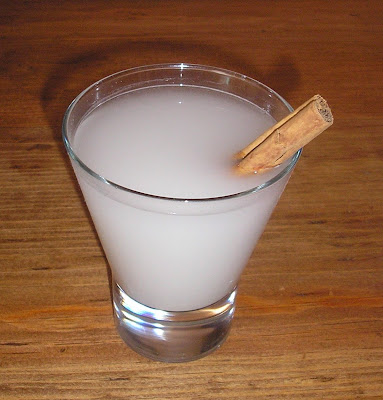 Horchata de Avena, a refreshing drink made with rolled oats

Throughout history all over the world, man has made drinks from nuts, seeds, and grains. Whereas milk products spoil easily, these refreshing drinks do not. And they are both nutritious and a boon to those who are lactose-intolerant. Almonds, barley, melon and sesame seeds, and rice are just a few of the most popular foods used as the basis for drinks sweetened with honey, and later sugar. Sometimes spices are added, sometimes not.

Almond milk, for example, was very popular in cooking during the Middle Ages in Europe and is frequently listed as an ingredient in a variety of recipes in cookbooks from that period. Suitable for consumption during Lent, it also was used as a milk substitute as highly perishable milk itself was frequently made into cheese or butter. Almond milk was, and still is, a very popular drink throughout the Islamic world as well.

In Spain and Latin America, horchata (from the Latin word hordeum, which means "barley"), is the common name given to a variety of vegetable-based drinks. In Spain itself and particularly in Valencia, a tuber called chufa, or tiger nut (Cyperaceae cyperus esculentus), is the basis of the most popular horchata. This plant, which originated in the Nile Delta, was probably brought to Spain by those early prolific traders, the Phoenicians, and certainly centuries later by the Moors.

The Spanish, in turn, transported their beloved orxata, later horchata, to the New World, where it flourished as a refreshing, nutritious, and economical drink. Chufa nuts weren’t available, but other plant parts were. The Aztecs made horchata from melon and squash seeds; in fact, in the blog entry I wrote on Aguas Frescas, I gave a recipe for a cantaloupe-seed agua fresca that could easily qualify by definition as an horchata. Corn and peanuts find their way into various horchatas as well. Specific horchatas are popular in various countries: in Puerto Rico, sesame seeds are often used; in Nicaragua the indigenous jicaro seeds (Crescentia alata) form the basis for the most popular horchata; in El Salvador the seeds from the fruit of the Calabash tree are used (Crescentia cujete); and in Mexico rice horchata with or without blanched, ground almonds is sold from large glass jars in almost every market. Today, unfortunately, packets of chemical-laden mixes are popular and readily available to make horchata in Mexico; however, the natural drink itself could not be simpler to prepare:

Soak the rice and cinnamon stick in water overnight, puree in a blender, strain, and sweeten to taste. Serve over ice or well-chilled.

Note: Some recipes call for cooking the rice, but the way I learned to make this from Mexican friends seems to yield a richer, more full-flavored drink. Blanched almonds can also be soaked with the rice. Some people also add a touch of vanilla extract or almond extract as well.

Another form of horchata that a Mexican friend prepared for me was made from oats. She assures me this is a very common horchata in the Mexican state of Nayarit. The soaking time, if using rolled oats, is much less than for rice.

Soak the oats and cinnamon in water for a minimum of half an hour. Blend, strain, and sweeten to taste. Serve over ice or well-chilled.

Note: I add more oatmeal if making this for my son as he prefers a really creamy horchata. This is a flexible recipe—make it to your taste.

Simple, refreshing, cheap, and relatively nutritious. What could be easier?

Posted by Victoria Challancin at 2:47 PM

Great recipe! My wife loves Horchata (rice) so I'm going to attempt to make it this weekend, for her bday. For some reason I though it was much more complicated!

I'll let you know how it comes out!