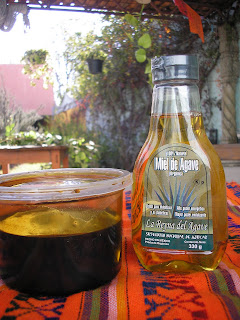 Agave Nectar: Sweetener of the Gods or Gourmet Hype?
It’s really true, in the culinary world at least, that there is ‘nothing new under the sun.’ Although health food stores and hip followers of current food trends are lately touting the joys and benefits of agave nectar, often called agave syrup, as the newest darling of natural sweeteners, the indigenous people of Mesoamerica have prized it for millennia. While modern markets may get a boost from such popular sources as Dr. Mehmet Oz, whose recent recommendation of it on The Oprah Winfrey Show as the “healthiest sweetener” prompted a surge in U.S. sales, the ancient people of Mexico, totally unaware of what we now know as “The Oprah Effect”, needed no hype to understand the value of the agave in all its uses.

Unrefined and commercial agave nectar
A Little History on the Plant Itself:

Most of us recognize agave as the succulent plant from which tequila is made, but for thousands of years the native people of Mesoamerica used it for far more than an intoxicating drink. Prized by the Aztecs as a gift from the gods and still called El Árbol de Maravillas (The Tree of Wonders) by modern Mexicans, the agave plant was used not only in food preparation and ritual, but also as a fiber for cloth, a building material, a natural armed fence, rope, brushes, animal fodder, fuel, paper, threads, needles, shoes, nails, and weapons. This plant, which the ancients believed to be sacred, was considered a purifier of body and soul. Its sociological influence during both the Pre-Hispanic and Colonial periods of Mexican history is evidenced in its mythology, religious rituals, medicinal uses, and economy.

In mythology, the pulque gods, who wore a half-moon made of bone in their noses, were considered lunar beings that represented life, death, and rebirth as well as the celebration of the harvest. Agaves were planted around temples and were represented in stone carvings as Nahuatl glyphs. For ritual purposes fermented agave juice was served to priests to increase their enthusiasm during rituals of sacrifice. For the sacrificial victims themselves, the drink was given to ease their suffering. Today, agave is still touted in various forms as “medicine”; in fact, one online botica, or apothecary, still makes promises that agave essence will cure "emotional immaturity, aggressive conduct, impatience, fatigue and premature aging.” And as for its roll in the economy, you need only think of the lucrative tequila and mezcal (also written mescal) industries, never mind that the Spanish used it as a source of taxation.
Roasted agave in the market, San Miguel de Allende, Mexico 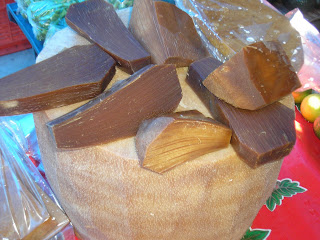 As a food source it appeared thousands of years ago in the form of wines and aguamiel, pulque (naturally fermented aguamiel), honey, vinegar, sugar (or sweetener), a thickening agent, and a pit-baked vegetable. After the introduction of the distilling process by the Spanish, agave became widely popular in the form of the alcoholic elixirs mezcal and tequila. And recently, it has seen another reinvention as the newly popular agave nectar, or syrup.

The nomenclature surrounding agave can be as complex as its history. The Spanish, who identified the native Mexican plant with a similar looking one found in Spain, called it maguey. The word agave itself, though it is routinely associated with the tequila industry, actually refers to the scientific genus of the plant. Today the terms maguey and agave are often interchangeable. The etymology of the word agave comes from the Greek aguae, which, via a circuitous route leads us to the idea of “noble,” perhaps due to the stately beauty of the astonishing single flower it produces once before dying. If maguey and agave have been intertwined in usage, it is nothing compared to the mix-ups over aguamiel, pulque, mezcal, and tequila. But we’ll save that for another post. And that brings us to the following:

Why the resurgence of interest in agave nectar? 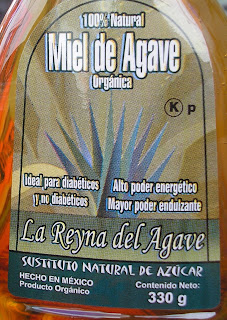 Agave nectar, a commercially-made product from Mexico, is made from the juice of several species of agave, the plant from which we get tequila. And Mexico’s prized blue agave plant, from which comes the finest tequila, produces a juice higher in fructose-producing carbohydrates that yield the best nectar as well.

When expressed as a liquid from the core of the plant, or the piña, as it is called in Spanish, the juice is filtered, then heated (to hydrolyze carbohydrates into sugars) without the aid of chemical additives, and finally concentrated into a somewhat thin natural syrup. Because this syrup has a low glycemic index (GI)—a measure of how glucose affects blood sugar levels or how high your blood sugar rises when you eat certain foods —it appeals to people with dietary concerns and is usually tolerated well by diabetics. Composed primarily of easily digested fructose (up to 92% depending on the species of plant used and the producer) and smaller amounts of glucose (up to 8%), it is rapidly becoming a popular alternative to cane sugar. And while it is similar to honey, which has a GI of 83, agave nectar, with its GI of only 27, is absorbed more slowly into the bloodstream thus helping to avoid the yo-yo effect of the dreaded sugar highs and lows. Another difference that enhances its appeal is that agave nectar, unlike honey and sugar, can be easily dissolved in cold liquids.


What does this all mean to you, the consumer, the cook?

Culinary Uses, Recipe Sources, and other Tidbits:
Agave nectar can be used wherever you would ordinarily use sugar, honey, or artificial (gasp!) sweeteners. A little experimentation may be necessary to find what works best for you, but the following guidelines may help: 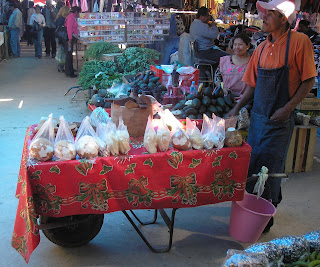 The Agave Vendor and his products in the Tuesday Market, January 29, 2008
San Miguel de Allende, Mexico

Posted by Victoria Challancin at 2:46 PM

Victoria,
Thanks for this info. I've had a bottle of Agave Nectar on my shelf for ages and didn't know what to do with it! Now I'll try it in several dishes.

Where we can buy this brand in USA