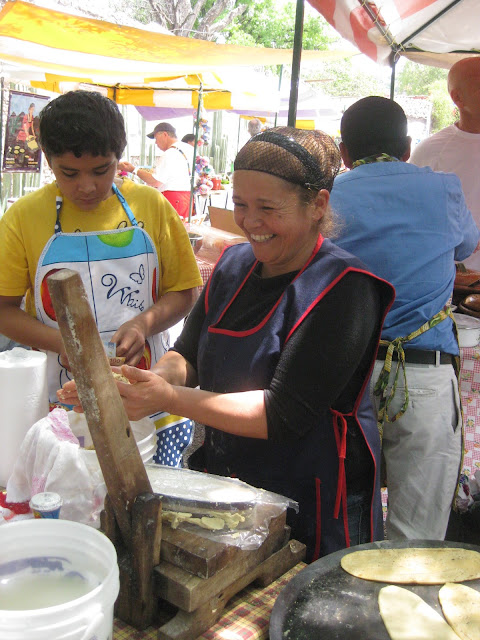 I smile when I see "Cinco de Mayo" splashed all over the internet, complete with recipes, how to celebrate, how to decorate, and more.  Here in San Miguel de Allende, Mexico, it passes with barely a blink.  In fact, except for in the Mexican state of Puebla, where it commemorates the Battle of Puebla, it isn't a huge celebration at all in Mexico.  However, in the US, it's an entirely different event, an otra onda.  All over the US, especially in San Antonio, Texas, Phoenix, Arizona, Chicago, Illinois, and throughout the state of California, Cinco de Mayo is embraced to the fullest as a way to honor and celebrate Mexican heritage and pride.

The meaning behind the holiday is to celebrate the totally unlikely victory of the Mexican army against the well-armed French forces at the Battle of Puebla on May 5, 1862 (hence cinco de mayo, or May 5th), after which no country in the Americas has been invaded by any other European military force.  Significant, indeed.  And today, it is a rousing tribute to the spirit of the Mexican people, glorifying their heritage through fiestas, food, culture, art, parades, and more.

Because I haven't prepared any special Mexican food to honor the day, I thought I would give you a pictorial view of the making of a beloved Mexican antojito, a snack popular in many forms throughout Mexico.  Others you might know are the corn-based tacos, enchiladas, tamales, tlacoyos, gorditas, sopes, as well as some wheat-based offerings such as molletes, tortas, pambozos, and empanadas--to name but a few.

If you think huaraches are woven Mexican sandals, you aren't wrong.  But if you are food-oriented, then perhaps what comes to mind are the oblong (huarache-shaped) masa harina-based snack food topped with all manner of goodness:  salsas, cheese, mushrooms, guisados (stews) or other protein, onions, tomatoes, cilantro, vegetables, and fresh cheese, to name but a few of the possibilites.  The oblong form of this corn dough treat is similar to the shape of the sole of a shoe, hence the term huarache.  The following series of photos is taken of one of my favorite market vendors of huaraches.  I must have eaten mine so quickly that I forgot to take a photo of the finished product, but I will show you one soon! 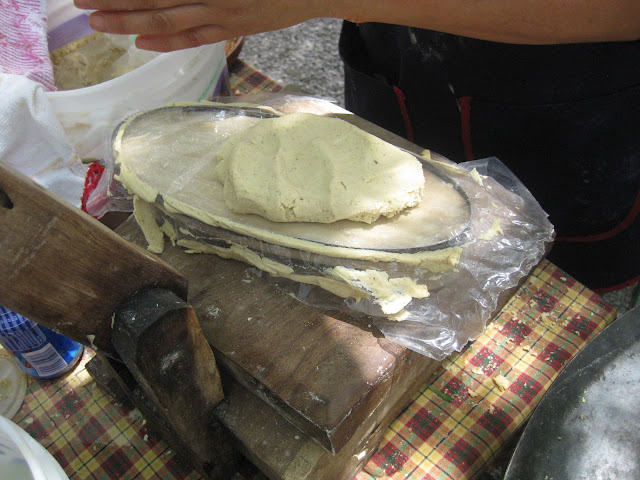 First, a blob of the prepared masa is placed on an oblong mold lined with plastic wrap 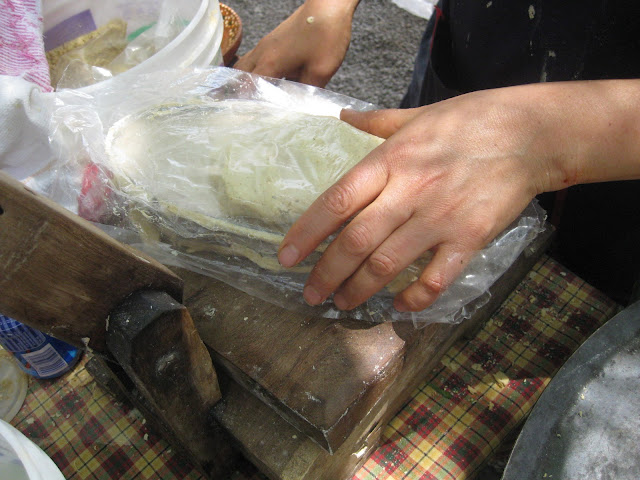 Next, a piece of plastic wrap is placed on top 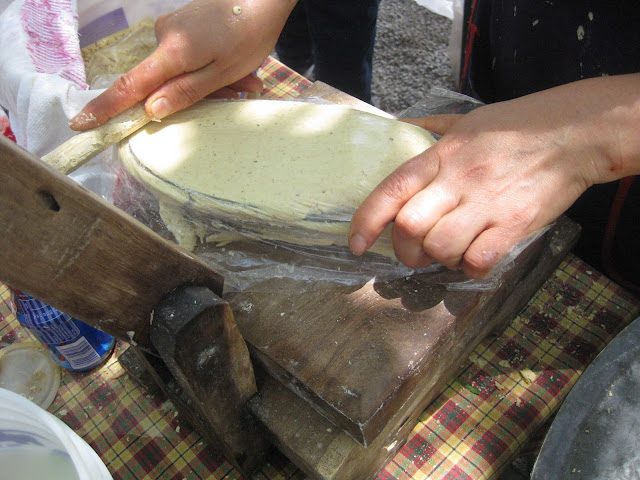 A dowel is used to roll over the top of the mold, filling it to the correct depth 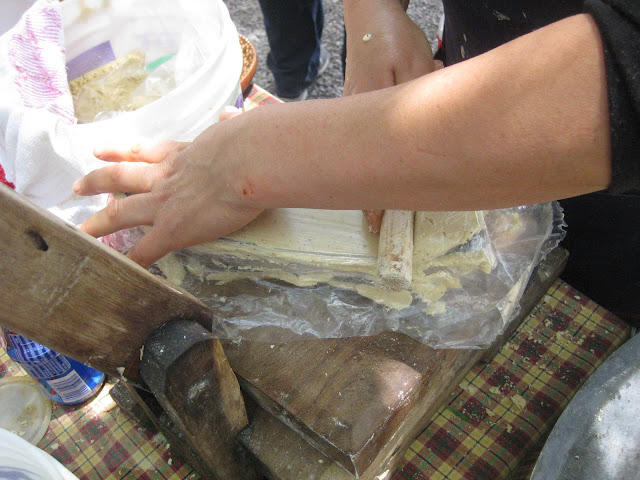 Any excess dough is reused 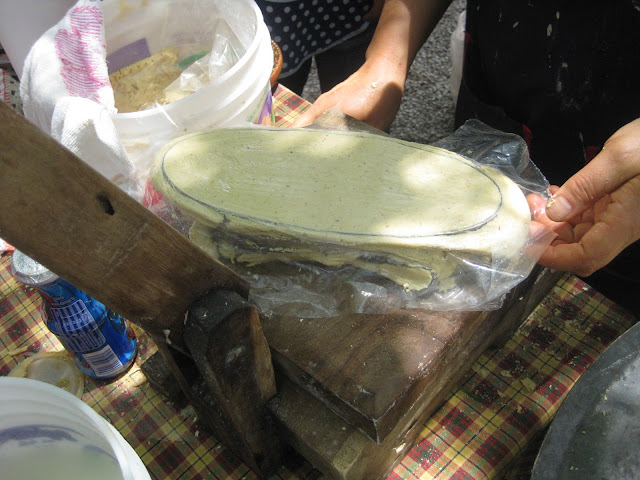 The huarache, ready for lift off 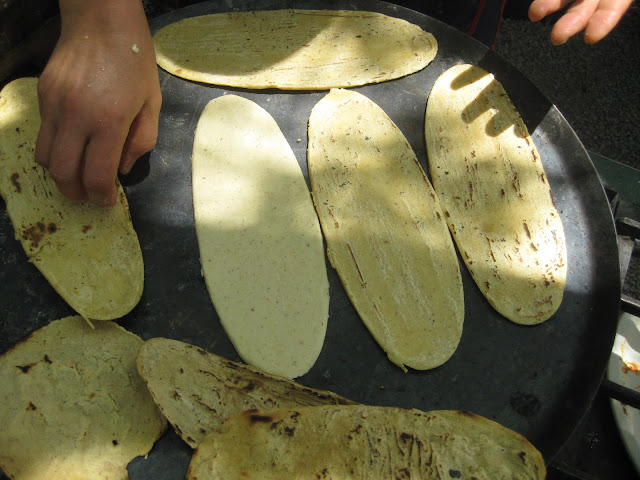 Huaraches, cooking on a comal, or griddle, set over coals 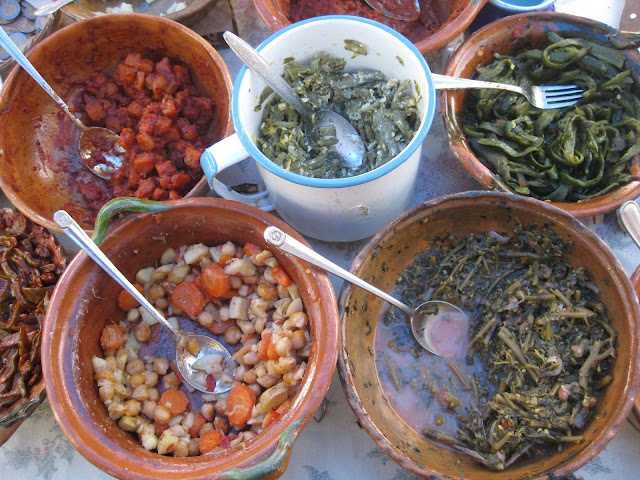 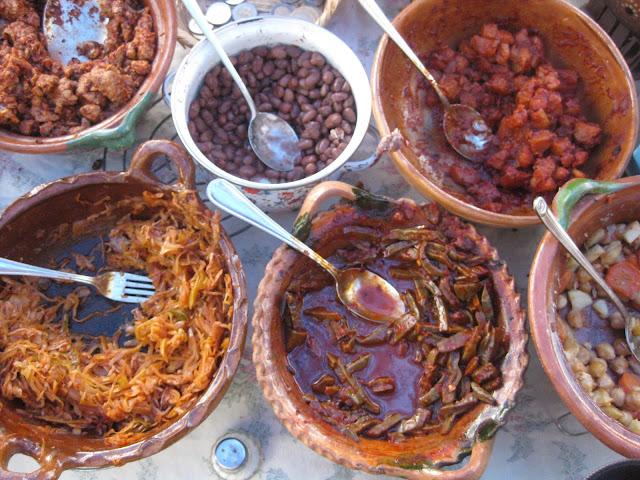 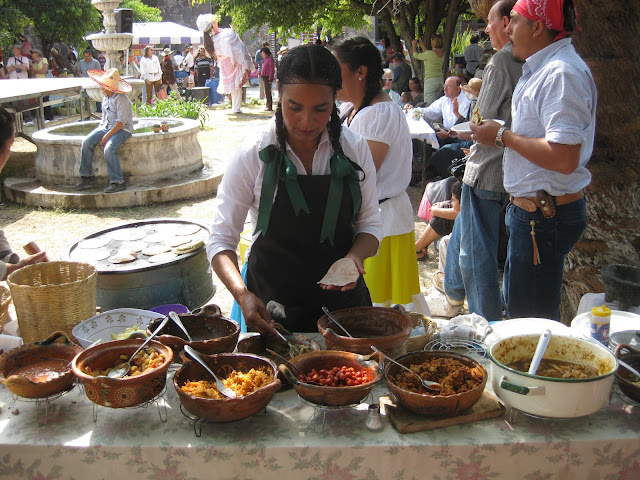 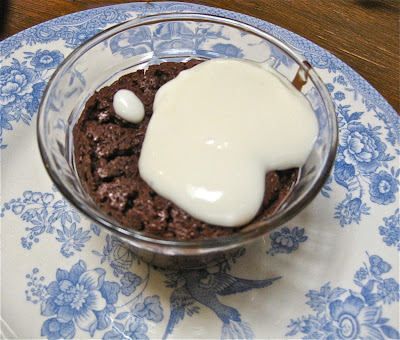 I almost didn't post this recipe because I just didn't have any photos in sharp focus, but finally I decided that it is too tasty to ignore in spite of the bad pictures.  One day I'll write in depth about that unbeatable combination of chiles and chocolate that hails from Mexico, but today I'll just leave you with that magical blending of flavors in a simple pudding-cake dessert.  The taste of the smoked chipotle chile is subtle here, but just enough to transform the ordinary into the sublime.

Cook's Notes:  This recipe actually made a couple of extra mini cakes which didn't fit into the baño maria pan.  I simply placed them on the rack in the oven without using the water bath, and they turned out just fine.  I used 2 full teaspoons of the chipotle adobo sauce, which gave the dessert just the tiniest kick of chile.  I think an extra teaspoon or so wouldn't go amiss, but use your own judgment to suit your particular taste.

In a medium saucepan combine the 1 cup sugar and the orange juice.  Bring to boiling over medium-high heat, stirring constantly.  Remove from heat; add chocolate and the 1/2 cup butter, stirring until melted.  Add eggs, one at a time, whisking well after each addition.  Stir in flour, adobo sauce, and salt.  Place prepared ramekins in a 13x9x2-inch baking pan.  Divide chocolate mixture evenly among the ramekins.  Place baking pan on oven rack.  Pour enough boiling water into the baking pan to reach halfway up the sides of the ramekins.

Bake for 30 to 35 minutes or until mixture is set (will not have a clean knife test).  Using tongs, carefully remove ramekins from the water.  Place on a wire rack; cool for 10 minutes.  If desired, invert onto individual desserts plates.  Serve warm with Sweet Crema.

In a small bowl stir together the crema or sour cream and sugar. 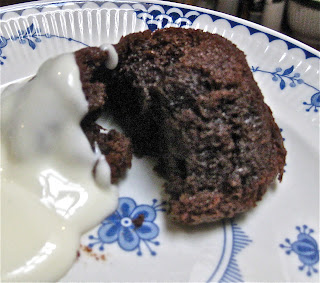 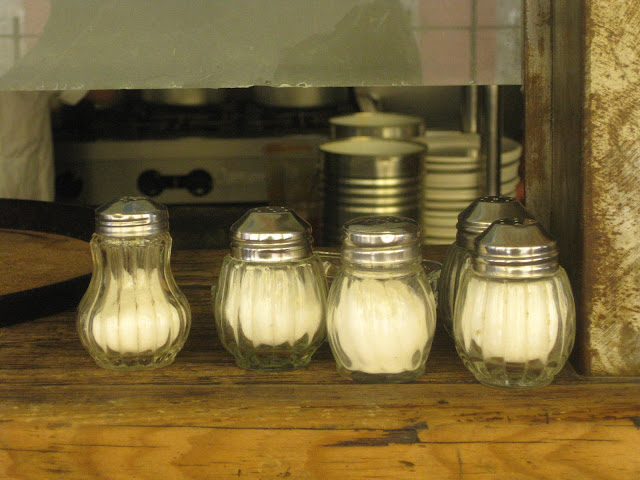 Recipes are meant to be shared, but please ask permission before using photos or text.  Thanks!

Posted by Victoria Challancin at 10:16 AM

I always enjoy your posts Victoria because they teach me something new. I have never heard of that celebration day for Mexico that's celebrated in the USA but not Mexico nor have I heard of these oblong looking pizza-type snacks. Lovely to see how these are cooked in the markets. xx

Awesome post! What a lovely and colorful place you live in! Fabulous food and very cool photos! Thanks!

I am certain there are a lot of competitions as to who has the most interesting huarache filling combos? What fun!!

Happy Cinco de Mayo! I love learning about your part of the world Victoria. I've never been but you make me feel like I'm there with you staying with you :)

Que Viva! This is a great post and now I am hungry. New York goes crazy on 5 de Mayo as the Corona's flow...by the way do you have a good recipe for tacos al pastor. It is one of my favorite and before making them I would like a recipe from an expert and that is you!

Norma, muybuenocookbook.com published just this week a tacos al pastor recipe with grilled pineapple salsa (to echo that love pineapple so often placed atop the real stuff) that looked good. I have only made them once as I have ready access to them and I want to say I might have used a Rick Bayless recipe, but I can't remember now.

Thanks for teaching me so much about this celebration - I love the customs and your food shots :D
Everything is so exotic!

Oh gosh this post is making me hungry! There would be no need to cook if I had this nearby. LOL! Love it!

And thanks for recommending my tacos al pastor recipe. I am eating my leftovers for lunch today. They always taste better the next day or a couple days later. Sooo yummy!

Hope you had a wonderful weekend.

You are most welcome, Yvette--but that was so easy to recommend because your recipe looked perfect!

I find it so interesting that Cinco de Mayo is celebrated so much here in the US. I think that everyone just likes to party. Even the Irish Pub in a nearby New Hampshire town had a clock counting down the days until Cinco de Mayo. Love the photos of your wonderful market.

That's great to see the Huaracahes stand with all the different fillings. Kind of like an Economy Rice stand in Malaysia when you get a plate of rice and choose your veggies and meats.

I'm sure Mexican food will explode in popularity in Southeast Asia soon.