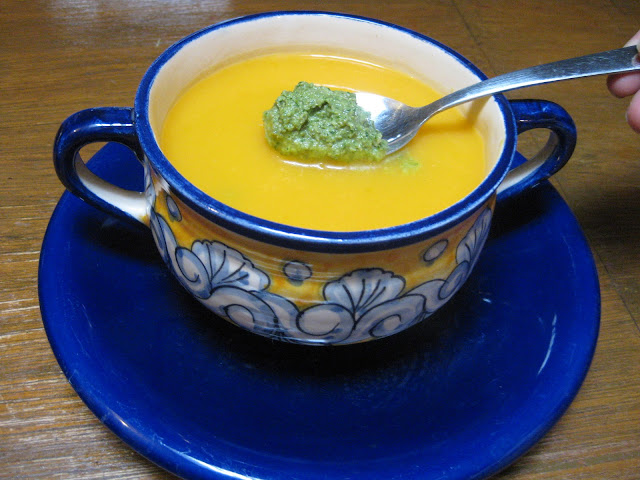 We should be experiencing cooler weather by now, here in the high central plateau of Central Mexico.  We should, but really the 80+ degree temperatures during the day belie the fact that we are quickly approaching winter.  Nights are cold, but that is mainly due to the altitude (the GPS says it is 6700 feet right at my front door!), but still...colder-weather food beckons.

Knowing that much of the modern-day squash developed from the wild squash that originated in Meso-America, I always found it surprising when I first moved to Central Mexico over twenty four years ago, that pumpkin was the only winter-type squash available here.  When the butternut variety of squash appeared in local markets a few years ago, I was thrilled!  Absolutely thrilled.  I love it roasted, puréed, in soups, raw or roasted in salads (check out the recipe for Raw Butternut Squash Salad with Maple-Cinnamon Vinaigrette here)--I love it in sweet recipes or in savory.  I love its versatility, texture, health benefits, and visual appeal.  (Scroll down for more on its history).  There's not much you can do with butternut squash that I don't like.  Hence, when I found this recipe earmarked in my files, I knew I had to make it.  And as an added extra, this soup is topped with a lively chutney--for those of you who doubt my love of chutney, check here, here, or here for some previous recipes.

This soup is lusciously smooth, easy to prepare, delicious, and pretty as well.  It came to my attention via an email from Yummly Recipes, which gives its origins as Gourmet Magazine.

Happy to have not one, but two recipes from magazines this week, all  ready to go, I'll submit this post to the Magazine Monday blog event, inaugurated in 2007 by Ivonne, of the always inspiring blog, Cream Puffs in Venice.  Ivonne posts links to other bloggers who have used magazine recipes.

(Adapted from a recipe from Gourmet Magazine)
Makes 8 servings.

Possible Variations:   Substitute 2 cups of coconut milk for two of the cups of broth, add a bit of grated ginger;  add dried cranberries or raisins to the chutney

Make the chutney:
In a blender or food processor blend the almonds, the coconut, the chile, a pinch of salt, and 1/3 cup water until the mixture is finely ground.  Add the coriander and blend the mixture until it is ground fine.  (Note:  This recipe makes what is known as a dry chutney, which has a slightly grainy texture).  The chutney may be made 8 hours in advance and kept covered and chilled.  Makes about 1 cup.

Make the soup:
In a kettle or Dutch oven cook the onion in the butter and oil over moderately low heat, stirring, until it is softened.  Add the squash and 1/2 cup water, and cook the mixture, covered, over moderately low heat for 20 to 30 minutes, or until the squash is tender.  Add the broth, the zest, and the juice of the orange and simmer the mixture, uncovered, for 15 minutes.  In a blender or food processor purée the mixture in batches and strain it through a sieve into a large bowl.  The soup may be made 1 day in advance and kept covered and chilled.

Ladle the soup into 8 bowls and garnish each serving with about a tablespoon of the chutney, to be stirred into the soup, and a coriander sprig. 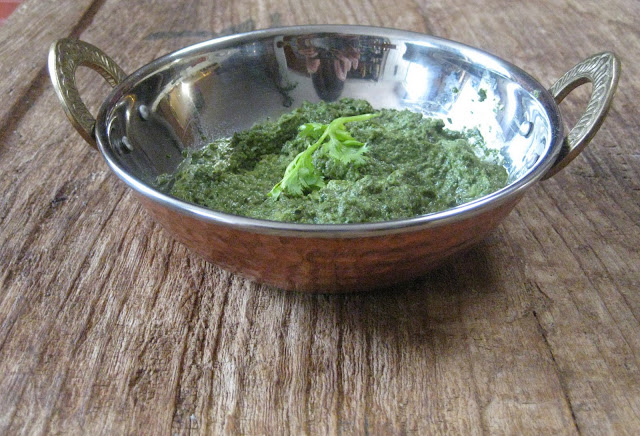 For a salad to accompany the soup, I chose a Roasted Pear Salad with Chèvre and Fig Vinaigrette. For the recipe and a couple of links to other Pear/Cheese combinations I adore, click here.  Notice that in one version of this salad I used Belgian endive for accent, and in this one purslane and watercress. 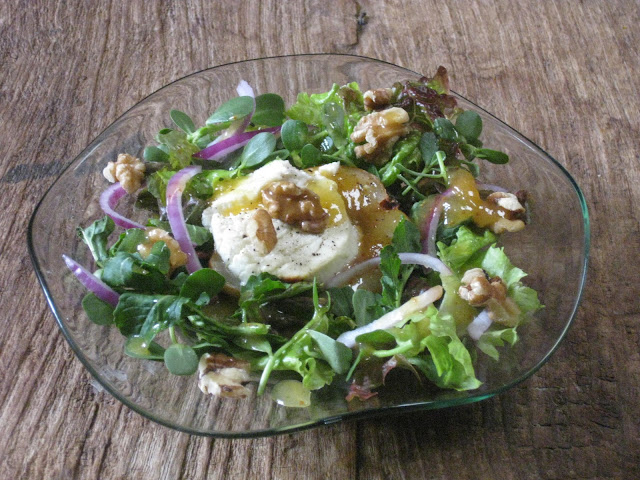 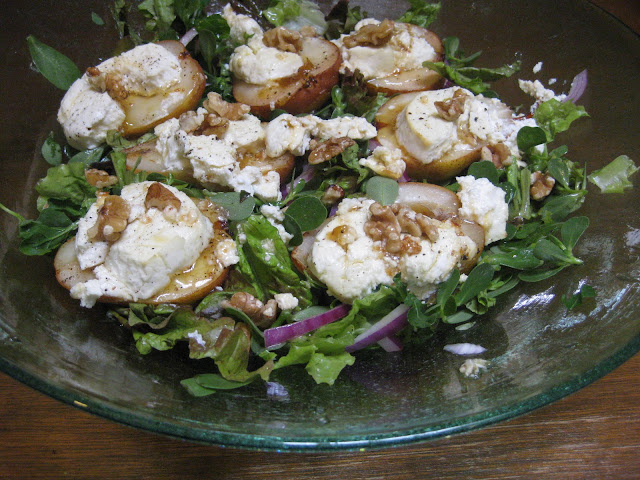 The salad, as a whole, served on another hand-blown Mexican glass platter

A Brief History of the Cucurbitaceae Family and Winter Squashes

Cucurbitaceae, refers to the family of gourds, and Cucurbita is the genus which was first cultivated in Mesoamerica.  This genus includes both the edible fruits such as squashes, pumpkins, marrows, and chilacayote, as well as gourds themselves.

It is thought that squash has been an important part of the Mesoamerican diet for at least 5000 years, and known that the Incas of Peru were cultivating them by the time the Spanish arrived.  Evidence  from the Smithsonian Institute gives the date at 10,000 years ago.  Whatever the exact date of the domestication of squashes, we do know that the Spanish found and documented the use of squash seeds in the cooking of Mexico, notably in the delectable pipián sauces made from toasted squash seeds:  Fray Bernardino de Sahagún, in Historia General de las Cosas de Nueva España written in the late 1520s, described in detail how the Aztecs used ground squash seeds in various casseroles.

If the earliest records of human use of edible cucurbits point to Mexico, we also know that Egyptian pharaohs also served cucurbits as a part of their meals and that they were eaten simultaneously in Thailand and Peru as early as 7000 B.C., making early squash the stuff of legend.  From the archives of botany at UCLA, we find some tantalizing controversy:  "The greatest controversy among gourd lore concerns the bottle gourd or calabash, which is also called the Pre-Columbian gourd.  This is one of the plants that was used for containers in both the Old and New World before Columbus discovered America.  Some authors have used the bottle gourd as evidence that there was pre-Columbian cultural exchange.  However, experiments have shown that dried, sealed bottle gourds cam float for as long as two years in seawater without killing the seeds; it is likely that bottle gourds floated between the continents and were picked up in the New World and adopted for uses there...  One fruit making a successful trans-Atlantic voyage to the coast of Brazil from Africa would have been sufficient to establish the plant in the New World."  I say that wherever they originated, we are just glad that they took hold in the Americas--and so were the first American pilgrims!

Butternut Squash
Like its cousins the pumpkin and cucumber, butternut squash belongs to the Cucurbita moschata species specifically, although butternut squash is a newcomer, making its appearance as late as 1944.
The history of butternut squash is nicely laid out in a brief article on eHow food, which says that although its squash cousins were originally grown for the seeds because they were believed to increase fertility, they were also buried along with the dead to provide them with nourishment on their final journey.  Fertility vs sustenance, whatever the reason, squashes played an important role in the pre-Hispanic diet and are still important in the Mesoamerican diet today.

Long recognized as an important source of carotenoids, recent research also reveals that winter squash can be a great source of antioxidants.  The seeds, high in linoleic and oleic acids, also make a healthy snack food.

As a starchy vegetable (about 90% of its total calories com from carbohydrates), winter squash contains polysaccharides in the cell walls which contribute to its antioxidant, anti-inflammatory, and anti-diabetic and insulin-regulating properties.  See WHFoods for more information. 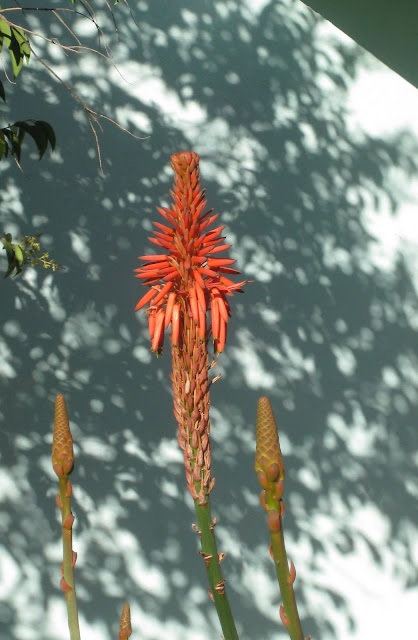 Aloe Vera blooms in my garden

Recipes are meant to be shared, but please get permission before using text or images.  Thanks!
Posted by Victoria Challancin at 7:13 AM