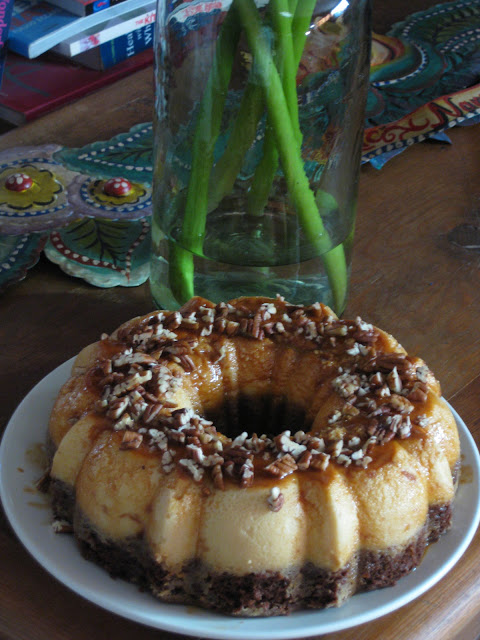 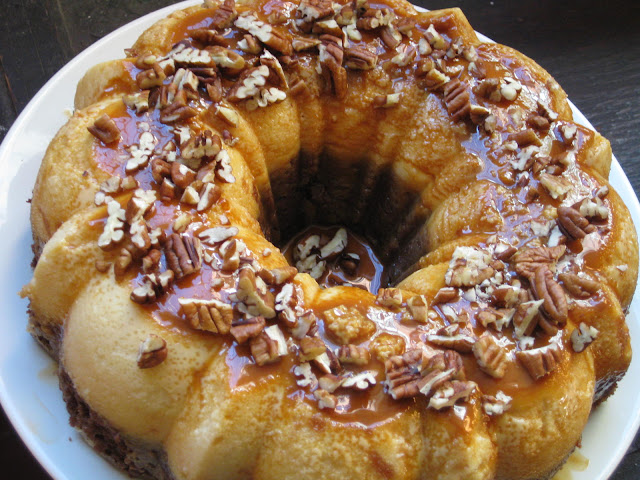 Chocoflan
by Victoria Challancin
Flavors of the Sun International Cooking School
San Miguel de Allende,
Mexico
Serendipity.  Great word.  Great concept.  Here is my latest experience with it.
Because I have so many Mexican cookbooks, I rarely buy them anymore.  Recently, however, I perused a lovely new Mexican cookbook called Fresh Mexico:  100 Simple Recipes for True Mexican Flavor by Marcela Valladolid and felt inspired by the brightness and freshness of the recipes.  Feeling a renewal of inspiration, I bought it.  Three days later I received a call from the oh-so-amazing HIP Entertainment Group (they had filmed me some years before for Castaways San Miguel for Fine Living Chanel),  asking me to be Culinary Producer for the filming of Marcela's Second Season of Mexican Made Easy for Food Network.  What a wonderful surprise!  I wasn't able to accept the role of Culinary Producer, however, because I was leading a group of seven women to Morocco during the time scheduled for the shoot.  I was able to go to LA and work as a pre-production consultant though, and that was a delight.  Marcela and everyone at HIP Entertainment were fabulous to work with and the entire experience was rewarding at countless levels.
Just a week before I had ever heard of this talented chef, I had used one of her recipes in my cooking class quite by accident.  Serendipity?.  When I first discovered this recipe on the Food Network website, I knew my Mexican students would love it.  While I usually focus on international cuisine, I knew I had to try this recipe with them.  So many times my students have asked me to make what is often called pastel imposible, a layered cake/flan concoction.  Usually, it is made of boxed cake mixes and other ingredients that I simply don't use.  When I found this recipe...well, what can I say?  It was a hit.  Justifiably so.  Check out more of Marcela's recipes on the Food Network--they are simple, fresh, easy, and interesting!
The original recipe can be found here.

Makes 10 servings
12-cup capacity Bundt pan
Softened butter, to coat pan
1/4 cup cajeta or caramel sauce
For the cake:
10 tablespoons butter, room temperature
1 cup sugar
1 egg, room temperature
1 3/4 cups all-purpose flour
3/4 teaspoon baking powder
3/4 teaspoon baking soda
1/3 cup cocoa powder
1 1/4 cups buttermilk
For the flan:
1 (12-ounce) can evaporated milk
1 (14-ounce) can sweetened condensed milk
4 ounces cream cheese, room temperature
3 eggs
1 tablespoon vanilla extract
For garnish:
1 /4 cup cajeta or caramel sauce
1/4 cup chopped pecans
Put an oven rack in the middle of the oven and preheat to 350 degrees F.
Coat a Bundt pan with a little butter, then coat the bottom with 1/4 cup cajeta and put it in a large roasting pan. (The roasting pan will serve as a water bath during baking.)
For the cake: Add the butter and sugar to a bowl and using an electric hand mixer or stand mixer, beat until light and fluffy, then beat in the egg. Sift together the flour, baking powder, baking soda and cocoa in a medium bowl. Beat 1/3 of the flour mixture, and 1/2 of the buttermilk into the egg mixture. Repeat, ending with the flour mixture. Blend until well incorporated.
For the flan: In a blender, combine the evaporated milk, condensed milk, cream cheese, eggs and vanilla. Blend on high for 30 seconds.
Scoop the cake batter into the prepared Bundt pan and spreading evenly. Slowly pour the flan mixture over the cake batter. Cover with foil and add about 1-inch of hot water to the roasting pan.
Carefully slide the pan into the oven, and bake 1 hour, until the surface of the cake is firm to the touch, or an inserted toothpick comes out clean. When cake is done, remove from the water bath and cool completely to room temperature, about 1 hour.
Invert a large, rimmed serving platter over the Bundt pan, grasp tightly together, jiggle a little and flip over. Remove the pan and scrape any remaining cajeta from the pan onto the cake, garnish with chopped pecans and serve!
Cook's Notes: The batters may appear to mix when you pour them into the pan, but they completely separate while baking, with the flan ending up on the bottom when it's inverted. I like eating it warm, but traditionally, it is chilled 24 hours before serving. 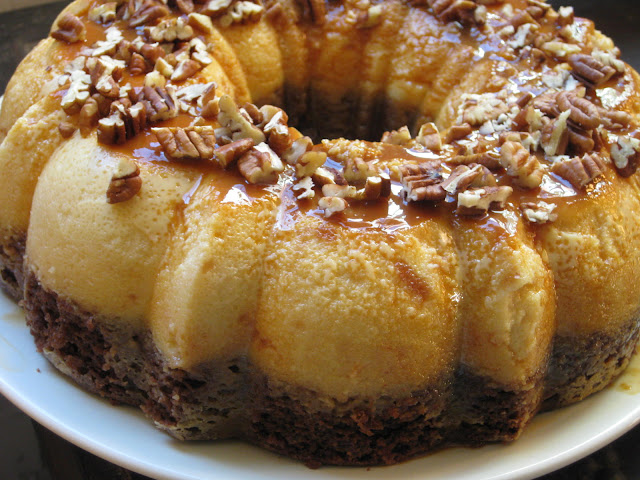 I have made this cake for several years and every time I serve it my guest have to stand and watch me get it out of the pan. However, since I barely can tolerate chocolate I use an Italian creme cake batter or a purchased spice cake mix. Both are delicious! For Thanksgiving I glaze the top with caramelized nuts and crunched up heath bars everyone in my family loves chocolate but me. Marie

I've chose to make this meal for quite some time every occasion We serve it my guests must stand and watch me understand it out of the pot. However, since I hardly can easily accept chocolate I use a good German creme wedding cake player or perhaps a bought spruce wedding cake combine. Both of them are delightful!

Something sweet and delicious! I love the idea of this chocoflan. YUM!

Do you not make the caramelized sugar for the bottom of the pan? Does it work with the burnt sugar?

if you got there early enough. The good news is that your dream has come true. Mini donut machines can now give you fresh donuts whenever you wanthttps://cuoreiberico.it/