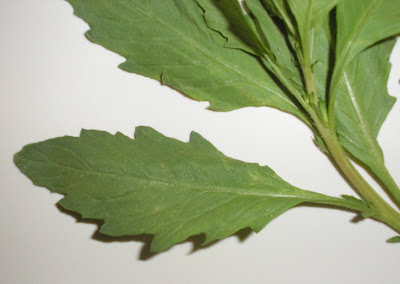 EpazoteorWhy would I ever want to cook with that?


“Huele rico,” my assistant sighed as she inhaled the aroma of the fresh epazote she was dropping into a bubbling pot of sopa Azteca. As I joined her in a whiff, I smiled, understanding that I have lived in Mexico so long that I, too, relish the strange smell of this unique and mysterious herb, which draws you to it as the same time it repels you.
Jagged-edged, wild-looking, and reeking of a creosote-like scent, epazote (Teloxys or Chenopodium ambrosioides Linneo) is one of the most distinctive herbs used in the Mexican kitchen today. This botanical annual or short-lived perennial plant grows to a height of about three feet and flourishes in poor soil. Each foot-long sprig is topped with seven two- to three-inch pointed, serrated leaves that give off a startling aroma which could likely cause any cook to ask, “Why would I ever want to use that?” Why indeed? When used sparingly, epazote imparts a mellow, earthy dimension to many Mexican dishes, giving them a unique flavor that even the novice gourmand recognizes as “authentic” Mexican.

Epazote’s volatile oils exude a scent reminiscent of turpentine or kerosene—an aggressive assault on the senses which explains its common English names of “skunkweed,” “pigweed,” and “stinkweed.” Whether dressed up in softer terms like the bland “Mexican tea” or the medicinal moniker “wormseed,” epazote is deserving of its harsher handles. The word itself comes from the Aztec language, Nahuatl in which the words epatl and tzotl refer to an animal with a rank odor somewhat like a skunk. And stinky it is! But once you acquire a taste for it, you can’t live without it.

Considered a weed in many parts of the world, epazote finds a welcome home in both the medicinal and culinary pantries of Mexico and Central America. While modern botanists list no fewer than 17 medicinal properties attributed to this lowly herb/weed, the indigenous peoples of ancient Mexico understood its many uses without the benefits of such illustrious terms as anthelmintic, anti-microbial, diaphoretic, analgesic, pectoral, and vulnerary, to name but a few. The Aztecs knew that it expels intestinal worms, promotes sweating and cell regeneration, relieves pain and constipation, and eases ailments of the chest and lungs even as they denigrated it with its harsh but apt Nahuatl name. In 18th-century Mexico a decoction of dried epazote leaves was used to treat such diverse conditions as rheumatism, typhus, fainting, and burns. Even today epazote tea is given to ease the pain of childbirth, to facilitate menstrual flow, to expel intestinal worms, to comfort a fright, and to soothe the pain of gastritis. Poultices of fresh leaves are also used to treat burns, athlete’s foot, and insect bites. However, because the fruit of the plant and the oil distilled from it are toxic, home use by the novice is discouraged, particularly for pregnant women, young children, and anyone with kidney problems.

Epazote is a common roadside weed throughout the United States, albeit a milder version of its pungent southern cousin. Although it is relatively unknown in non-Latino kitchens today, early American colonists used it in molasses cakes to battle intestinal worms. So vast were the 19th-century plantings of wormseed crops in Maryland, that the essential oil for which it was cultivated was called “Baltimore oil.” Just as they did then, today’s herbalists and gardeners favor it for its insect- and worm-repelling properties. Perhaps it is this very assertiveness that kept it in the medicine chest and precluded its full adoption into the broader culinary world north of the border.

Judicious use in the kitchen reveals the brighter side of this much-maligned herb. In central and southern Mexico no pot of beans would be complete without a few sprigs of epazote to impart a subtle flavor plus the beneficial gas-reducing properties many people believe it to possess. Although botanists fail to list it as a carminative, conventional wisdom holds it to be true. Regardless of its ability to lessen flatulence, epazote does have an affinity for beans as well as eggs, mushrooms, dairy products, tomato sauces, strong soups, and corn. That strange medicinal, kerosene-like aroma mellows when added toward the end of the cooking into a soft, yet curious, lemony aftertaste that definitely speaks of an authenticity we would miss if it were omitted.

Although epazote is sold in both fresh and dried forms, it is extremely easy to grow from seeds. If using it in cooking, don’t shy away from wilted leaves as they retain their pungency even if they look a bit tired. Don’t be afraid to experiment with this delightful, yet powerful, herb. Use it sparingly at first. Add a few sprigs to any type of
cooked dried beans, sprinkle a tablespoon of the chopped fresh leaves over scrambled eggs, infuse a little mystery into a bland cream sauce by the addition of a sprig or two, and lay a dramatic leaf over the cheese of a quesadilla before the melting begins. The following recipes illustrate classic uses of epazote. 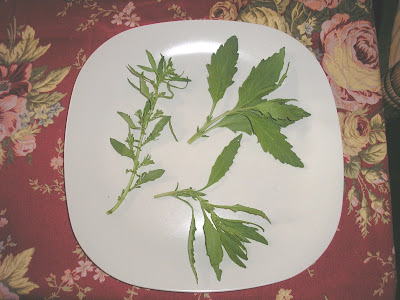 I'm submitting this article to Weekend Herb Blogging, which was established by Kalyn's Kitchen. This week's host is Susan from The Well-Seasoned Cook.

Purée the first five ingredients in a blender. Heat oil in a medium saucepan until very hot. Pour the contents of the blender into the hot oil, being very careful to avoid the splatter. Stir and cook for about 8 minutes. Add the chicken broth and the chicken; heat thoroughly. Add salt, if necessary. Ladle into bowls and pass the tortilla strips, chipotle chiles, limes, cheese, and avocado separately. Serves 6.

Heat the oil in a heavy skillet until almost smoking. Add the epazote leaves and sauté until limp, stirring constantly for approximately 2 minutes. Add the garlic, chile strips, tomatoes, and salt; fry until soft but not brown, about 5 minutes. Reduce the heat to low and add the milk. Add the cheese and cook, stirring, until the cheese melts. Serve hot with warm corn tortillas. Serves 6.

Variation: Substitute roasted red bell pepper strips for a milder flavor and use some heavy cream for part of the milk for an unctuous texture and richness.


Heat the oil in a large skillet over medium-high heat and add the sliced chiles. Cook 1 minute, stirring, until crisp but not burned. Remove the chile pieces with a slotted spoon and drain on paper towels. In the same oil add the onion; cook, stirring until translucent and soft, about 5 minutes. Add half the garlic and cook, stirring, until the garlic begins to color slightly, about 1 minute. Add the mushrooms, salt, and remaining garlic. Cook 5-7 minutes or until mushrooms have released their liquid. Add the epazote and cook for 20 minutes or until the mushrooms are soft and thoroughly cooked. Adjust the seasoning. Toss with the fried chile rings. Serve with warm corn tortillas. Serves 4.

I've never had fresh epazote, but do have a jar of dried. I *know* I am missing a lot. The fragrance is very tame, something like oregano. Of course, I am intrigued. I love unusual aromas and flavors; they can be quite addictive.

Thanks, Vicki, for a very generous post of info and recipes for WHB!

Great post! Like Susan I've only had dried epazote, but I love to use it in beans.

This is the first time I hear about this herb. Thanks for posting about it.

THANKS, I HAVE GROWN A LOT OF EPAZOTE HERE IN CT. AND I LET IT DRY FOR WINTER SEASON, FOR FISH SOUP AND OF COURSE BEANS; YOURS RECIPES ARE EXELENTS.