Cooking at the Kasbah 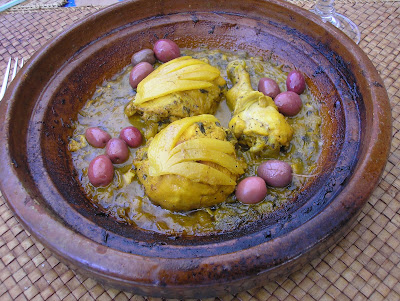 My own tagine of chicken with olives and preserved lemons 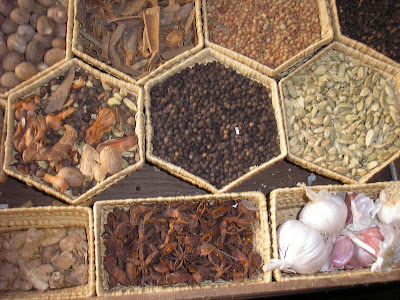 Occasionally, Life gives us a chance to pat ourselves on the head for doing things right. When I took two small groups of women to Morocco in 2007, Life afforded me just such an occasion. Although these trips were not billed culinary adventures per se, my endless pursuit of interesting food, local markets, high-end restaurant extravaganzas, and the low-end reality of street foods are never very far from my heart. They are one of the main ways I like to “have my being” when I travel. I am a cooking teacher after all, demanding, yes, but always open to new ideas and new experiences. Hence, I just had to include at least one cooking class on each trip. Having lucked out with the absolute best guide and driver imaginable, I crossed my fingers that the cooking classes I had scheduled in Marrakech were the right choice. After reading mixed reviews, I decided on La Maison Arabe. Pat, pat. That’s the sound of me patting myself on the head for choosing this particular treat. 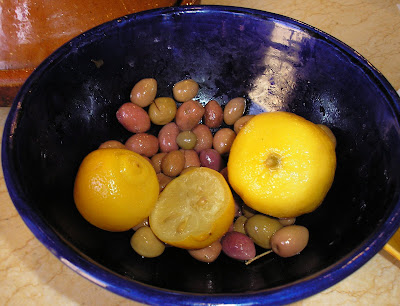 The Hotel La Maison Arabe itself is set in the Bab Doukkala District of Marrakech, close to the Bab Doukkala Mosque. It began its public life as restaurant in the 1940s. In 1998 it opened as one of the first boutique hotels in the city, brainchild of the Italian prince, Fabrizio Ruspoli, under whose guidance it was transformed into a quiet haven of sensual Eastern magic, right in the heart of Marrakech. The courtyards, parlors, and niches of the public areas are filled with carved cedar doors, Berber rugs, alabaster bowls of rose petals, gentle fountains, Moorish arches, antiques, and art. So much art. Beautiful, tasteful, alluring. But for me, my interest was elsewhere: The Kasbah, home of the hotel’s cooking school.

In addition to housing the cooking school, hotel guests can visit the Kasbah, located about 20 minutes outside of the town walls, for its swimming pool and general peace. Set in the Palmerie, a palm grove next to the King’s private tree nursery, this tranquil garden showcases the vegetables and herbs used in the cooking classes, as well as rose arbors, willow trees, flowers of all sorts, olive and fig trees, ponds with the requisite sun-bathing turtles, and birds, seemingly chosen for their ability to produce song. The whole effect is one of fragrant and peaceful ambiance, a respite behind mud walls from the busy-ness of the city itself. 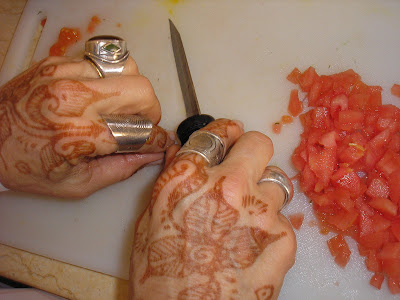 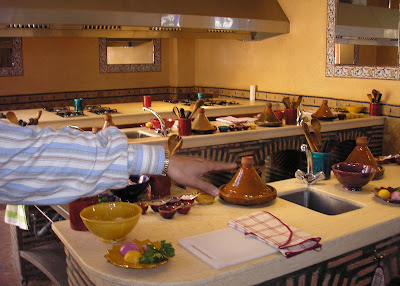 My own tagine, bubbling away

We gathered al fresco with Mohammed Nahir, an English professor from the University of Morocco, talked about the history and traditions of Moroccan cuisine and more. Although we didn’t receive actual recipes, he walked us through what we were going to prepare. The dada, a woman who traditionally acts as both nanny and cook for rich families, led us through the cooking, with Mohammed translating for her.

The kitchen itself is a proper teaching kitchen with individual burners available for each student. We prepared our dishes together and then ate them, each person with her own tagine in front of her, under the orange trees in the garden, like in the perfect secluded Arabian gardens of legend. At the end of the day, we had peeled off one more layer of the cultural mystery that is Morocco, reveling in the both fine nuances and slamming differences of cultures, the inter-weaving of history into all things, the sensuality of spices, the peace of nature, and the irreplaceable joy of being with good people, sharing delicious food, talking about life, all in incomparable setting, punctuated with the occasional sound of “pat, pat,” the tympanic sounds of self-congratulation. 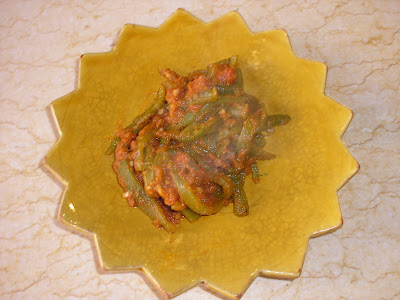 A roasted pepper and tomato salad

Contact Victoria Challancin at flavorsofthesun@gmail.com for details of the Morocco 2008 trip.

Posted by Victoria Challancin at 1:09 PM

Great blog! You transported me there.....

wow, the tagine looked amazing. you must have had such a great time there...

Hi Victoria! I just found your blog via Susan at The Well Seasoned Cook.

I am very excited. I just received an Emile Henry Tagine for my birthday. I haven't cooked with it yet, so I am so happy to read your post!