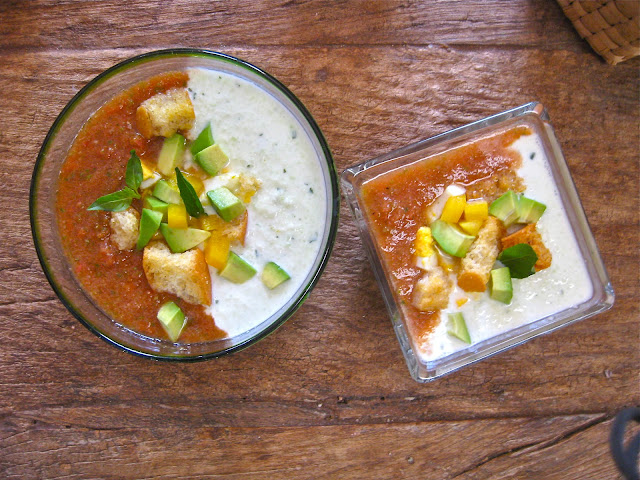 Soup really is the ultimate comfort food.  When it is cold outside or when you are feeling under the weather, what better to warm the spirits than a steaming bowl of hot soup?  And when the weather is blazing, is there anything more refreshing than a chilled bowl of puréed vegetables or fruits, to take the edge off of a truly hot day?  Just glance at my recipe index and you'll see that this is true for me.

A Bit of History
Tracing the history of soup is probably impossible since cooking meats or vegetables in water or broth has been around for about 8000 years or as long as man has cooked in waterproof vessels.  Cold soups, are obviously newer, but equally difficult to pinpoint on a culinary timeline.  We do know that many countries have had examples of cold soups that have been around for a very long time and are considered national classics:   In Scandinavia, cold fruit soups are popular; in Russia, cold borscht is perhaps even more popular than hot; the Danes love versions of buttermilk-based cold soups; the cold version of gazpacho is loved in many forms throughout Spain (though it was born in Andalucia, as is shown by the Arabic roots of the word "gazpacho"); Greeks positively shine with their chilled avgolemono soup, bright with the flavor of lemons; and let us never forget that sultry French bowl of cold potato and leek lusciousness, vichyssoise.

Looking at the etymology of the word "soup," we see that it is based on a post-classical Latin verb suppare, which means "to soak" which in turn was borrowed from a German root sup-.  From these words grew the Old French soupe, which originally referred to a either a piece of bread soaked in liquid or a broth pored onto bread.  In the 17th century, the word entered English where it referred to a broth or pottage.   It wasn't until the 18th century that the idea of soup as a first course to be served with the meat or vegetable dish really came into being.  Today we accept that soup can be a first course entry to a meal or a meal in itself.  Sweet, savory, hot, cold, thick, thin, however we choose to enjoy it, soup is an indispensable part of our culinary world.

As all recipe ideas grow and change, so do recipes for soup. Specifically, cold soups can be sweet or savory and can be used as a starter or a dessert.

Gazpacho, traditionally served cold, is basically a tomato-based, raw vegetable soup, rather like a liquid salad.  White gazpacho, on the other hand, usually contains grapes, garlic, and almonds.  Rather than calling the white soup part of this recipe a "gazpacho" (as many recipes do) I prefer to label it "tzatziki," because to me, that's what it most resembles.

Although there are numerous regional versions of gazpacho in Spain, most food historians agree that it has been around in the Iberian Peninsula since at least Roman times.  Based on tomatoes, bread, water, vinegar, oil, and salt, gazpacho was sustenance to the peasants, particularly shepherds, in the south of Spain.  Variations abound. 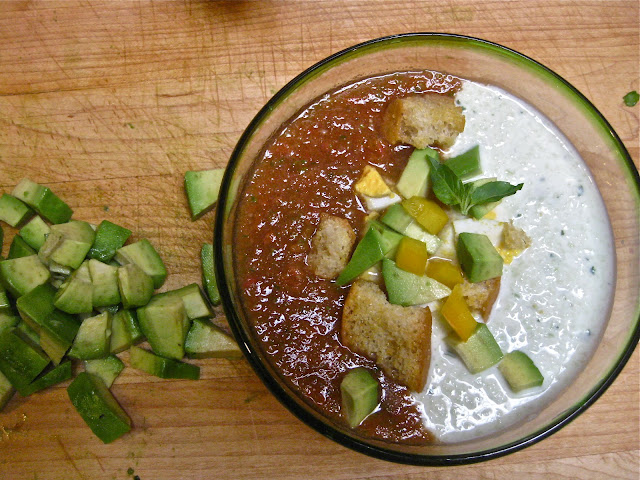 Pouring a two-tone soup a really easy technique, is such fun to teach because it is always impressive to see two contrasting colors, two contrasting but complimentary tastes side-by-side in the same bowl.  It's just fun to make, fun to serve.  I tweaked a couple of recipes I found online (sources below) to make these soups.  I chose yellow bell pepper, avocado, and croutons, and basil for garnishes, but there are many possibilities.  Delicious after only 2 hours of chilling, they were even better the next day.

Place cucumbers in a blender or food processort with yogurt, lemon juice, garlic, and 2 tablespoons of the chosen herb.  Process until coarsely puréed.  Pour int a large bowl.  If too thick, add a bit of ice water.  Cover and refrigerate for at least 2 hours.  Save the chopped onion and remaining herbs for garnish.

In batches, place the vegetables into a food processor with a small amount of the liquid and process until minced and combined.  As you complete each batch, put int a large bowl or container.  Once all of the ingredients have been processed, add the remaining liquid to the bowl.  Taste and adjust the seasonings if necessary.

Chill at least two hours or overnight.  Serve alone or alongside the tzatziki soup.

To make the two-tone soup:
Fill two jugs or 2-cup measuring cups with spouts with the soups, white in one, red in the other.  Simultaneously pour the soups into soup bowls, adjusting the flow of the soups as you go.  Garnish as desired and serve well-chilled.


I will be submitting this post to the blog event Souper Sunday, created by Deb of Kahakai Kitchen.  Stop by for her roundup on Sunday! 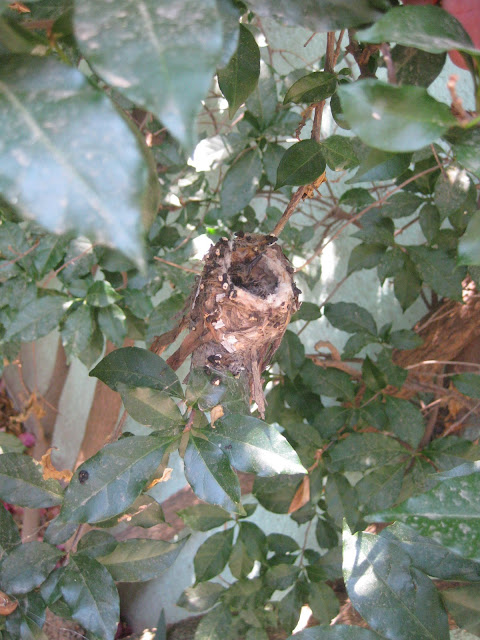 I've been following the development of this baby hummingbird from when it was just a tiny, tiny egg.  The photo isn't great as I didn't want to move the branches to get closer for fear I would disturb it.  Yesterday, it had gone.  Such a precious thing to witness.

Recipes, like life, are to be shared, but please ask permission before using photos or text.  Thanks!
Posted by Victoria Challancin at 3:06 PM

Love this post! Am making my first soup of the winter season today! Have never tried gazpacho but it looks delicious and I am going to have to save the recipe to try in a few months time when it gets warmer down here! Thanks for sharing :)

I love your presentation of these soups. Yes, the two-tone look is very appealing. I think these two soups would work so well together - the heat from the gazpacho mixed with the coolness of the yoghurt and cucumbers in the tziziki. Great recipes Victoria. But...it is cold and rainy here, not really the weather for cold soup. I'll have to store this away for later! Enjoy the heat xx

what a soup! really cool history too, so fun to find your blog!

Thank you a. maren. Glad you like the blog. And as for Ali and Charlie...I always smile because we are in different hemispheres with opposite seasons, so like you, I am always saving up recipes from your blogs for when the time is right here!

What an amazing delicious looking soup!

Victoria, you never cease to amaze me: there somehow never ever seems a post from which I do not learn, which I do not want to keep! Of course I am also one of those who saves up your recipes for the next season, but am thrilled for a new gazpacho one to try - have never made tzatziki into soup, but it surely looks appetizing! Love your hummingbird photo: don't think we have them here Down Under but our raucous kookaburra hardly is fair exchange :) !

I adore your two tone soup Victoria! As someone that wants to try a bit of everything, this soup is the best of both worlds!

Beautiful presentation! These two soups go so well together and the avocado garnish looks yummy!

What a delicious way to serve soup! A perfect beauty! Good to know all the history behind Gazpacho.

It's been hot in DF, I really need a bowl of this delicious looking soup today. YUM!

I love reading your posts, they are so informative and beautifully written and photographed
Cold soup is still a concept I am trying to wrap my head around but your soups look like the perfect summer meal

I love duo soup presentation -- and a very nice combination of flavors.

I love the duo color and flavor combinations. Unfortunately it has been chilly here so I will have to go with a warm soup. Loved the hummingbird shot:)

I love the idea of both soups on their own, but combined is a wonderful idea. I love how pretty they look garnished in the bowl.

Thanks for sharing with Souper Sundays this week! ;-)

I enjoy so much visiting you...it's like taking a cooking course. Funny when I was thinking of doing a cold soup for my last post I thought of a duo...excellent on your part....