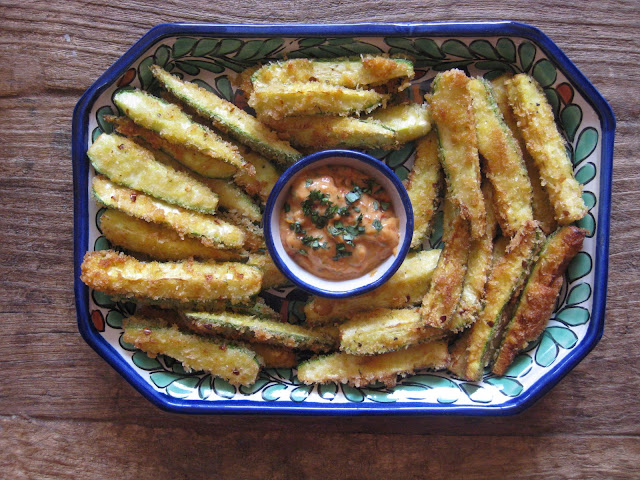 As I've mentioned before, my mother, who was from Georgia, fried everything in that way of Southern cooks.  Normally, she cooked as if she were preparing food for an army, and often it seemed that she was.  In those older, more tranquil times in the rural South Florida of my youth, people used to "drop by" unannounced.  Conveniently, it happily seemed to me, that time for dropping by often coincided with mealtimes.  And at my parents' table, you often found platters of fried food:  chicken, rabbit, quail, dove, venison, fish, turtle, aligator tail, frog legs, okra, oh...and so much more.  Yep, my mother fried a lot of food. And it was all delicious.

On the other hand, I never fry.  Well, almost never.  And even though I don't cook or eat the food of my childhood often, it is still comfort food to me.  I think I would swim to Florida if I could once again taste my Mom's fried backstrap of rabbit, mashed potatoes with both pickled peaches and cream gravy, greens of any sort with hot pepper vinegar, pan-fried fresh sweet corn with bacon, and a big bowl of black-eyed peas with hamhocks.  Alas, though, not in my kitchen.

For a while it has been on my mind to prepare some panko-crusted eggplant or zucchini spears as a vegetarian option for a light lunch.  Of course, I had planned to bake them for health reasons.  As it turns out, the oven was occupied and I fried them instead.  Days later, because they were so good, I decided to bake them to see if I could tell the difference.  Here are the results of that experiment.

Both were satisfyingly tasty.  Which was actually better?  Why, the fried ones, of course.  The flavor was just a bit richer.  Which will I make again?  The baked ones--just because they are both easier to prepare, less messy, and so much healthier.  Not a great sacrifice to choose the baked version...

Which sound better to you?  The fried or baked version? 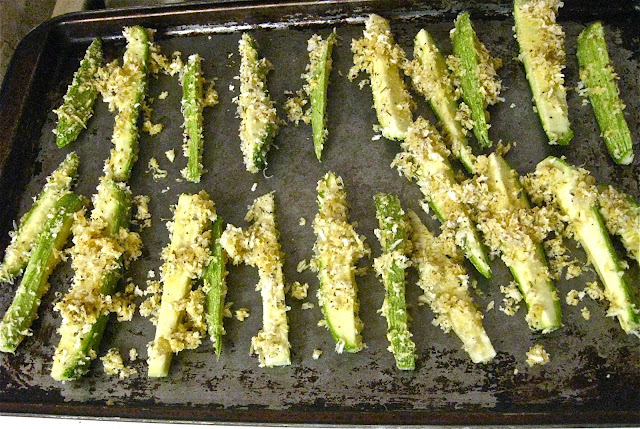 Zucchini "fries," ready to be baked

Cook's Notes:  I rarely use dried herbs, but this is a case where they work just fine.  I used a blend of dried Italian herbs, but others, such as Herbes de Provence, would work as well.  Although I chose panko just because I like the light, crunchy effect it gives, any breadcrumbs (fresh, dried, wholewheat...) could be used.  If you choose to fry the zucchini sticks, simply use a sauté pan with about an inch of mild vegetable oil such as canola.  The zucchini are easy to cut by slicing vertically into four long slices, make stacks,  and then cut into French fry-sized batons.  This works equally well with eggplant, though you might want to use a salting technique first to remove any bitter juices (be sure to rinse).

Lightly oil a cooking sheet with Pam or olive oil.  Mix together the panko, cheese, chile flakes, dried herbs, salt and pepper on a plate.  In a small to medium bowl, beat the two large eggs with a fork until frothy.

Dip the zucchini pieces one at a time into the beaten eggs.  Roll the zucchini pieces in the breadcrumb mixture, being careful to uniformly coat the pieces.  Place the zucchini on the baking sheet and bake for 10 minutes.  Flip the fries with a spatula and cook for an additional 10 minutes, or until golden and crisp.  Serve with the aioli.

A Note on Aïoli


My first exposure to aïoli was, in fact, in the south of France.  After that first taste over 40 years ago, I have experienced various Spanish versions, more French versions, and the non-egg garlic sauces like skordalia (both the potato and bread versions) and the Middle Eastern toum.  My love of garlicky sauces knows no bounds.

Aïoli is a traditional sauce from Provence (some will say Catalonia) made of garlic, olive oil, and egg.  Served at room temperature as an accompaniment to raw or boiled vegetables, boiled fish, and cooked eggs, it is utterly simple to make and it imparts a breath-zapping zing of rich raw garlic.  Other parts of the European Mediterranean serve it with seafood (particularly salt cod) and fish soups.  Some versions contain saffron, tomato, pears (Catalan), fresh herbs, capers, mustard, or chile pepper, but the traditional version is just garlic and maybe a hint of mustard.


What is aïoli--a simple definition of a traditional sauce seems lacking?  It is simply a rich, thick sauce made of crushed garlic, egg yolks, lemon juice, and olive oil.  The slow addition of the olive oil to the other pounded ingredients yields an emulsified sauce. a garlic-enhanced mayonnaise, if you will.  When I refer to aïoli in this article, I am talking about the Provençal version which uses eggs.


Thinking of fried food and garlic make me remember my mother, who always had garlic on hand:  it came 2 small heads to a tiny box that lasted her until it dried out and she needed more.  I, on the other hand, buy it by the pound.  And I never have to throw any dried bits out--it gets used too quickly!  My love of garlic came to me early on, and as I have travelled, my use of it has grown and grown.  That early exposure the garlicky aïoli of southern France was just a natural "fit" with my palate. 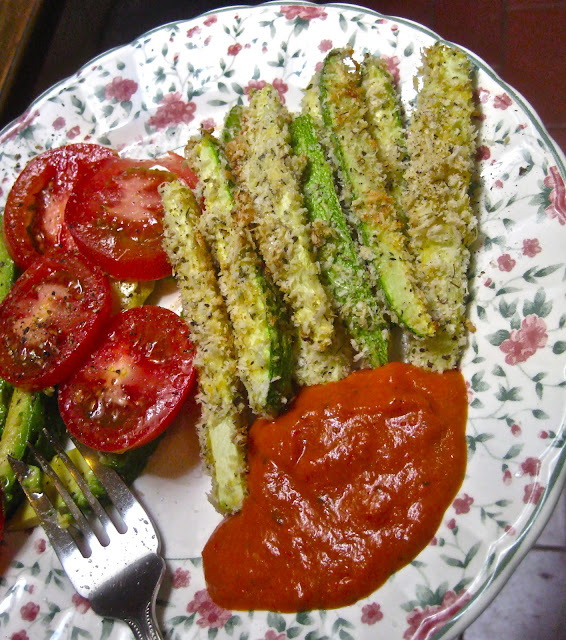 A light vegetarian lunch with the baked version served with a purchased marinara sauce (gasp!)

Cook's Notes:  Because of the issue of using raw eggs here in Mexico, I just don't make my own mayonnaise any more, which is a shame as it is always, always so much better than the purchased kind.  In this recipe I simply use Helmann's Light. 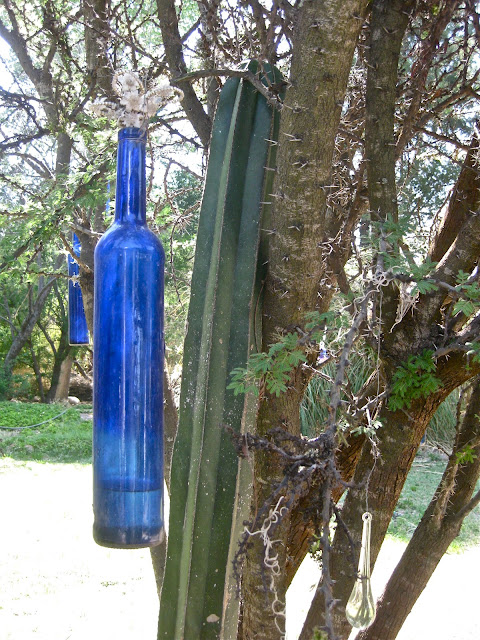 The Blue Bottle Tree from our friends' ranch

Like life, recipes are meant to be shared, but please ask permission before using photos or text.  Thanks.

Posted by Victoria Challancin at 3:26 PM

I too love to eat fried food but hate frying and rarely fry. Having an Indian background, we have so many fried delights that are soul food for me...like samosas, parathas, pakoras, bondas and on! I love fried zucchini but could eat the baked version too. They both look delicious to me and your childhood dinner table; my husband would be right at home as he too is a Southern boy hailing from Charleston. You dinnertime guests sound suspiciously like my family!

It sounds like we have a lot in common. Fried or baked, maybe the best part of these is to share them. For me, that's what it is all about. That's why I loved growing up as I did, surrounded by loving family and friends, enjoying life and food together!

I am so making this tomorrow or the day after tomorrow. I have zucchinis that I need to use and this recipe came in just right on time!

So, baked or fried... wow it's hard to choose. I don't mind deep frying at all, but maybe if baked one is good enough then it's healthier and easier, so I'll try on baked one first. Can't wait. =)

Well, we all seem to love zucchini - I know I do! Being a little more than the usual 'health freak', the first option, of course, is baked! I suppose I do a 'copout' at times! Making a lot of stirfries, are the latter 'fried'? So little oil is used for such short time with so many other healthy ingredients?! As I said: a copout! BUT, are fried vegetables on the menu not better than fried whatever-else? Am making these during the weekend [shan't tell you which way!]!

It sounds like your mother was not only a great cook but a very hospitable one too. A lot of the food she cooked I have never tried like dove and aligator and turtle! What great variety. Amazing though that 'fried' was the norm. How are their arteries? I love fried food but it's not very Australian so people only fry things on the rarest of occasions. So when fried food is offered, I just love it and indulge in it because every now and then is perfectly okay! I love the look of your zucchini sticks. I have never had zucchini cooked like that before. I think I prefer the look of the fried - they have more colour xx

I hardly fry too and my mother (although not Southern) loves frying everything! :P These look fabulous Victoria-and when baked, healthy too!

Charlie, you asked about the arteries of my parents. Probably not good, but they did live to 85 and 89. As for me, I hope I have rectified the situation since I didn't continue the frying of foods when on my own! But ah...the memories.

Well, I'm going to have to make this. This is the second time in two days that I have seen zucchini sticks but this version has me sold.

Well, its probably lucky that we move on to make our own food traditions. I dont fry often, but there is always temptation to and I love the idea of these crusted zucchini yum

Fried for me please! I know I should be eating the baked ones, but the extra calories are worth it, right?

The food of your childhood sounds incredibly exotic. I think we would have been incredulous if someone had offered us alligator as children.
Courgettes and aubergines soak up oil in copious quantities so for any grilling I use a hot oven or the grill (you might say broiling). It saves time over a hot stove too. Love the idea of the herb encrusted crunchy courgette sticks. I'm on a mission to get my vegetarian daughter to like them so this might be the one! Hopefully!

You just brought back memories of my Mami. She fried a lot also. A simple cook but when she touched something it turned out truly delicious. I also try not to fry, but there are things that have to be and are rarely cooked at home...I wait for company to have an excuse....

Those memories are just the best. My other was a fabulous cook, in spite of all the frying (or because of it?). Like yours, everything she cooked was simply perfect. I may never fry like that, or hardly at all, but I do have those memories...perhaps in my cells.