Really, what is hummus? 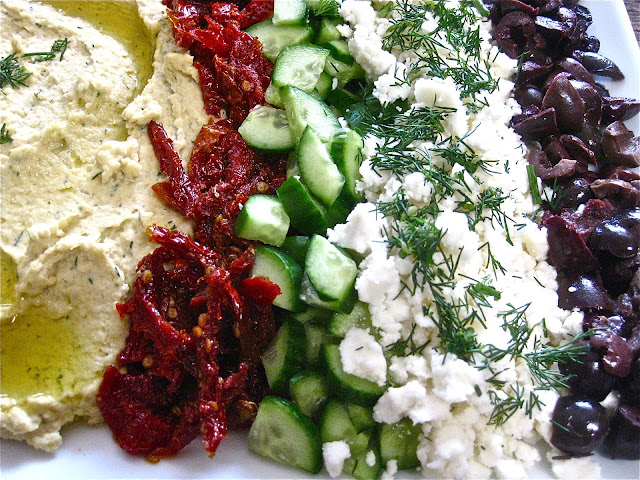 
Really, what is hummus?
by Victoria Challancin

The English teacher part of me will always be drawn to etymology.  And nowhere is it more true than in the food world.  I am fascinated by the way the meanings of words morph with time, culture, travel, use, and exposure.  Take the word hummus (spellings vary greatly), for example.  Once the Western culinary world embraced the dish most of us know as "hummus," there the fun begins.

The word hummus simply means chickpea in Arabic.  That's all.  Chickpea.  Yet I can easily find countless recipes for Green Pea Hummus, Beet Hummus, Fava Bean Hummus, Black Bean Hummus, Carrot Hummus, Pumpkin Hummus, Artichoke Hummus and more with not a trace of chickpeas in them.  Often these are just garlicky, lemony spreads--delicious, no doubt, but clearly not hummus.  How has this come about?

The West embraced hummus, that is how.  Logically, experimentation and reinvention teamed up with savvy marketing, and a new food industry was born.

Hummus may be the Arabic word for chickpeas or garbanzos, in Spanish, but it also denotes a dip of creamy, garlic-rich, lemon-spiked mashed chickpeas now found throughout the world.  When it includes tahini, or sesame seed paste, it becomes Hummus bi Tahina, the dish many of us have come to love and crave.  The modern Western marketing machine has plummeted hummus with tahini into our world, on our shelves, and, dare I say, into our hearts.  Countless varieties appear on our grocery shelves:  Red Pepper Hummus, Roasted Garlic Hummus, Hummus with Garlic, Hummus with Feta, Hazlenut Hummus, Sun-Dried Tomato Hummus, Hummus with Yogurt, Hummus with Pine Nuts, Tofu Hummus, Spinach Hummus, Kalamata Olive Hummus, Cranberry Hummus, and on, and on.  And most of these actually include chickpeas, the "real" hummus.

There is such a thing as The Great Hummus Wars, in which both Lebanon and Israel argue over the "ownership" of the name hummus.  The real history of hummus, of course, is lost in time as chickpeas have been cultivated in the Middle East for over 7000 years.  Although they were eaten in many forms, such as stews and other hot dishes for millennia, the earliest know recipes form the cold version with tahini which is similar to what we know today, didn't appear until the 13th century in Egypt.

Whatever the origin of hummus be tahina, we do know that it is beloved by Arabs, Christians, and Jews throughout the Middle East and beyond.  As a part of a meze, it is often served as an appetizer and dip, served with flatbread.  It is also a common accompaniment to falafel, kibbe, grilled chicken, fish, or eggplant.  Seasonings and garnishes can vary the flavor of the basic chickpea-lemon-garlic-tahini mixture:  chopped tomato, cumin, mint, cilantro, parsley, caramelized onions, hard-cooked eggs, sumac, olives, pickles, pinenuts, and a splash of olive olive oil are commonly found.  No wonder it has been called a true culinary chameleon.

A perfect food for the hot, arid climates of the Middle East, hummus can fill nutritional needs as it provides a flavor-packed dish of almost addictive goodness.  Containing high amounts of fiber and proteins, it is also rich in minerals and vitamins. 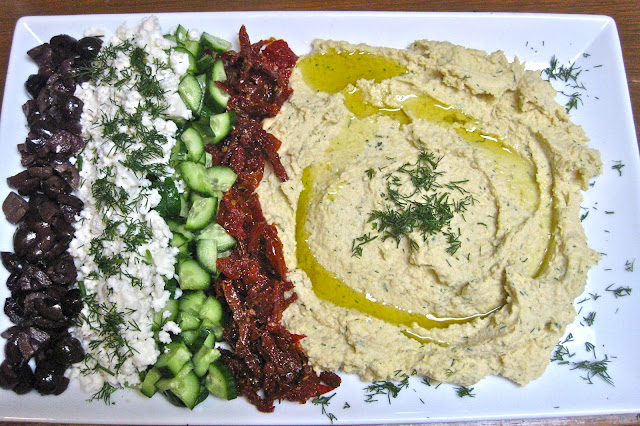 A platter of Greek-Style Hummus ready for dipping

Hummus was not new to me when I first moved to Abu Dhabi in the mid-seventies, but it was there that I truly came to love it.  Later, when I taught at university in Bahrain, I ate it, along with baba ghanouj and fattoush or a chickpea salad, almost daily in the university's cafeteria.  It became something I craved--and still do.  Usually, I just make a Lebanese-style hummus with no added embellishments.  Chickpeas, lemon juice, lots of garlic, and tahini pureed together and drizzled with olive oil and perhaps a sprinkle of cumin.  That's it.  Simple.  But when I saw this Greek-style version on thedailymeal.com, I just knew I had to make it. And I thought laying it out Cobb Salad-style, would be nice.  And it is.  We made it in class this week with Za'atar-Spiced Homemade Pita Bread.

Combine chickpeas, tahini, lemon juice, garlic, olive oil, and 2 tablespoons dill in a blender or food processor and blend until smooth.  If too dry, add hot water or the cooking liquid from freshly cooked dried chickpeas by the tablespoon until it reaches the desired consistency.  Taste and adjust seasoning.  Spread the hummus on half of a serving platter; swirl the top with a spoon to make a circular indentation and drizzle more olive oil into the indentation, if desired.  Layer the olives, cucumber, tomatoes, and feta in rows alongside the hummus.  Sprinkle with the remaining tablespoon of fresh dill.  Serve with pita bread or pita chips. 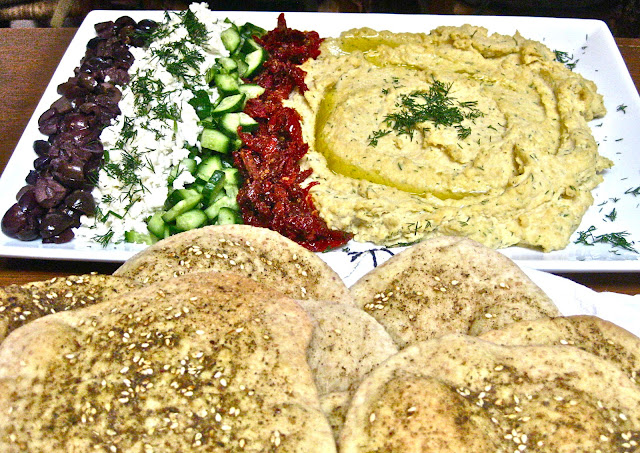 Greek-Style Hummus with Dill and Homemade Pita Bread with Za'atar

Not only is hummus delicious as the dip we have come to know and love, it has countless other uses as well: 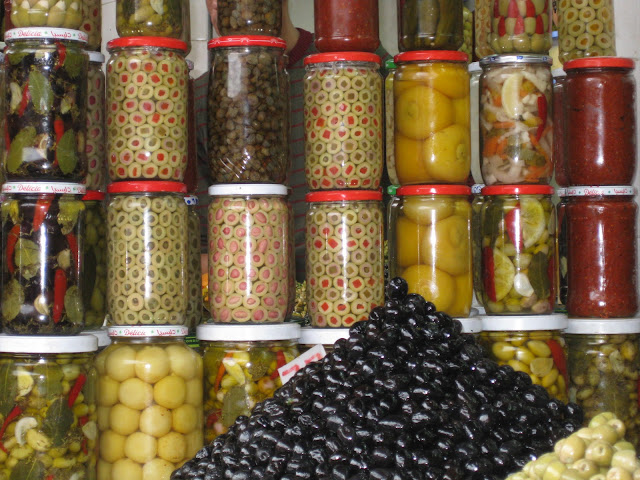 Olives on display in the Marrakech souk

This is my entry in Nancy of Spice Foodie's monthly YBR (Your Best Recipe) event.  Thank you for hosting, Nancy.

©Victoria Challancin.  All Rights Reserved.  Please share the recipe, but ask permission before using photos or text.  Thanks!

Posted by Victoria Challancin at 2:18 PM

I DO love hummus! Thanks for another informative post about this delicious... hmmm chickpea? Hehe, whatever the name means and wherever it comes from, I'm glad it made it even to Mexico.

What a beautiful looking platter Victoria. Stunning with all those colours. I would love to attack it as an appetiser! I love hummus and all the things you've put with it xx

Great post. So informative and beautifully illustrated. I love Mid-Eastern treats like this (and your university lunches). I would happily pull a seat up to that platter and feast away.

Oh dear,I think I started to drool. I just want to grab a spoon and start eating. Your pictures are sinful and I am now educated on the history. Thank you. I have been to Israel, Turkey and Greece myself and you are right - the different kinds of hummus are incredible. I will try your recipe. I cannot wait to get back to the flavors.

First of all, what beautiful photos! Well, I kind'of fell in love with it when I realized it was a hugely addictive alternative to all other spreads and that was a long time ago! So long I oft had to spell it three ways on the phone for a grocery delivery!!! I do try to make my own but sometimes buy it under at least three spellings and my fridge would loudly complain if this was not part of its contents!

Fantastic photographs! Both the platter and the market! thanks for the inspiration and sharing!

This platter looks really fantastic. I never thought of adding hommus to potato or soup great ideas, thank you. You inspired me with you Chimichurri post last week . Im going to use it in my cooking demos this week thanks X

Victoria, your photos are always great but todays are outstanding. Love your presentation for hummus.

Informative post and gorgeous photos!you have made me so hungry. :-) ...Susan

What hummus is...well, I believe there's another name for it...it's DELICIOUS.

I love hummus too and thank you for this post. I will pass it on to others that have disagreed with me when i tell them that hummus is chickpeas....

I love, love your article. I'm also always curious of the history and evolution of the foods I eat. Your hummus plate looks so scrumptious. Thanks for being a part of the YBR:)