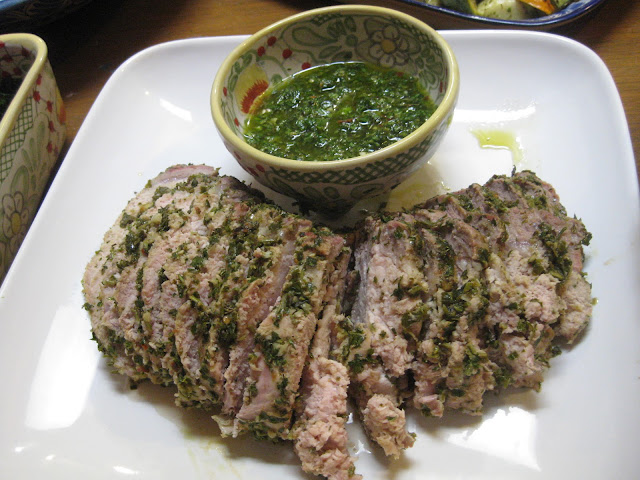 The original recipe came from Foodista.com, whose version is a charcoal-grilled pork tenderloin with chimichurri and summer veggies.  Charcoal grilling would be better, obviously, but my take on this recipe, which roasts both the vegetables and the meat in the oven, is really good if the grilling option isn't readily available to you.  The recipe calls for marinating both the veggies and the pork (or chicken, or fish, or shrimp, or beef, or tofu...) in some of the chimichurri, and roasting them at fairly high temperatures.  Simple, delicious, and with any luck, you'll have a bit of the luscious sauce leftover to use on crackers with cheese or crudites. 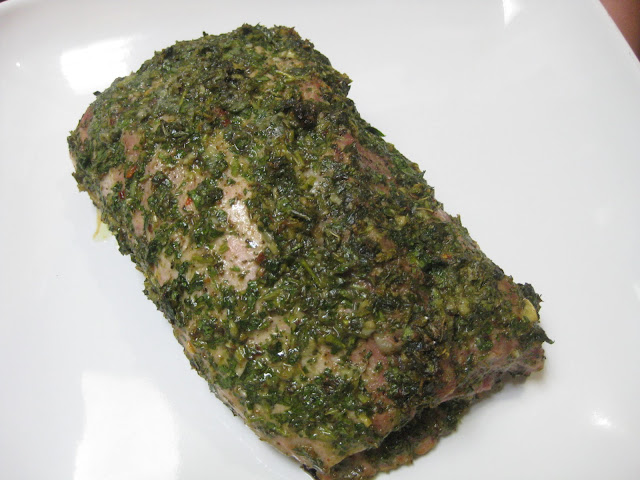 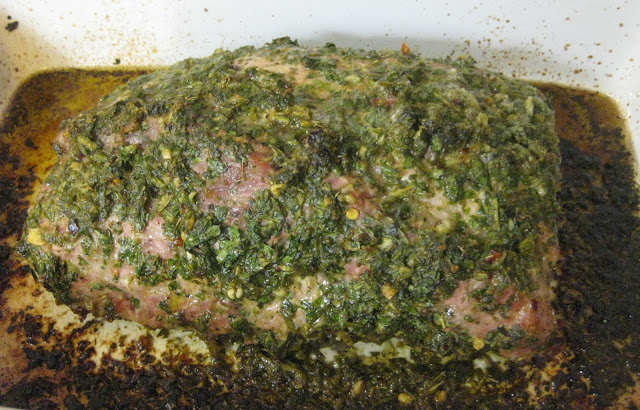 Right out of the oven, complete with the crusty bits

Recipe:  Chimichurri-Roasted Pork Loin
(Adapted from the original recipe at Foodista.com)
Cook's Notes:  I used a 2-lb boneless pork loin; you could also use pork tenderloins as in the original recipe.  This recipe and technique would also work on practically any meat or type of seafood.  In this recipe I added the oil to the food processor as I made the chimichurri.  Normally, I prefer to chop all the ingredients, put them in a bowl, and then add the olive oil so that it doesn't emulsify.  I take the meat out when an instant-read thermometer inserted in the thickest part of the meat reaches 145 degrees as the temperature will continue to rise to about 160 by the time it is ready to slice (trichinosis germs are destroyed at 137 degrees).

For the pork:
One boneless pork loin, 2 to 3 pounds

To make the chimichurri:
Place the parsley, olive oil, vinegar, oregano, cumin, salt, garlic, and chile in a food processor.  Puree 30 seconds, then scrape the sides down and puree again.

To prepare the meat:
Trim any silver skin from the meat, but leave the needed fat.  Rinse meat and pat dry with paper towels.  Rub the pork loin on all sides with about 1/4 cup of the chimichurri sauce.
Allow to marinate for at least 30 minutes.

Preheat the oven to 450 degrees F.

Place the meat in a baking dish.  Roast in oven for 15 minutes, lower heat to 350 degrees F and continue roasting for an additional 25 minutes.  Plan on about 20 minutes per pound.  When the internal temperature reaches 145 degrees F, remove from oven, tent loosely with foil, and allow to rest for 15 minutes before slicing.  Slice meat into 1/4-inch slices and serve with leftover chimichurri sauce (make sure the sauce hasn't touched the raw pork!).  Serve with the chimichurri-roasted vegetables (see recipe link below), which can be cooked at the same time. 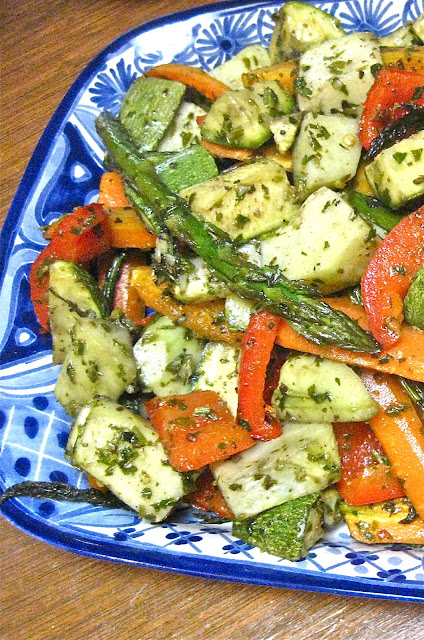 The chimichurri-roasted vegetables (recipe is here) 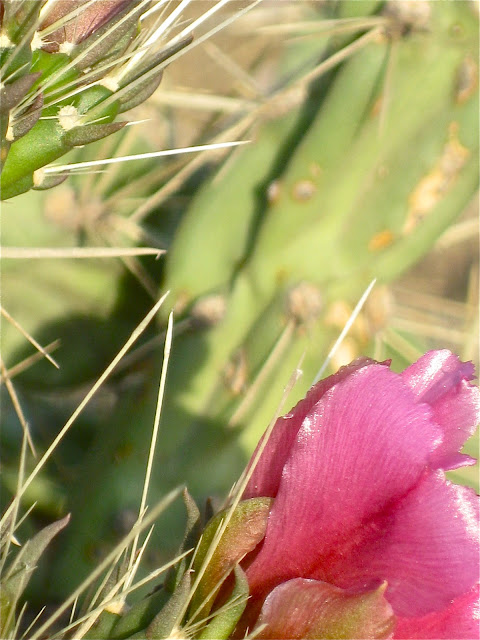 ©Victoria Challancin.  All Rights Reserved.
Recipes are meant to be shared, but please ask permission before using text or photos.  Thanks.

Posted by Victoria Challancin at 9:37 AM

How divine! I love how the pork is completely smothered in chimichurri so that it would be full of flavour in every bite! :D

I have tried and absolutely loved your green chimichurri sauce! But it looks superb on/with the pork and I can't wait to try! Am imagining the taste as I write this ;) !

I must try your chimichurri sauce! looks and sounds really yummy... Looks delicious on the pork!

I love pork and I love chimichurri sauce. What a great combination. I bet the pork was full of flavour. xx

Pork and chimichurri, a combination made in heaven :)

I love chimichurri sauce and use it all the time. The pork looks great roasted with it as does the vegetables. I started to say that I have not had the red variety but knowing how many dishes I have eaten in the many restaurants that Norman Van Aken has owned over the years, I probably have.

Wow Victoria, what a delicious combination. Thanks for sharing the recipe find. My hubby would go crazy for this.

I think I mentioned before that there is always a bottle in my fridge and I also have to make up a few more for my son in Florida.

Amazing! I wonder how did u know this kind of food? Looks very delicious! Can't wait to try it and then taste it afterwards.