Images from Day of the Dead 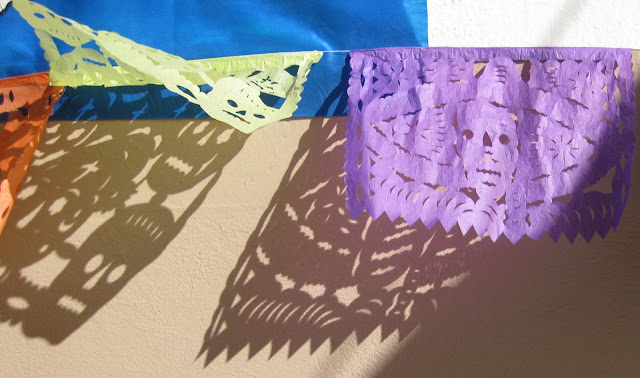 El Día de los Muertos:
The Poetry of Death
by Victoria Challancin
Mexicans celebrate life.  Mexicans celebrate death.  Mexicans celebrate--that is a joyous fact of life.  Firecrackers, parades, bands, food...families coming together, schools reinforcing traditions, life continuing in timeless ways midst the turmoil of modern change.
Reams have been written about Mexico's celebration of the Day of the Dead.  Reams.  Volumes.  Often I read that it is an example of how Mexicans laugh at death.  I don't believe that Mexicans laugh at death at all, rather they "celebrate" death as a means of staying connected and honoring those that they love, those who have passed on--albeit in a joyful and colorful way.  No dreary mourning here.  Instead, we have a vivid connection to the Cycle of Life.
Deeply rooted in the pre-Hispanic beliefs of the indigenous people of Meso-America, El Día de los Muertos or All Souls' Day (its Catholic counterpart celebrated on November 2nd) is the one day of the year when communication with the dead is possible.  This stems from a belief that on this one day, the souls of the dead could return to commune with the living.
Families begin to prepare weeks beforehand by decorating an altar to commemorate the dead.  They use a type of 20-petaled marigold, the cempazuchitl flower, known as the "flower of death," to decorate both altars and tombs in the cemetery.  Sometimes these flowers are woven together in a sort of tapestry.  Other times they are broken apart and the petals used to form a picture or pattern, or sprinkled on the ground to mark a path for the dead to follow.
One of my Mexican friends said last week that she was off to "wash" her father, who died over 15 years ago.  What she meant was that she would join her family in the cleaning of the grave--weeding, washing, sprucing up the grave in preparation for an all-night vigil and celebration with his spirit.  Graves are prepared, offerings (ofrendas) of favorite food and drink are set up, photos appear, items belonging to the deceased are brought out, candles are lit, incense is burned, and everything is made ready to reunite the spirit with its loved ones in a spiritual communion of life and death.
Halloween is something entirely different, based on the ancient Druid Samhain celebration in Celtic Europe.  Here in Mexico at midnight on Halloween, we see once again that poignant blending of the ancient beliefs with modern Catholicism.  At midnight on October 31st (which of course makes it November 1st), the spirits of the babies and children who have died, los angelitos, come to spend time with their families.  On the following day, November 2nd, the souls of the adults come into play.  Literally.  So let us never forget that this celebration is really Días de los Muertos, two days, November 1st and 2nd, All Saints' Day and All Souls'Day--two days of commemorating the dead.  Two days of celebrating the Cycle and Circle of Life.
Recently, there has been a backlash against American-style Halloween celebrations.  This year in various rural communities there were banners flying with the words "di no a Halloween," boldly displayed.  The translation, "Say no to Halloween" refers to the commercialism  and adulteration of Halloween and trick-or-treating, something that never existed in Mexico before globalization.  This can be seen as a plea to maintain meaningful traditions in time-honored ways.  Maintain and continue.


My dear friend Alison, who took many of the following photos, and I like to visit various altars each year and marvel at the way death is recognized in this culture, recognized and celebrated.  Scroll through these photos to see some examples.  There are beautiful examples, both humble and elaborate, from the country and the city, put up by the poor and by the rich, by workers, shop owners, and collectively by residents of a particular street or area.  All beautiful.  All touching.  Touching the heart with bold strokes of color and joy, sadness and pain, in a singularly Mexican dance illustrating so poignantly the Poetry of Death. 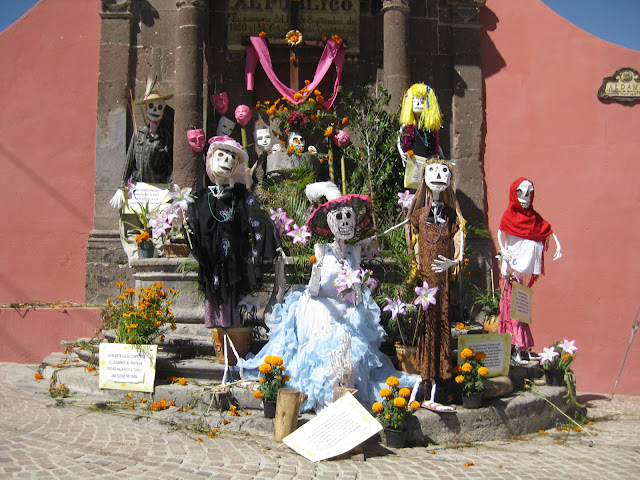 Life-sized skeletons at an ofrenda put up at a local fountain by the owner of a small nearby tienda...surely a labor of love and celebration 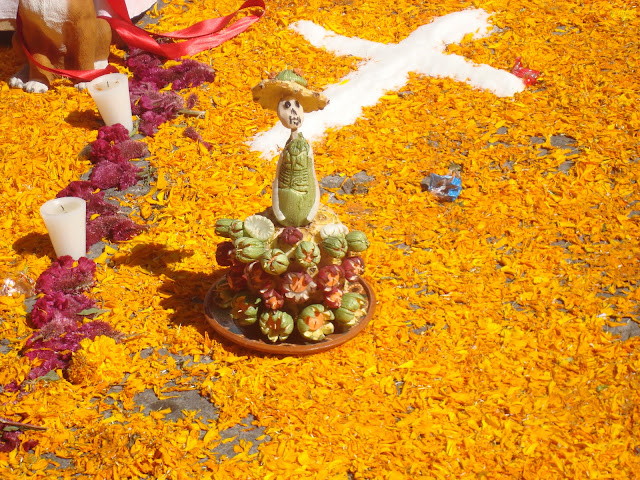 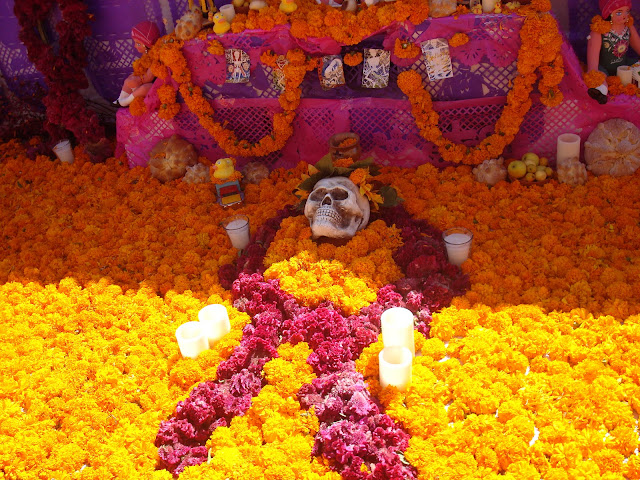 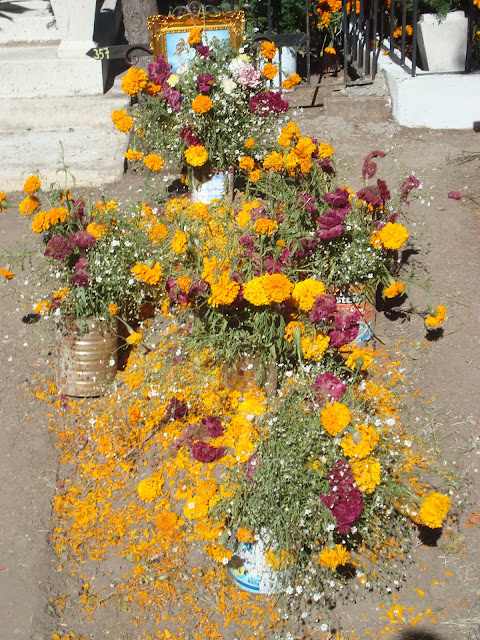 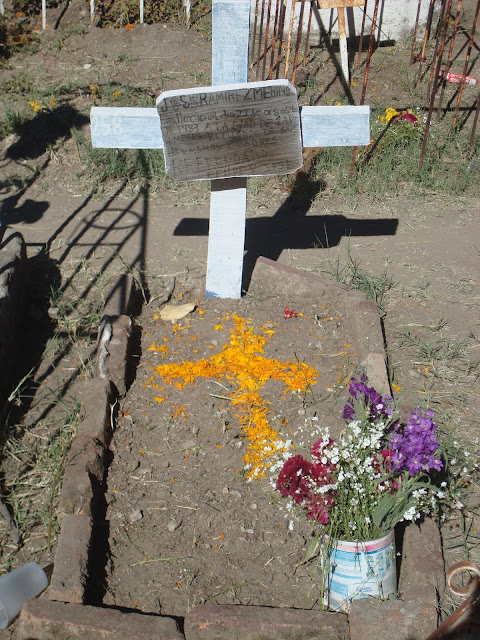 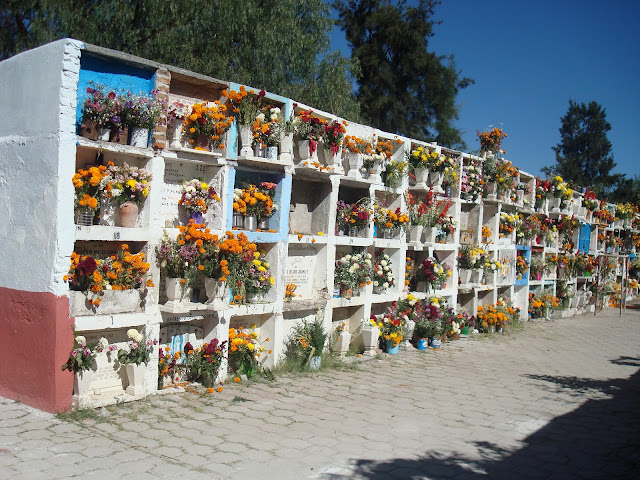 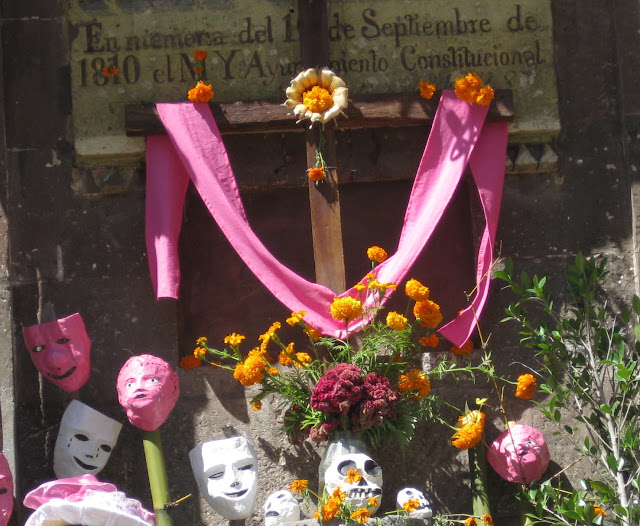 Details of an elaborate ofrenda... 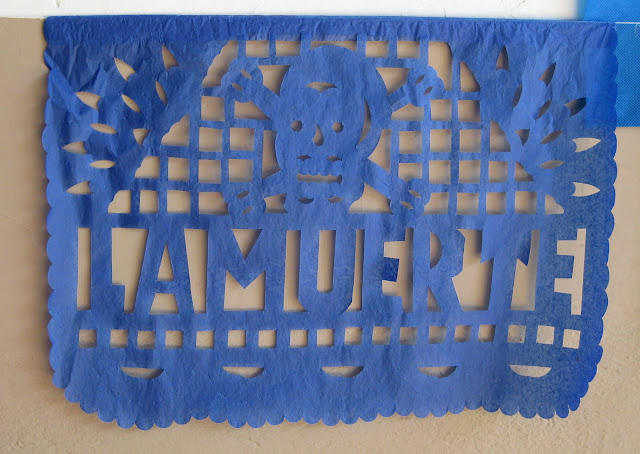 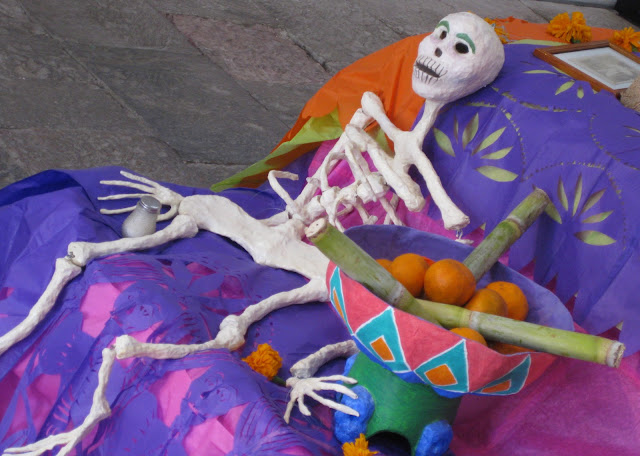 A skeleton with traditional food offerings, sugar cane and oranges--to nourish the souls of the dead 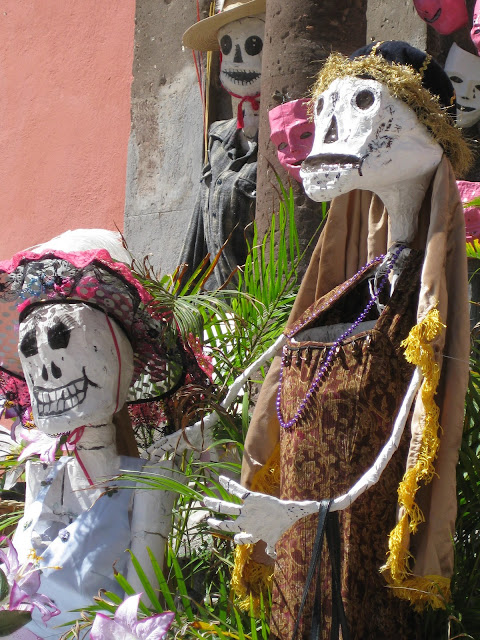 In Pre-Columbian Mexico, the skull was a symbol of life rather than death 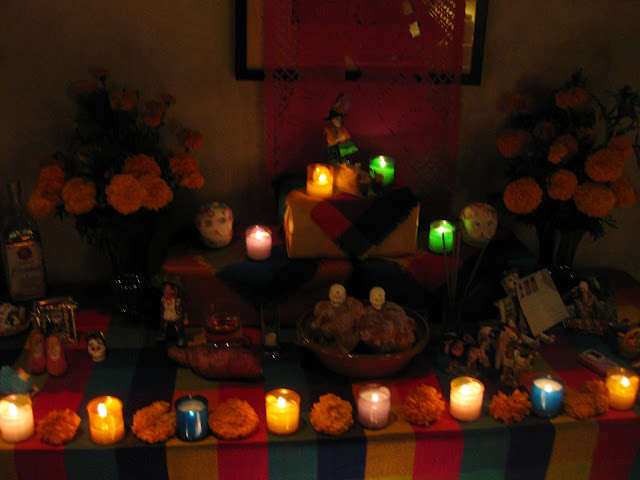 An altar in the home of a friend... 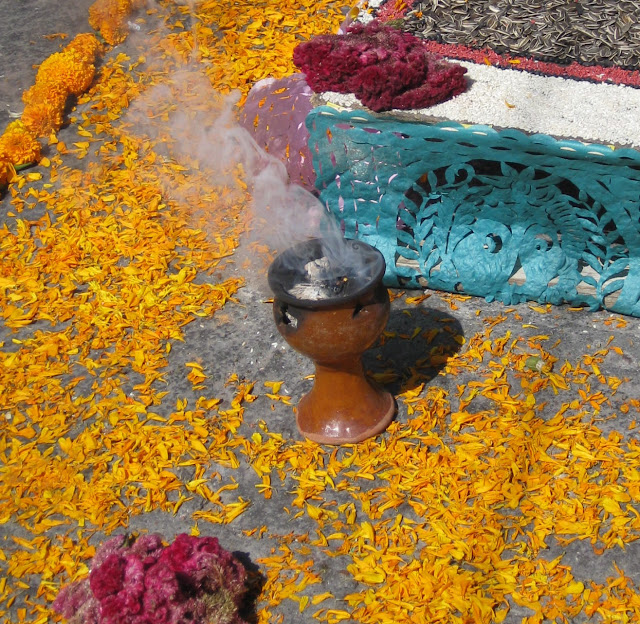 The dried resin of the copal tree is burned as incense, illustrating the ancient Aztec belief that it both attracts the souls of the dead at the same time as it wards off evil spirits--it also traditionally represents the transformation of matter into spirit 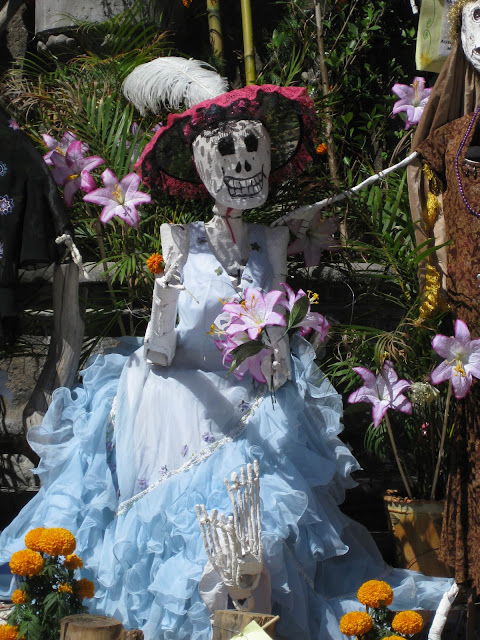 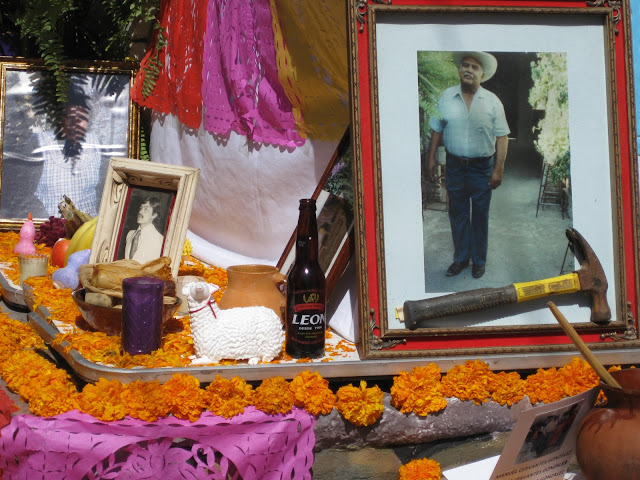 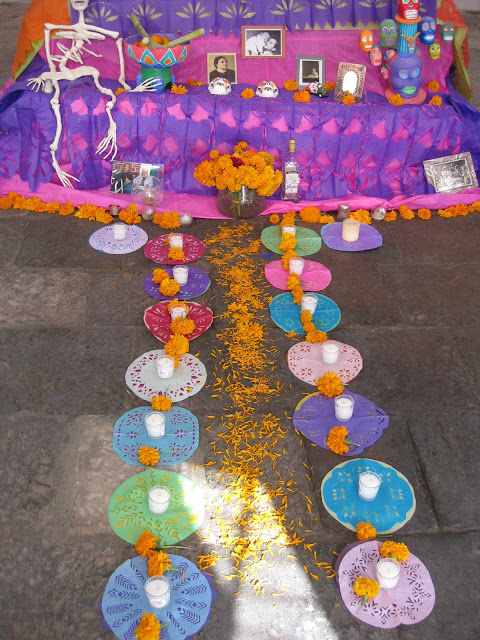 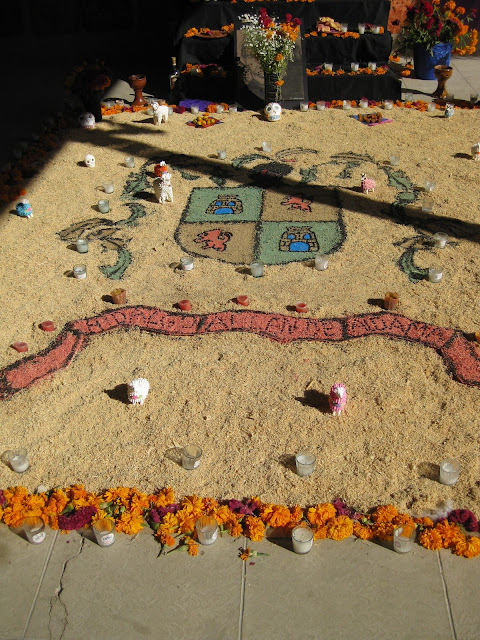 Seeds, nuts, sawdust mark the patterns in this elaborate altar 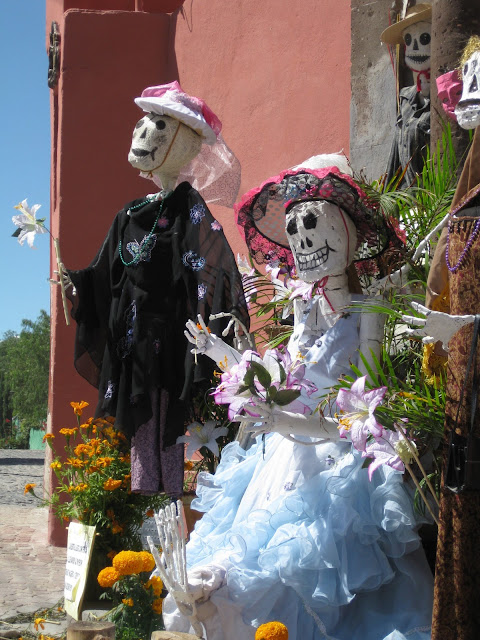 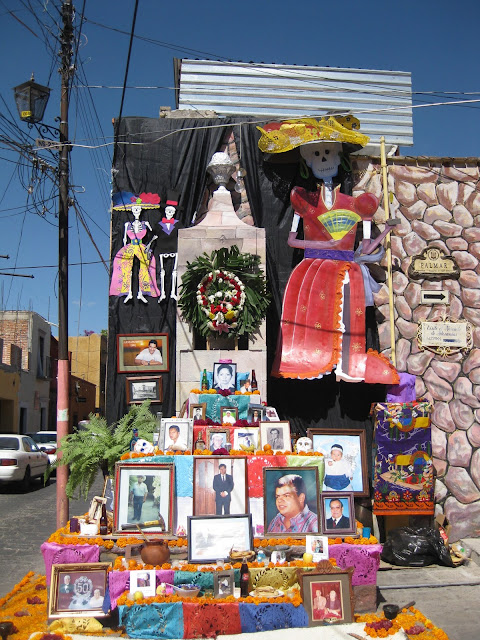 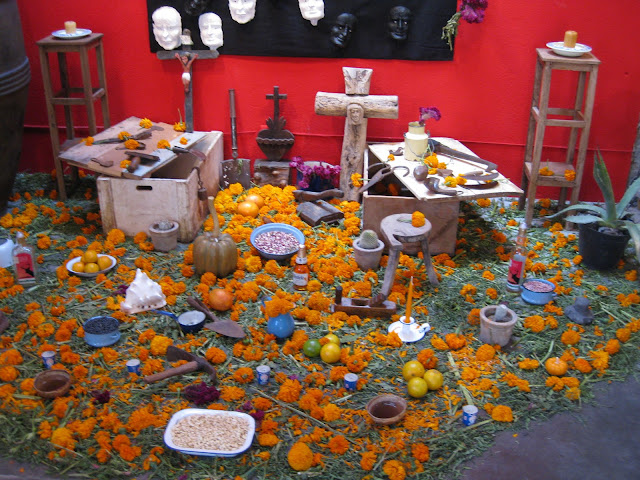 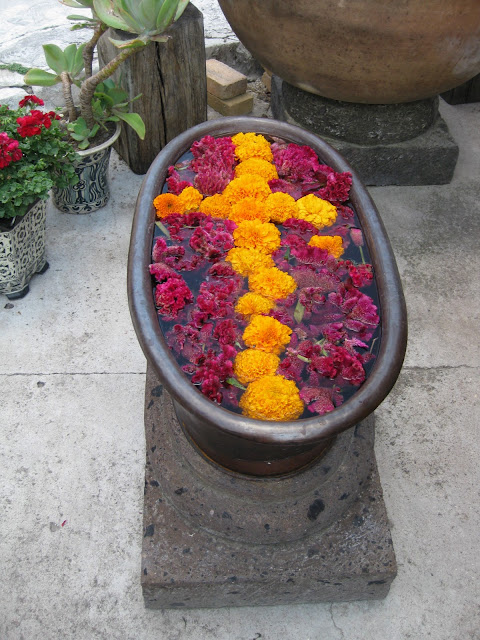 Flowers, fragrant and beautiful, symbolize the brevity of life
Posted by Victoria Challancin at 12:03 PM

i appreciate your words,its really very great one this one very helpful blog .the i'll

absolutely get lot's of information regarding seo process that how it works.
runescape gold for sale
FF14 CD Key