Two Easy Sides and an Obsession 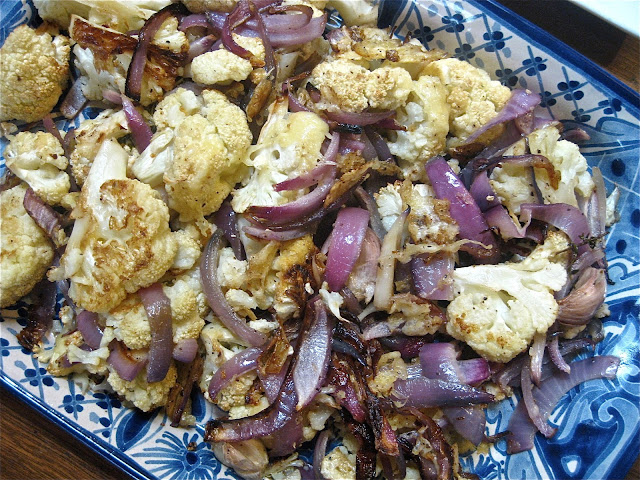 Two Easy Sides and an Obsession
by Victoria Challancin

How did we cooks manage before we started roasting vegetables?  And when, exactly, did this simple cooking technique enter our lives?  I can barely remember a time when I wasn't tossing every possible vegetable available with a touch of olive oil, perhaps garlic, salt, and pepper, and popping it into a very hot oven to caramelize, soften, and finally arrive at the table in all its concentrated-flavor glory.  And now, using this technique is practically an obsession.  An obsession that works with almost every cuisine.  I simply change up the flavor principles to work with whatever cuisine I am preparing.

Roasting is simple--and it brings out the natural sweetness of vegetables, while often lending a hint of nuttiness.  And it is fast.

My Basic Recipe for Roasting Just About Any Vegetable: 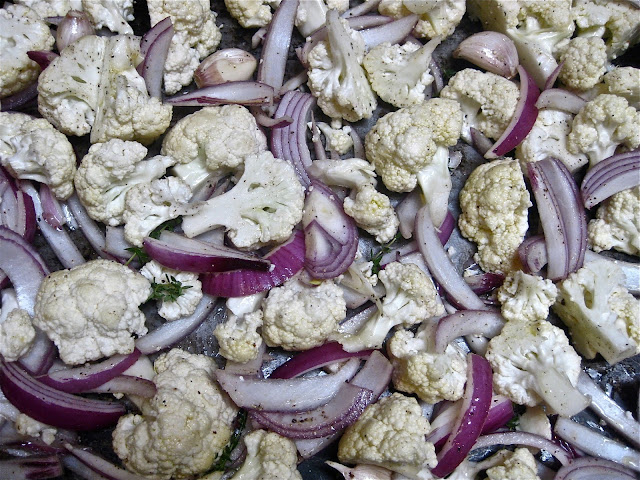 The cauliflower, before roasting

Place all ingredients except cheese on a baking sheet.  Toss to mix.  Roast, tossing occasionally, until almost tender 35-40 minutes. Sprinkle with cheese, toss to combine, and roast until tender, 10 to 12 minutes longer. 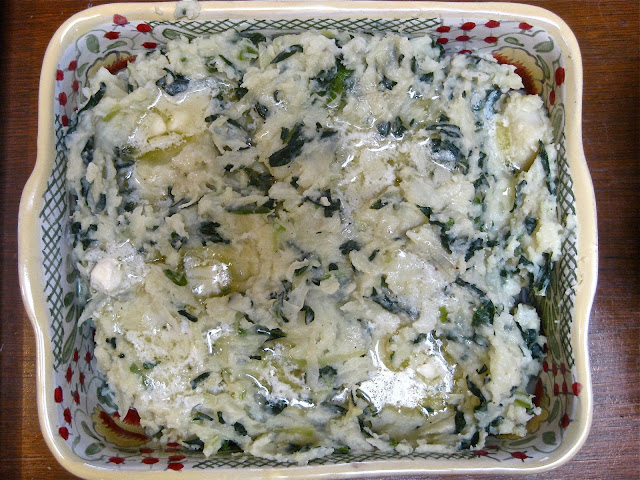 Another easy side dish is Colcannon, my nod to St. Patrick's Day.  Colcannon is one of several well-known Irish sides, along with Champ, its near cousin.  In fact, the Brits, in general, have several popular dishes which mix cabbage or kale and potatoes and/or turnips or Swede (rutabaga to Americans).


Cook's Notes:  In last week's class we made Colcannon with cabbage and spinach, because I had no kale due to a recent freeze.  We topped it with pats of butter in the traditional way.  I chose a recipe from Simply Recipes as a guideline, but variations are endless:  add bacon, leeks, parsnips, turnips, or chives, to the basic potato mash.  Green cabbage, Napa cabbage, Savoy cabbage, kale, chard, spinach, or any leafy green can be used.  It is nice to mix one of the darker greens with the lighter cabbage just for a more dramatic look.  I also added freshly ground black pepper.

Put the potatoes in a medium pot and cover with cold water by a least an inch.  Add 2 tablespoons of salt, and bring to a boil.  Boil until the potatoes are fork tender (15 to 20 minutes).  Drain in a colander.

Return the pot to the stove and set over medium-high heat.  Melt the butter in the pot and once it is hot, add the greens.  Cook the greens for 3 to 4 minutes, or until they are wilted and have given off some of their water.  Add the green onions and cook 1 minute more.

Pour in the milk or cream, mix well, and add the potatoes.  Reduce the heat to medium.  Use a fork or potato/bean masher and mash the potatoes, mixing them with the greens.  Add salt to taste and serve hot, with a knob of butter in the center. 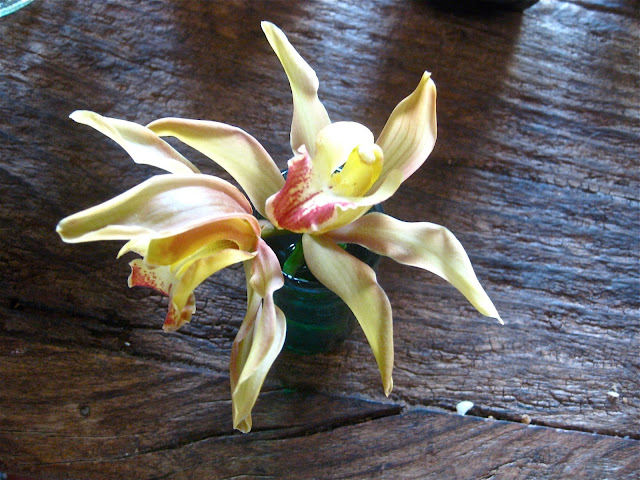 Like life and love, recipes are meant to be shared, but please ask permission before using photos or text.  Thanks! 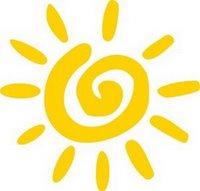 I am not familiar with the British sides you mention but now I know how funny the names are. Thanks for sharing. :)

Oh, what a delightful post, even tho' I don't really quite share your obsession! Not that I don't appreciate it, but a degree of thriftiness ensues when putting on the oven for one!! Yes, steaming and stirfrying vegetables does need extra care with flavours, but :) ! And a lovely Sunday morning memory of the times I have actually cooked the 'British' sides at times - mostly colcannon in my case! But 'rumbledethumps' seems like something out of 'Alice in Wonderland' or 'Hogwarts': hmm, what a lesson!!! Are you sure - someone had a wonderful sense of humour there . . .

Rumbledethumps is definitely real! Just ask any Scot. But it does sound a bit like Jabberwocky or at least the Hogwarts

I adore roasted vegetables and every time I do them, I need to add in some sweet red onions-they caramelise so beautifully! Sometimes I just do a tray of onions as I adore them so :)

I only roast these days and what a treat they are....

I love roasting vegetables but I don't roast as many varieties as you do - I need to be more adventurous. And the British were so good at not letting anything go to waste by using up things by combining them with mashed potato and the old had become new. xx

I don't know whether it's through food blogs and the worldwide obsession with all things food or the globalization that occurred in the past decade(s) or so, but it's all good. I, too, only roast most vegetables. If it's something that needs liquid stove top, I only use broth. No mas agua! It only leeches flavor and nutrients. :)

I often wish I could go back in time to see the moment when humans discovered cooking techniques -- wouldn't that be fun? Roasting is one of my favorite ways of cooking vegetables. Your cauliflower and potatoes look so good!

You have a gift for teaching Victoria.
You break up any process into easy clear steps and I just love your tips and advice
I love roasting vegetables, the transformation they go through in the oven is magical

I love roasted vegetables...we have roasted sliced potatoes and asparagus last night. Tonight it's roasted cauliflower. Don't mind having the oven on as it is still so cold.

Karen--I, too, made roasted veggies last night, but for vegetarian tacos. It is supposed to be 88F here today--rare for this time of year.