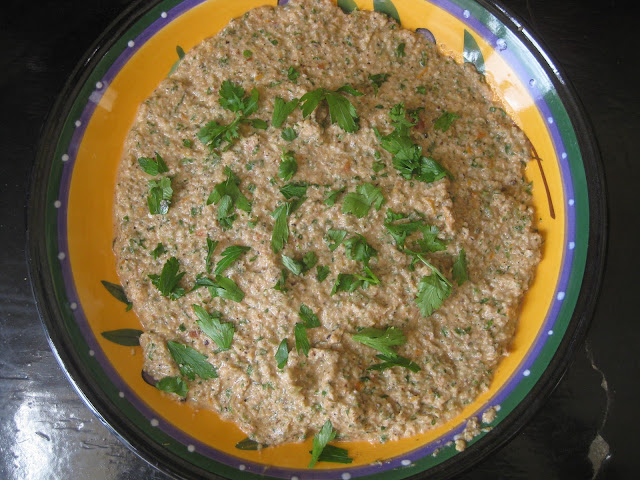 When I first tasted sikil pa'k while on a trip to the Yucatán Peninsula of Mexico over 25 years ago, I didn't really understand what I was eating.  I just knew it was utterly delicious and like nothing I had ever tasted before.  Someone tried to explain it to me, but my Spanish was non-existant then, so I truly didn't understand.  Subsequent trips, a lot of Spanish practice, and a more thorough understanding of Mexican cuisine revealed this unctuous, rich, deeply flavor culinary treasure to me.
Over the years I developed my own version, which I have taught in Mexican Cooking Classes many, many times--and always with rave reviews. I can't think why I haven't posted it before...until yesterday, when I taught it yet again and realized that you, my dear readers, need this recipe.

Yesterday, I taught a simple demonstration class at a friend's house to the Plant Study Group I belong to.  I prepared four rather simple, globally-inspired blender sauces/dips replete with fresh herbs.  In spite of countless possibilities for Mexican salsas, I finally chose sikil p'ak, simply because I love it, haven't had it in a while, and had been recently reminded of it in an article in a recent Saveur magazine, which featured Mexican food doyenne, Diana Kennedy.  The version featured in Saveur  uses hulled pumpkin seeds as do I, but Kennedy's version, found in one of her books, includes both hulled and unhulled pumpkin seeds. I prefer the hulled variety.  But hey, who am I to argue with Diana Kennedy?  If you check around for recipes, you will find various versions which include onions, chives, and more.  My personal take on this recipe suits my tastes--but you will discover how you prefer it with a little experimentation (and I can almost guarantee you will make it more than once!).

What, exactly, is sikil p'ak?  The word sikil simply means "pumpkin seed" in the Mayan language and p'ak means "tomato."  The dish refers to a dip, rather like hummus in consistency, made of roasted tomatoes, chiles, garlic, cilantro, and toasted pumpkin seeds.  Simple to make, this earthy dip is simply unforgettable.  I've never served it to anyone who didn't ask for the recipe--and that is the bare-bones truth! 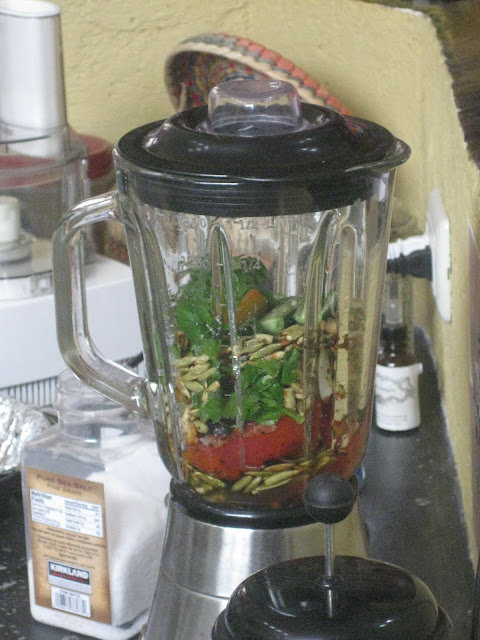 A blender is indispensable to Mexican cooking--here, if you have electricity, you have a blender.

A Wee Bit of History
Because the Spanish Conquistadors documented so well everything they encountered as they swept through Mexico in the 1500s, we know exactly what the indigenous people were eating then.  Various squash seeds, tomatoes, and chiles were ubiquitous.  The famous pipianes, pumpkin seed moles, were consumed as was probably a salsa much like this sikil p'ak.  Although the native people had no pork, beef, or chicken, they did have turkeys, some wild javelina pigs, seafood, and other sources of protein to serve with these dishes.  And tortillas, our beloved corn tortillas... 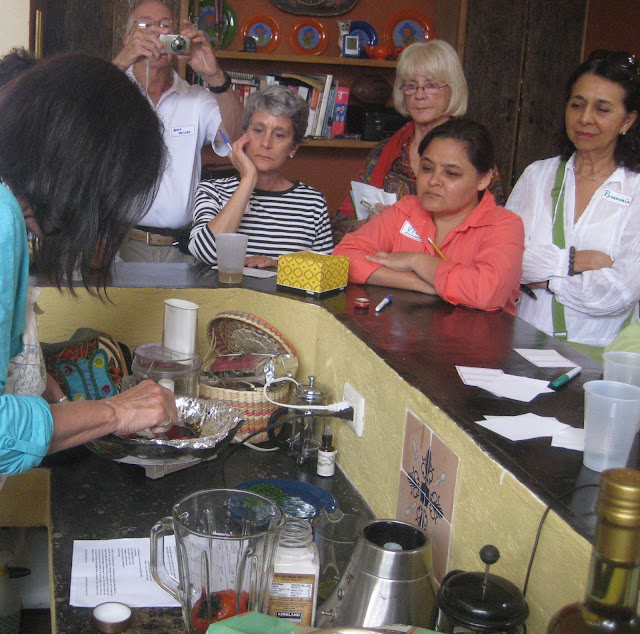 Cook's Notes:  This is one of those dips you need to play with.  Add more or less cilantro, lime juice, and chile to taste.  In the Yucatán, scorchingly hot chiles habaneros would be used.  I prefer to use the spicy, yet sharp serranos instead.  I also don't usually roast the chiles if using serranos, but typically the chiles are roasted with the tomatoes and garlic.  Up to you.  I also use hulled pumpkin seeds, but many recipes call for a mix of both hulled and unhulled--again, up to you.  Because seeds, like nuts, are natural thickeners, this dip will thicken with time.  Simply thin it with a bit of water if you happen to have enough leftovers to serve it a second time!  It is great with chips (I used organic corn chips) or totopos, but a warm, soft corn tortilla would also be lovely.

Place the tomatoes and unpeeled garlic cloves on an aluminum-lined skillet or atop a comal over medium-high heat.  Roast until blackened in spots, approximately 8 to 10 minutes, depending on the size of the tomatoes.  When soft, peel and place in the jar of a blender (I like to leave a little of the blackened skin on the tomatoes).

Place the pumpkin seeds in an even layer in a dry, heated skillet over medium-high heat.  Stir constantly as seeds begin to brown lightly and pop.  Be careful not to burn.  Set aside and allow to cool slightly.

Place pumpkin seeds and all remaining ingredients in the blender with the tomatoes and garlic.  Purée, adding enough warm water to facilitate blending so that you have a thick, but loose enough texture to use as a dip.  Check and adjust seasoning to taste. 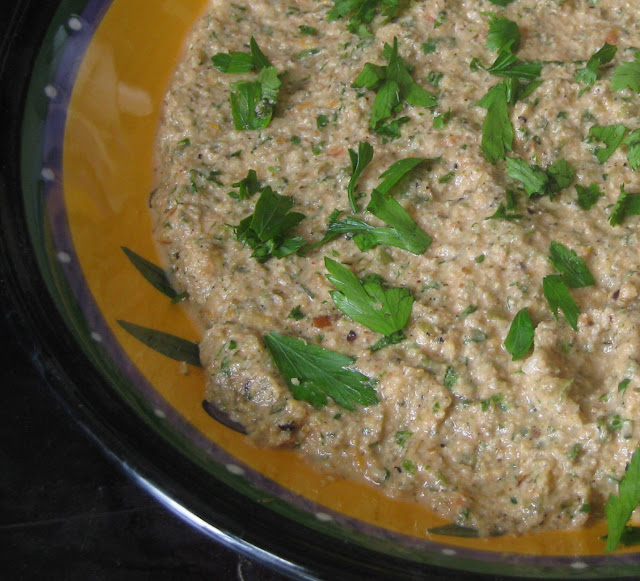 Special thanks to my friends Beverly Spiro for hosting the class, Carole Schor for being my faithful sous chef, and Carrie McIver for snapping photos--and all others who had a hand in the prepping for the class! 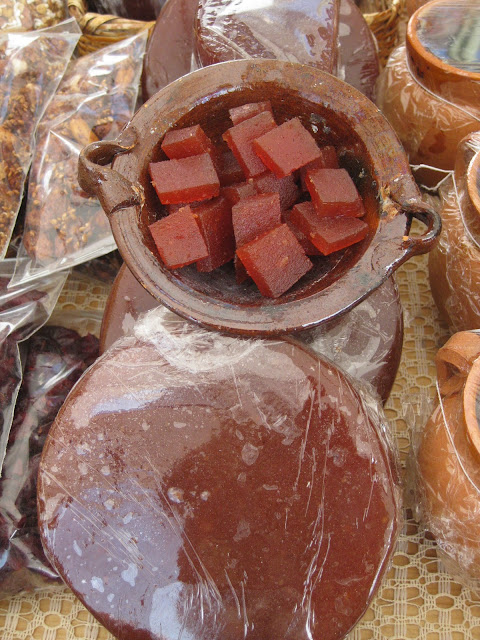 Ate de Guayaba, or guava paste for sale in the Organic Market

Like life, recipes are meant to be shared, but please ask permission before using text or photos.  Thanks!
Posted by Victoria Challancin at 10:37 AM

It may not be the prettiest dish on the table (because of the color), but I bet it's right up there with 'the tastiest'. I love pepitas (never heard Mayan name) and i will definitely be trying this. Thanks for this post.

Having been 'into' food as long as I have, most recipes read are at least somewhat familiar and many have been made in my own kitchen! This is one entirely new, tho' am on nodding acquintance with all the ingredients: what a delightful new taste to try - soonest!

What a fabulous dish! And both gluten free and fructose friendly! You often have recipes that I can eat...thankyou so much!

The Sikil P'ak dip sounds delicious. I can't wait to try this as I love and use pepitas as lot.

I've never had this dip before but I'm intrigued by it as we always seem to have a lot of pumpkin seeds! :)

This sounds very interesting, I know the tomatoes and garlic would be amazing but I am really curious about the pumpkin seeds..I look forward to tasting this Victoria

Thanks for reminding me of this. It's been over 20 years since I have tasted it.