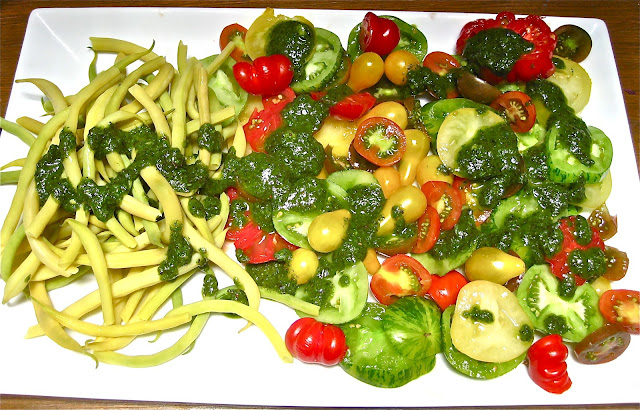 With new produce appearing almost weekly at our local organic market and local farms, it is easy to be dazzled.  This week I was struck by the tomatoes.  Lots of tomatoes.  Green Zebras (the first time to find these!), tiny yellow teardrops, baby chocolate cherries, miniature beefsteaks (is there such a thing?), and more.  So of course I bought a few of each, just because they were pretty.  Ditto for the yellow wax beans--another first in the market.

I returned home with my treasures, along with some very good cheeses and bread, plus purple and large-leafed basil, and thought about how I would use them.  Frankly, a quick steam of the beans, slicing of tomatoes, whirling of a pesto-type drizzle--and a big part of lunch was done.  And it beckoned. 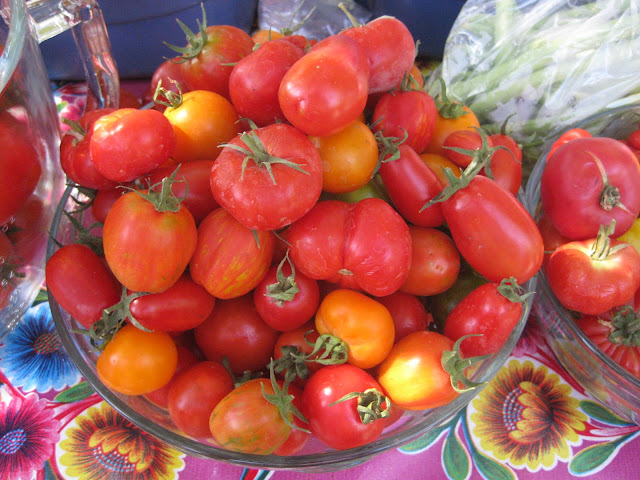 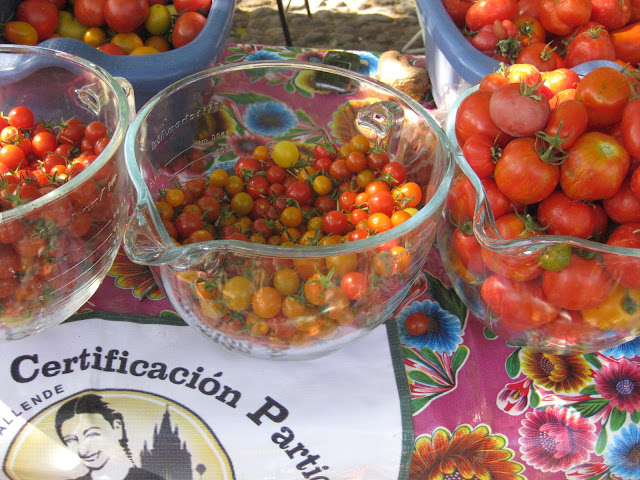 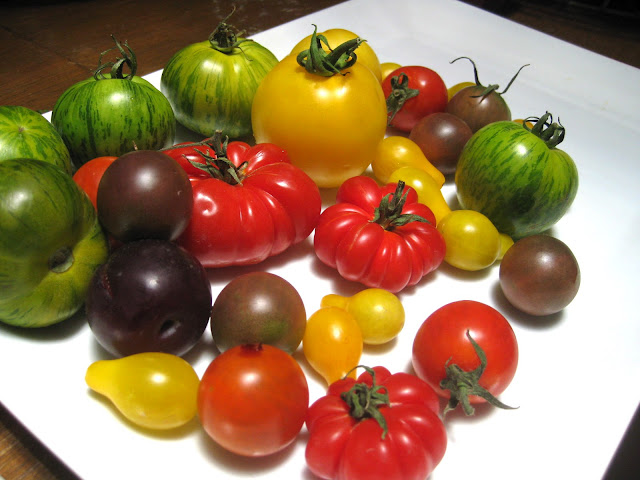 Yes, that is a stray plum, not a deep purple tomato   (They were disinfected together) 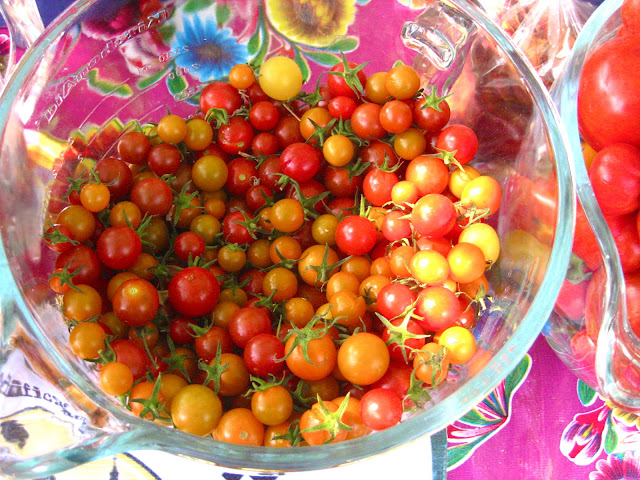 History of the Plump Thing with a Navel
( I am paraphrasing the following facts mainly from investigative reporter Barry Estabrook's revealing Tomatoland:  How Modern Industrial Agriculture Destroyed Our Most Alluring Fruit and from Wikipedia)

Although it is hard to imagine southern Italian food, Provençal dishes, Spanish fare, or many cuisines throughout the world without the tomato, the tomato is in fact a New World plant which originated in the coastal deserts and Andean foothills of Ecuador and northern Peru.  The tiny tomato prototype that proliferated there,  was the predecessor of the modern tomato and was about the size of a garden pea.  Random mutations and human selection later led to the larger versions we now appreciate.  The actual domestication of the tomato took place in the Mayan world of southern Mexico or northern Central America, more than a thousand miles from its place of origin. You see, in its original form, the pre-Columbian Americans simply would never have bothered to domesticate such tiny berries.  Luckily for us, the Mayans did.

By the time Cortés conquered the Aztec capital of Tenochtiltan (now Mexico City), tomatoes were an importan part of the indigenous diet, appearing is a variety of salsas and stews.  Called tomatl, or "swelling fruit" in the Nahuatl language (or I have also read it comes from xitomatl which means "plump thing with a navel"), the tomato, as we know it today, was a hit with the conquerers, who took it with them on their return voyages where it caught on rather quickly in many areas.  The Spanish are responsible for introducing the tomato into the Caribbean, the Philippines, and later to Europe.

Even after a short 10 years, it was popular in Italy, where it was called mala aurea, or golden apples, referring to the yellow color which was popular.  The modern name in Italian is pomodoro, or golden apple.  As with the pineapple, which was actually rented as an ornament early in its European days, the early tomato was often viewed as merely decorative.  Later, tomatoes were used as medicine, particularly to treat ailments of the eyes.

In France, they were called pommes d'amour, or love apples, which could just be a touch of early French poetry, as I like to think, or less appealingly a corruption of the Spanish name pome dei Moro, or Moor's apple.  By the end of the sixteenth century, tomatoes were an established part of the southern European diet.

The British, cautious as ever, were latecomers to the appreciation of the tomato.  Used for its medicinal powers only, the Brits didn't embrace the tomato as food until much later.  In fact, the tomato was considered unfit for eating, if not actually poisonous by many in Britain and by their early American colonists.  But by the mid-18th century, tomatoes were a part of the daily diet in Britain.

Those early American colonists who did embrace the tomato called the fruit by its Mexican name, tomate (it is now called jitomate in Mexican Spanish, clearly from the Nahuatl xitomatl).  Although it was thoroughly incorporated into their cooking, many were suspicious of it (probably due to its bad press in the home country), as they were of many plants of the Nightshade Family...or the Deadly Nightshade Family as it is often called [I actually once read a terrific book called The Fascinating World of the Nightshades--not to be missed by plant-lovers or foodies or people like me that just love to read such as this].  We do know that Thomas Jefferson, who was exposed to the tomato while living in France, sent seeds back to America.

Introduced into cultivation in the Middle East by a British consul to Syria around 1799 to 1825, the tomato eventually became an indispensable ingredient in the regional cuisine.  Entering the region through Armenia, and possibly via certain royal families visits to France, the tomato was known early on by the Iranian term Armani badenjan, or Armenian eggplant, an unintentional tribute perhaps to the fact that they both belong to the nightshade family. 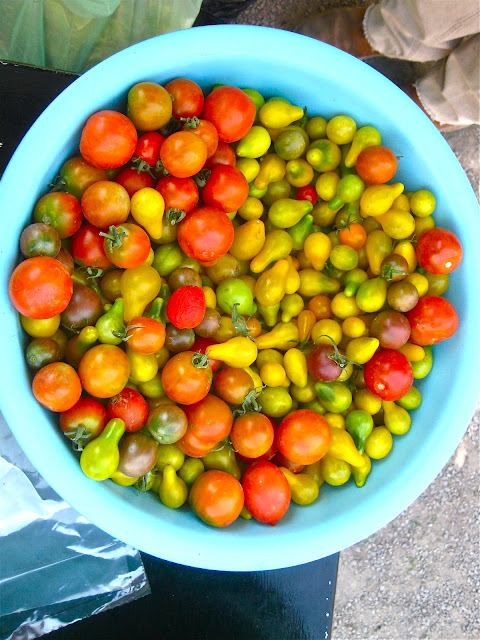 Tomato Facts and Fun
Here are some random facts about the now-beloved tomato: 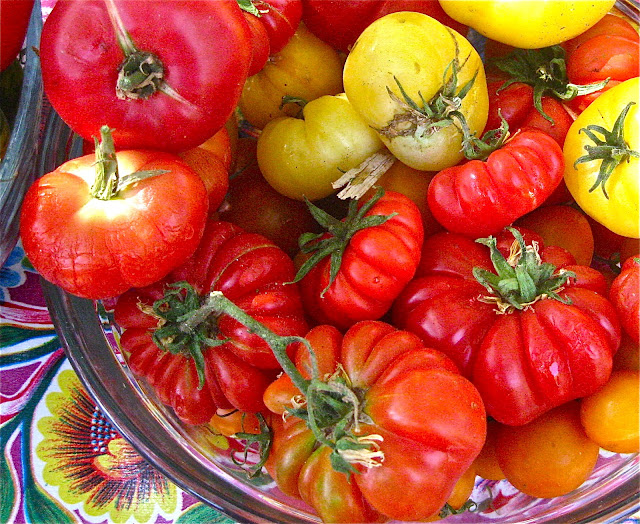 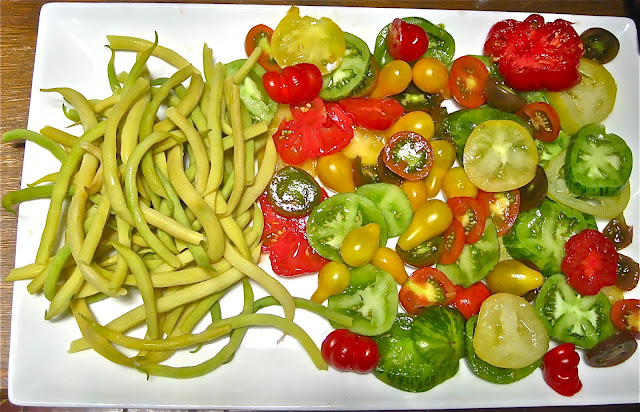 Cook's Notes:  This is just one of those dishes that requires no recipe.  The basil drizzle is particularly dark because it contains both purple and green basil.  You could make this a Genovese-type pesto by simply adding Parmesan cheese and pine nuts or walnuts.  I also spiced this up with a touch of chile flakes, but this is optional.


A Non-Recipe Recipe:  Wax Beans and Tomatoes with a Spicy Basil Drizzle
(Recipe by Victoria Challancin)

Trim the stem end from the beans.  Steam until cooked, but still slightly crunchy (Time will depend on the age of the beans).

Place the beans and tomatoes on a platter.  Drizzle with the basil puree.

Note:  Save any remaining basil drizzle in a jar topped off with olive oil to prevent oxidation. 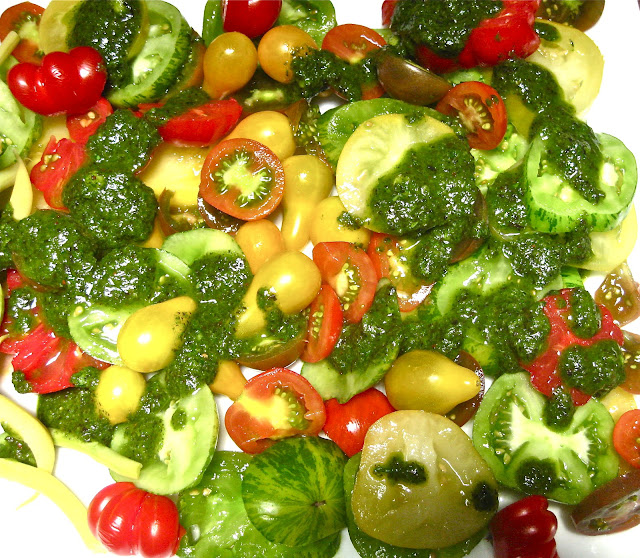 Like life, recipes are meant to be shared, but please ask before using text or photos.  Thanks!

Posted by Victoria Challancin at 11:05 AM

These tomatoes are absolutely gorgeous! Yum :)

What absolutely beautiful, delightful photos; I have scrolled up and down repeatedly and cherished in being in 'Tomatoland' :) ! The pics bring such warmth and sunshine into our current winter! And not only is your wonderful information for personal filing, but you have just helped me help others! I have been known to write 'healthy foodie' articles for our free community newspaper. Would you believe am in the middle of 'To cook or not to cook' [corny, I know - apologies to dear Will :) !] regarding vegetables, and tomato, carrots and mushrooms are the three better the second way. Just as you state re the 'plump things'!

I didn't know that tomatoes have only fairly recently been used by Western countries. I just can't imaging not having tomatoes in my diet. They would be an ingredient I eat fresh or cooked almost every day. Your tomatoes look gorgeous with all their different shapes, sizes and colours and what a wonderful lunch xx

#1 gorgeous photo! i love the idea of purple pesto! #2 such a great history...it's amazing how much impact american (all the americas, that is) foods have had on world cuisine. #3 i just noticed you are in san miguel allende. what a gorgeous town! i visited a few summers ago and was very impressed. jealous you get to live there!

Isn't it funny about the British being late to appreciate the tomato?! I had no idea about that. I'm crazy about them and all of the colours and shapes that have come around again are like colourful jewels :)

Great pictures and wonderful tomatoes. I've never thought about the history of the tomato, well, not further back than the that they come from the Mediterranean. Perhaps I should try some late plants and get going with the growing this year and not next. GG

What an unbelievable selection of gorgeous tomatoes! Thanks for your informative post! The tomato and wax bean salad with pesto looks amazing!

People never want to believe me when I tell them that tomatoes are from the new world. Then I give them the name origins and they believe me a little more, hehe:)

I'm so jealous at all of the varieties you came home with. Here I'm lucky if I find a Dutch kumato tomato. Another great post Victoria!

Hi Victoria - sending our first greetings from the States! I'm glad that we are slowly easing to the new chapter of our life. How I miss cooking and eating with fresh ingredients! This is a fantastic post. Thanks for sharing all the interesting facts about tomatoes. The endless variety of tomatoes are just incredible. Oh, I'd love to visit your farmer's market with you as my guide:) After reading your post, I can't wait to cook with my mother-in-law homegrown tomatoes. Too bad we still have to wait for another week or so.

Just love the post. I have taken my fair share of tomato pictures and they are all beautiful. Right now I am sitting on a bunch to prepare for my husband. He loves his Burata with heirlooms...