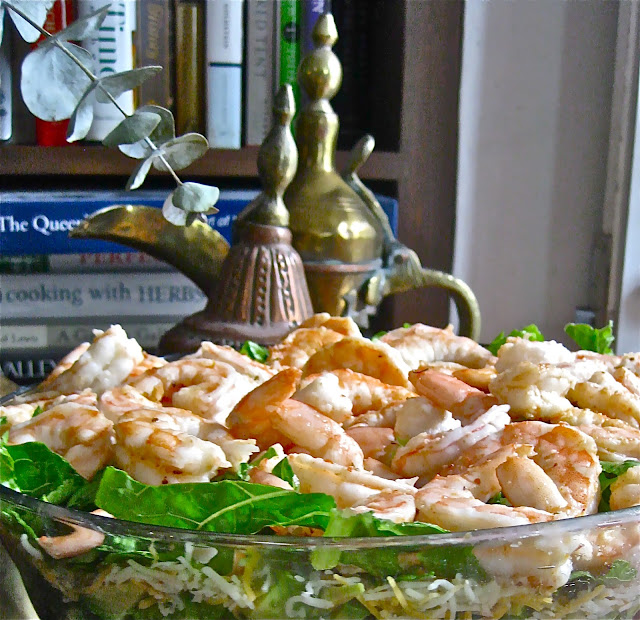 Apocryphal stories abound in the food world and elsewhere.  We bat about stories as if they were true (and sometimes they are!), pass them along, and history is more or less made.  Take the Cobb salad, for example.  Basically, a Cobb salad is a main-dish garden salad made of some type of greens, meat protein (often chicken and bacon), hard-cooked eggs, avocado, cheese (blue or other), lined up prettily in rows on a plate and drizzled with a red-wine vinaigrette.  Originating in the 1930s at the Hollywood Brown Derby restaurant in Los Angeles, the salad became the restaurant's signature dish.  It was, and here is the apocryphal nature of the story, invented by the hungry restaurant owner, R. H. Cobb, or by one of his chefs one late night when Cobb entered the kitchen hungry and looking for something to eat.  Either Cobb or the chef created the dish out of whatever could be found in the late-night kitchen suitable for a salad.  Whoever invented it, it has become a staple in restaurants throughout the U.S., and is still being updated in myriad ways [click here for  a version I made in class:  Shrimp and Gruyère Cobb Salad  with Pickled Quail Eggs drizzled with Low-Fat Green Goddess Dressing].  It may be retro, but it is definitely a keeper.

Layered salads are yet another retro food item.  I grew up in the 50s thinking them kind of tacky, probably due to the presence of frozen green peas and mayonnaise that seemed to accompany this dish at practically every potluck I ever attended in my childhood in the South.  Popular in the fifties, this salad, too, has made the rounds and has been modified, updated, and recreated over and over again.   Thank Goodness it has been modified.  And here is a version that worthy of that reinvention. 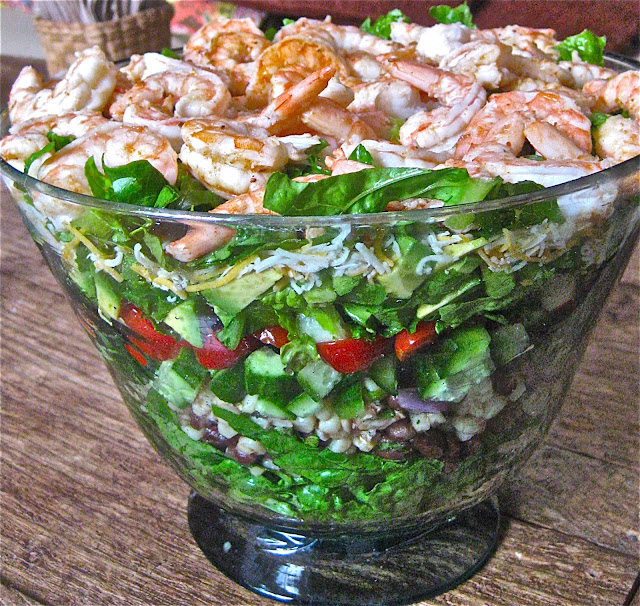 Recently, my sister-in-law sent me a link to Skinny Taste's blog where Gina, the popular blogger and magazine writer, feature a very pretty version of a layered Cobb salad with Mexican flavors.  See her original version here.  Below you will find my slightly adapted take on the dish, which was quite a hit.  It was healthy, pretty to look at, and full of bright flavors. 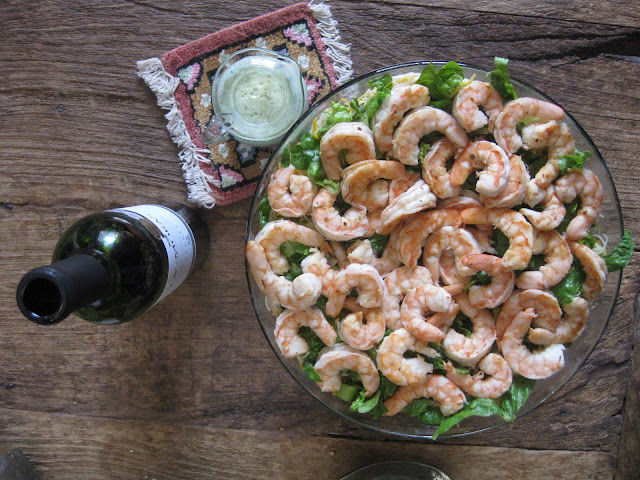 A bird's eye view of the salad

Cook's Notes:  I used Emeril's seasoning, but either ground ancho or chipotle chile would also work, as would a touch of Old Bay's seasoning or any Cajun or Creole spice blend.  Freshly cooked black beans would also be a plus.  I used really sweet, fresh corn cut from the cob and "grilled" in a dry skillet until browned in places.  I used twice as much avocado as called for in the original recipe as well.  I did have the Mexican blend of cheese for some odd reason, so I used that, but any nice Mexican cheese could be substituted according to your taste.  A bit of purslane and/or watercress wouldn't go amiss in this recipe either.  You could deflame the red onion in water with a touch of lime juice or vinegar, if desired.
Recipe:  Mexican Shrimp Cobb Salad
(Adapted from a recipe from Gina's Weight Watcher Recipes via skinnytaste.com)
Serves 6 as a main dish

Bring to a boil a pot sufficient water to cover the shrimp by 1 to 2 inches.  Add the shrimp and cook for two minutes, stirring constantly, or until one or two shrimp float to the surface.  Note that the water may never come to a second boil.  Immediately drain the shrimp and place them in a water bath with ice.  Drain, place in a large bowl, and set aside.

Leave shrimp whole, or roughly chop into large pieces depending on the size of the shrimp and your personal preference. Toss shrimp with a little salt, seasoning blend, and fresh lime juice.  Set aside.

Roast corn in a dry skillet until golden in places. 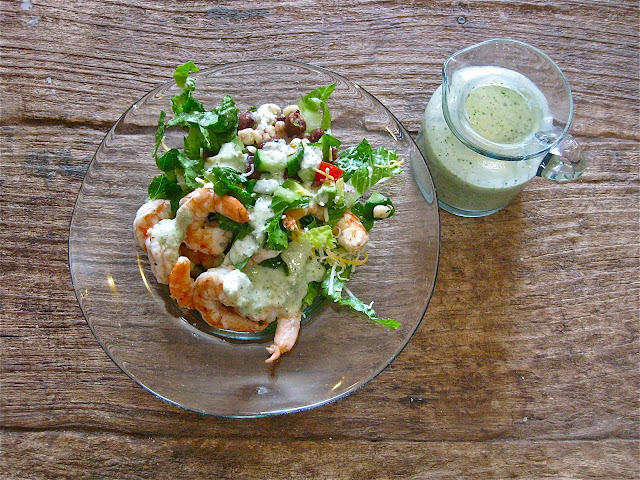 The layered salad unlayered on a plate

Cook's Notes:  I didn't have access to buttermilk so I simply substituted Mexican sour cream.  I also used plain yogurt.  I opted for a touch of fresh parsley as I don't like dried and I added an extra bit of cumin.  This is definitely a list of suggested ingredients that come together in a lovely way.  Just adjust the acidity, heat, and spices according to your own taste.  I will use this recipe base over and over again!
Recipe:  Creamy Cilantro-Tomatillo Dressing
(Recipe from Gina's Weight Watcher Recipes via skinnytaste.com )
Makes 1 3/4 cup

Combine all ingredients in a blender. 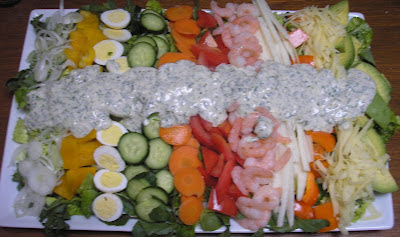 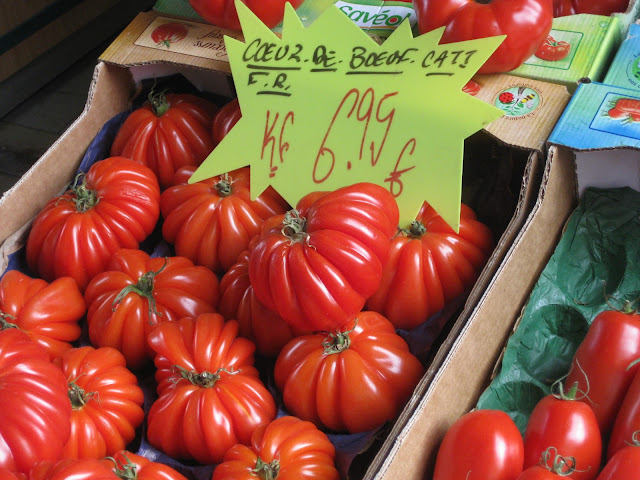 Remember that recipes, like life, are meant to be shared, but please ask before using my photos or text.
Thanks!

Posted by Victoria Challancin at 8:06 AM

I could eat the whole bowl. It may be retro but it sure looks pretty and all the Mexican touches take it to a new (and better) place.

I do love the look of those market tomatoes. I don't think we see tomatoes like that too often in Sydney. And I love the history you gave to the Cobb salad; I didn't know that. And your salad looks great Victoria; so much colour and so many flavours that work well together - delicious! xx

Oh-so retro! Oh-so-tasty! Oh-so-pretty! Oh-such-fun! Thank you for the memory, even tho' I have never had the chance to eat a Cobb salad. Methinks a 'salade arrangee' of the same vintage kind'of fits into the retro context also? And the tomatoes are just beautiful :) !

What a beautiful dish - love the retro aspects of it :D
Great post!

Wow! That looks amazing...the photo with all the layers is great!

Yay for retro salads! I love the dressing, it must be tart and creamy, just the way I like them.

Two of my favourite salads in one! You've got me thinking that I should combine more salads-I mean what a brilliant idea! :D

Wow! A totally gorgeous retro salad and the dressing sounds so delicious! Thanks for a lovely post!

I am with Joan...looks wonderful. I think Joan and I might make a trip to visit you...I wanted also to grab one of those tomatoes.

Oh, I so hope you do. We would have such fun. There is just so much to share here!