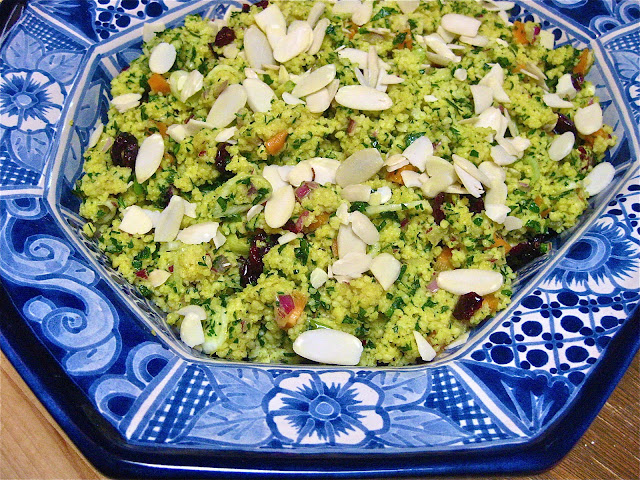 The ways in which recipes travel fascinate me.  We humans love food, and where better to share life, loving, and living than around a table with people you enjoy?  At least in my home.  And in the American South where I grew up.  Yes, both food and the recipes to prepare it are meant to be shared.  Take this one, for example.  Ina Garten's Curried Couscous from her Food Network show:  The Barefoot Contessa.  I just love the way this particular recipe had wings.

I'm not generally a big fan of American-style contrived couscous dishes.  Not at all.  Especially after eating the real deal in friends' homes in Morocco on my yearly trips.  But when my friend Jan, an Aussie living in Dubai, who is a wonderful cook and former caterer, mentioned this recipe by Ina Garten to me while we were traveling together in Morocco, I took note.  And when I was thinking of something to serve with a lovely Asparagus and Spinach Quiche with Phyllo Crust, this popped into mind.  I'm glad it did.  So from the US, to Australian Jan in Dubai, to expat-American me living in Mexico while traveling in North Africa, to you, here is a great curried couscous recipe! 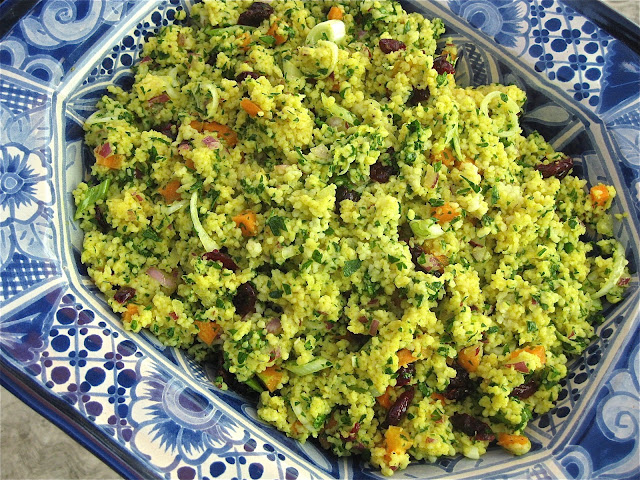 Curried Couscous before the almond garnish

This particular dish is enlivened with a curried yogurt dressing, crunchy raw carrots, and parsley.  Is it a salad?  Maybe.  It could be.  Is it a side dish?  Well...yes, why not?  It does have a touch of butter and is served room temp as are the side dishes of so many countries.  Whatever it is, it is lovely.  And it was a perfect accompaniment to a really beautiful quiche. 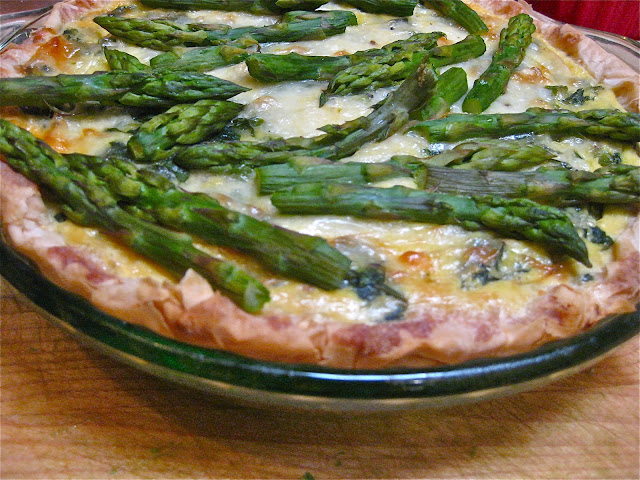 A Few Notes on Couscous
In Morocco, as in all of North Africa, couscous is far more than a culinary staple.  It is comfort food, par excellence, as well as an actual part of the cultural identity of the people.  It appears as feast food, ceremonial food, and as the focus of almost every Friday meal.

The term "couscous" itself refers to both the uncooked semolina pasta (which many people erroneously think of as an actual grain) and the actual cooked dish, which is often topped with a vegetable stew.  The actual Arabic word kuskus derives from the Berber term seksu, which affirms its use in the Maghreb, or the western part of the Arab world, long before the Arabs swept through in the year 632.

Today, couscous has traveled the world and made a home in many places.  We often think of couscous as only being the tiny, hand-rolled pasta made from hard semolina wheat, but in fact, the Berbers of Morocco often eat a couscous made from barley, or even corn.  In Brazil as well, you can find couscous made from cornmeal.  Millet is sometimes pounded or milled to size in some countries of West Africa and used as couscous.

To make couscous as most of us know it, the semolina is sprinkled with water and rolled by hand to form small pellets, which are then sprinkled with flour to keep them separate.  Next, they are sieved, to separate any pieces that are too large.  Again, they are rolled (yes, by hand!), sprinkled with flour, and sieved again.  And so it goes until the appropriately-sized granules are formed.   This incredibly labor-intensive process is beyond the scope and time of most modern Western cooks, who can be thankful for the instant variety available to them in Western groceries,even if it pales in comparison to the "real deal."  But if you have ever been lucky enough to taste handmade, homemade couscous made as it is in North Africa...well, your food world has truly been blessed.

In North Africa, couscous is traditionally cooked in a type of tall metal pot where a stew is cooked in the bottom part and the couscous itself sits atop it in a steamer where it is cooked, absorbing the flavors of the stew through the scented vapor that arises from the stew.  Actually, the term kiskas refers to the upper portion of this double-boiler contraption, and the lower part, where the stew is cooked, is called the gdrah.  Together the pot is often referred to by the French term couscoussièrre.  This technique of steaming the couscous causes the tiny grains to lighten and swell, yielding a dish of unsurpassed subtle flavor, texture, and complexity.  It's no wonder that after having consumed so much couscous in Morocco, that I often look askance at the instant versions of couscous that are so common in the West.

The couscous that is available to most of us may be a pale version of the laboriously produced, hand rolled versions of the Maghreb, but if it is fresh, you can still produce a nice dish, as in the following recipe.  It might not be authentic in any way, but it is still utterly delicious. 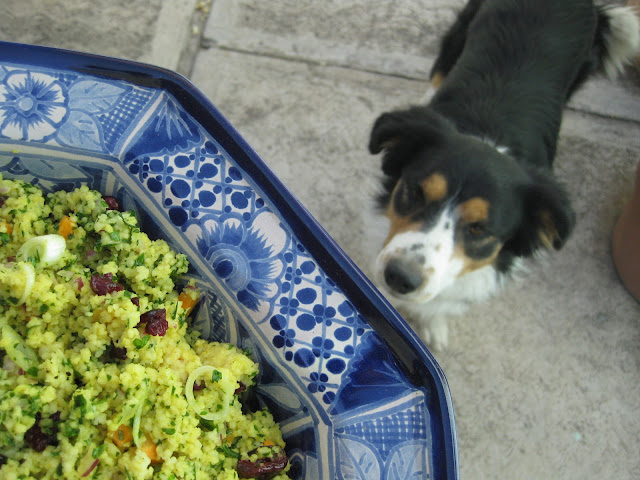 Trying for a bit of natural light outside with the ever-hopeful Roscoe, who just might like couscous

Cook's Notes:  I was lucky enough to have a box of really fresh "couscous" that was wonderful when reconstituted (no, I didn't double-steam it in a proper couscousièrre) with a bit of butter and very hot, just off the boil, water.  I also did not have currants, hence I substituted dried cranberries for color.  And although I do make my own curry spice blends when cooking Indian food, I will use a top quality curry powder such as the one I purchased from Penzey's Spices in a pinch--at least for this type of dish. 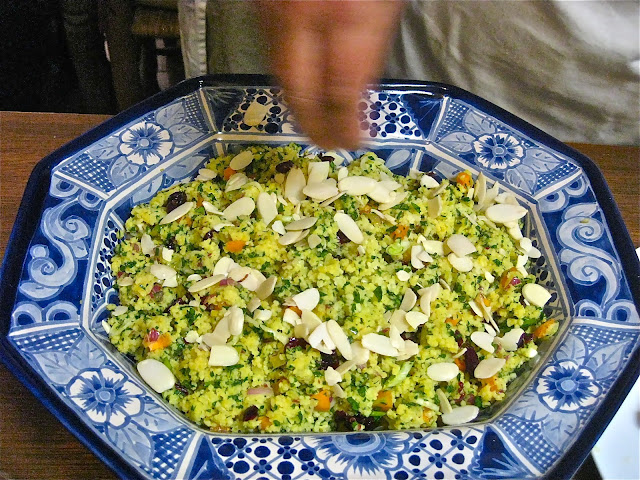 With the final garnish of almonds

Place the couscous in a medium bowl.  Melt the butter in the boiling water and pour over the couscous.  Cover tightly and allow the couscous to soak for 5 minutes.  Fluff with a fork.

Whisk together the yogurt, olive oil, vinegar, curry, turmeric, salt, and pepper.  Pour over the fluffed couscous, and mix well with a fork.  Add the carrots, parsley, currants, almonds, scallions, and red onions, mix well, and season to taste.  Serve at room temperature. 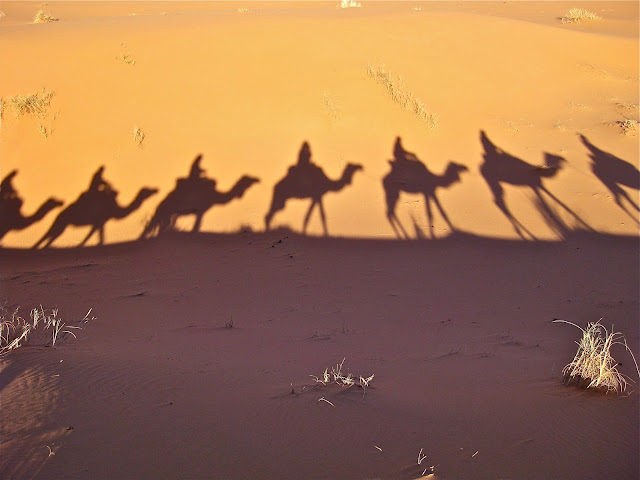 A camel trek from my last Moroccan trip--I'm the one on the right!

Remember that sharing recipes is a beautiful part of life, but please ask permission before using my photos or text.  Thanks!

Posted by Victoria Challancin at 10:23 AM

Now tell me: how does a reasonably intelligent woman absolutely live on curry, love couscous and never put the two together? This looks delicious on its own and will surely be tried [I'm afraid probably using curry powder :( ! ] over the weekend! Thank you so much for the idea!!

That looks wonderful Victoria and so many things go so well with couscous. I'd be there with Roscoe hoping for a taste ;)

I love couscous and your curried recipe has wonderful ingredients. I love that incredible platter you have presented it on - such vibrant colour. Is it from Mexico?

Thank you, Charlie. Yes, many of my dishes are from a local town near San Miguel de Allende that is famous for its Talavera pottery.

Wonderful! I love couscous and this post is both informative and delicious. Yum!

If you like this recipe, then it must really be a good one. I think the dressing that is mixed in with it must make it very tasty.

That recipe is like The Sisterhood of the Traveling Pants!
And that asparagus quiche looks wonderful.

Indeed it is, Joan. Great analogy!

My family has an old stand-by of a couscous salad that is a great crowd pleaser. I agree, though, that the fine grain couscous from Morocco is so much better than the stuff we find here! I am intrigued by the yogurt dressing...