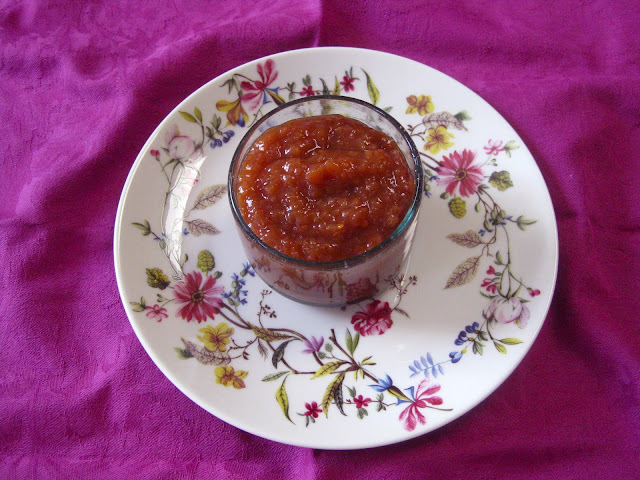 Notice to Subscribers:  Please excuse the reposting of this, but freaky things happened yesterday with my blog.  Mysteriously, though I haven't been near it since I wrote it, the post on Chia Seeds got resent, republished.  I have no idea how.  And then I noticed that this post was taken off and sent to "draft."  For this reason I am reposting this one as many people have written that they enjoyed it.  Please forgive the confusion and if you have any insights as to the evil genies that may lurk inside my computer, do let me know!  Thanks, v

It started with a glorious plum season.  Logically, it spread from there to how I could best use them.  A niggling desire to make my own plum sauce, instead of resorting to some icky-sticky stuff in a jar, spurred me to investigate the possibilities further.  So when I found this lovely, easy recipe from Serious Eats, it was practically a done deal:  Duck Sauce...  more accurately called "Plum Sauce"...a homemade condiment, easy to make and delicious, and guaranteed to inspire the invention of new dippers.

Plums have a long recorded history.  Originating in China, where they are still much-appreciated, plums were immortalized by Confucius who wrote about them around 479 B.C in both songs and in his listings of popular Chinese foods of his time.  Alexander the Great spread them across the Mediterranean region.  And by 65 B.C. plums, which were introduced to the Roman Empire by Pompey the Great, were growing in the orchards of Rome.  Today plums, the second most cultivated fruits in the world second only to apples, are found throughout the world.

Although I have travelled extensively in Asia, my experience with Duck Sauce was fairly limited to cheap, tacky packets of who-knows-what sugary chemical concoction that accompanied springrolls in everyday, lackluster Chinese restaurants that I visited while on the road in the US.   I never had such in Hong Kong or anywhere else in Asia.  Still, there was something that intrigued me.  I just knew if I made my own, it could be really good.  After forty or more years, I finally did it.  And the result was more than worth it.

The term"duck" sauce is of course a bit of a misnomer.  It has little to do with ducks at all, unless you count the misguided restauranteurs who served a plum-type sauce instead of the traditional hoisin sauce (more properly spelled "haixian") with their Americanized version of what we know as Peking duck, a far cry from the fabulous lacquered ducks found hanging from stalls all over Hong Kong.  Really, this recipe for duck sauce is plum sauce, pure and simple, whose history can be traced to its more authentic Chinese roots. Duck sauce, on the other hand, might include other types of stone fruits other than plums, such as peaches or apricots, as in this recipe.

Whatever we decide to call it, this easy recipe should certainly be in your repertoire to replace the purchased variety.  It is infinitely more interesting.

Cook's Notes:  This recipe is straightforward--easy and tasty.  I used dark purple plums with an orangey-red pulp.  The leftovers were perfect smeared over goat's cheese on crackers.  It would also work as a glaze for chicken, pork (particularly spareribs), or fish, and yes, with duck as well.

Purée until smooth with an immersion blender or in a regular blender.  Transfer to a bowl and serve immediately, or place in an airtight container in the refrigerator for up to 3 weeks. 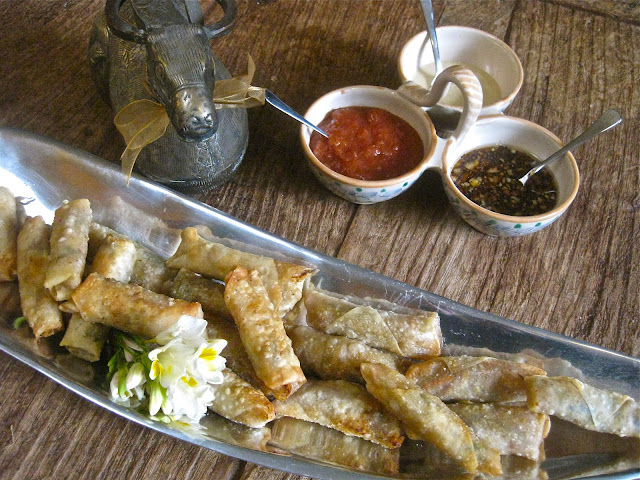 The duck sauce was really the star of this show as it was what I wanted to make.  The springrolls were quickly invented to go with it.  There are plenty of recipes which abound using oyster sauce, dried black mushrooms, and other ingredients.  I just picked common fresh ingredients and thickened a bit of soy sauce to bind them.

Cook's Notes:  Not having access to water chestnuts, I always add the readily available (here in San Miguel) jícama, which I actually prefer.  This recipe isn't particularly authentic, but it is made with common ingredients and makes a delicious appetizer, guaranteed to fly off the plate.  I served it with duck sauce, reconstituted dry Coleman's mustard, and a dipping sauce made with soy sauce, spring onions, hot sesame oil, and grated ginger.

In a skillet over medium-high heat, heat the sesame and vegetable oil.  Sauté cabbage for 2 minutes.  Add carrots, jícama, green onions, and snow peas.  Cook an additional one minute.

Whisk together cornstarch and soy sauce until smooth.  Stir into vegetable mixture.  Cook until sauce comes to a boil and is slightly thickened, about 2 minutes.  Remove from heat and cool.

To fill the wontons, lay a wrapper in front of you so that it forms a diamond shape.  Wet all the edges of the wrapper with water, using index finger.  Place a heaping teaspoon of filling in the middle.  Bring the top half of the wrapper over the filling and seal the edges by pressing slightly.  Fold the side points (the ends of the rolls) over, then continue rolling like a taco or a cigar.  Note that it is easier to lay out 8 wonton skins at a time, as in an assembly line.

Fry the wontons in about 2 inches of hot oil until golden and crispy, about 2 minutes.  Served with duck sauce. 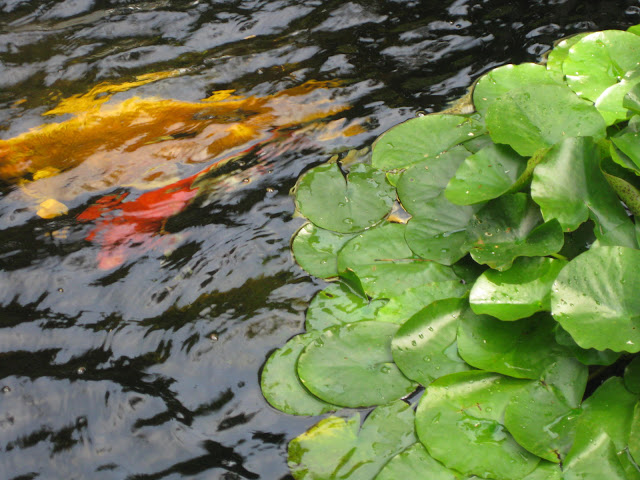 A near-abstract photo of ornamental koi taken in Encinitas, California

Sauce made with plums are just simply ravishing!:) I love your little treat here with combination of words that I really really like; vegetarian, springrolls, mini...and best of all, the word, HOMEmade!:D

Guess I have to file this until next stonefruit season [and put on an asterisk to try promptly!]: so much for the enticing plum sauce, but there are no such problems with the springrolls are there? :D !

Your sauce looks divine! I've never made my own before but I can imagine how divine it would be :D

Your duck spring rolls just look so delicious Victoria and I love the look of your plum sauce. Plums are in season here at the moment so I will try your plum sauce recipe - great recipes! xx

I crave plum sauce and can't wait until some of the local wild plums come into the market-some call them sugar plums-small-about the size of a big cherry tomato. Your sauce looks delicious and the spring rolls amazing! Lovely informative post, too!

Your plum sauce looks delicious and yummy with home made spring rolls. GG

I just had a tuna tartare dish in an Asian Fusion restaurant that was presented as a molded stack -- sushi rice on bottom, a salad of jicama, cucumber and avocado, and then topped with the tuna. I was surprised with the inclusion of jicama but loved what it added to the mix. It's so refreshing.

And now I see it here with your beautiful springrolls and plum sauce. Very nice!

I was with Joan enjoying that dish. I will make this as I hate buying the one in jars from the store.

Thanks for the history of plums. I had no idea they were from China and I always love learning new facts about the food I eat. Also, great recipe. I miss good Chinese food.