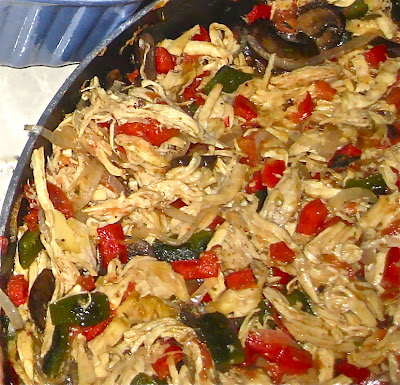 Reinterpretations of old standbys can be a good thing.  I mean, everyone loves classic Chicken Cacciatore, right?  So when deconstructed into a filling for crêpes and topped with a gooey Parmesan sauce, how can you go wrong?  Can you tell I am in the mood for Italian comfort food?

This recipe was just so good, so comforting that I have to share the recipe with you.  I just wish I had some really stellar photos to go with it to do it justice, but we were rushing by the time it came to dishing these up at the end of an Italian cooking class that I simply didn't have the time to stage my final dish very well--I had a group of hungry, hard-working cooks looking for sustenance!

We made these last week in a cooking class I gave to Mexican cooks to teach them how to prepare new food, to give them new inspiration, to help them become more secure in their jobs, to help guarantee work in the future...you see, it's never just about the recipes.  It's about the people' it's about fun; it's about educating palates; it's about new techniques and ingredients; it's about life.  But I digress. 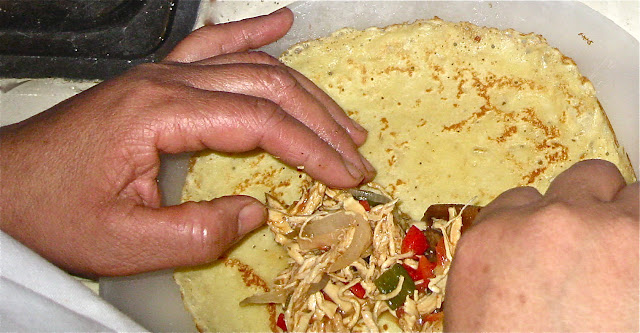 One of the cooks filling a crêpe

When it comes to Italian sauces, while the origins are often obscured by time or lost in history, the names are something else altogether.  And there is always a story about the names--or several. They are Italian, after all.  And unlike Mexican sauces, which refer to a specific ingredient (encacahuatada = in peanut sauce, enchilada = in chile sauce, enfrijolada = in bean sauce, and so on), Italian sauces often refer to the people who originated them.

There is a certain practicality about the names of Italian dishes that usually gives hints about the actual preparation.  And a certain ambiguity as well.  For example, marinara is a southern Italian tomato sauce named after the seafarers who carried it with them on long voyages long before refrigeration, to flavor their fresh-caught seafood.  Or, some say, it was the sauce prepared by the wives of those same Neapolitan sailors upon their return to port.


Puttanesca sauce, that perky, palate-enticing melange of tomatoes, olives, capers, anchovies, garlic, chile, and herbs, is another such case.  Made by the puttas, or prostitutes, either as a quickly produced pasta-topper thrown together in between their "dates" with clients or perhaps as a means to lure in men from the street with an irresistible, hunger-evoking aroma. You see?  Ambiguous.

And carbonara, a sauce named after carbonaro, the Italian word for charcoal burner, refers to a sauce made by tossing hot pasta with egg, pancetta, and cheese, as a quick dish made by the men who made charcoal from felled trees--or by their wives.

And then there is cacciatore.  Cacciatore is Italian for "hunter" and it refers to a sauce that is served with browned chicken or rabbit pieces.  Some say it should be called "alla cacciatora" in reference to the hunter's wife who probably actually prepared it, but again, therein lies that hint of ambiguity that I love about these names.

But the end result is that cooks know when they see the word alla marinara that it refers to a tomato sauce; alla puttanesca reveals a slightly picante tomato sauce with hints of chile and anchovies; alla carbonara tells us it has eggs and cheese; and alla cacciatore hints that the dish is made of browned chicken or rabbit braised in a tomato-rich, sometimes wine-enhanced cauldron of goodness.  And that brings us to this reinvented dish. 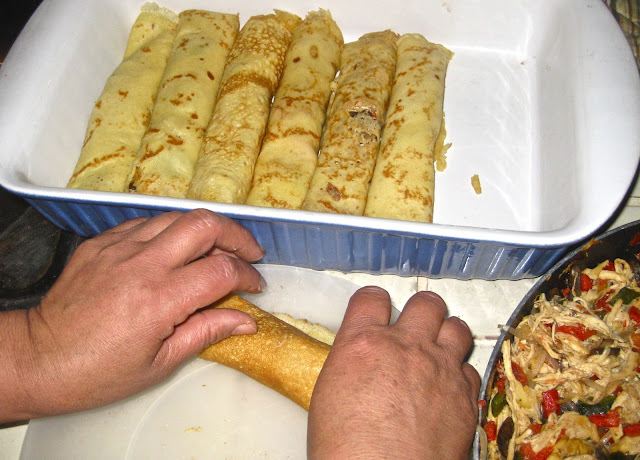 One of the cooks stuffing the crêpes

This Modern Dish
This modern interpretation of Chicken Cacciatore is a quick fix, not a long braise.  You can make it from rotisserie or from freshly poached chicken breasts as I did here.  The crêpes themselves, called crespelle in Italian, have a slight twist in that they use browned butter in the batter.  The sauce--yes, yes, I know, I know, it's fattening with its use of cream and cheese (make it with a low-fat milk bechamel sauce if you must)--is rich and comforting for that occasional meal when just nothing less will do. 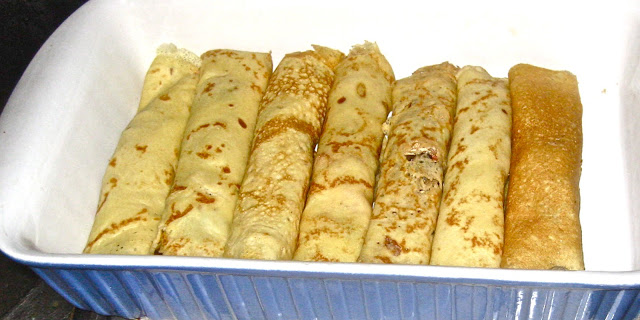 A row of stuffed crêpes ready for saucing

One lone, unadorned fellow on my plate 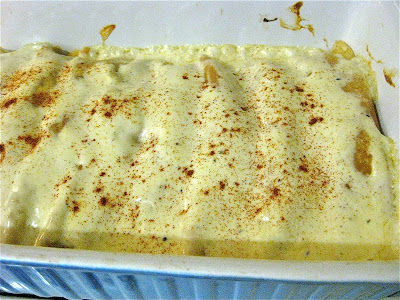 The unadorned dish, straight from the oven, just in time to avoid a food riot

Recipe:  Baked Crêpes Cacciatore with Parmesan Cream Sauce
(Recipe from Fine Cooking Magazine)
Cook's Notes:  I poached boneless chicken breasts with garlic, onion, celery tops, carrot, and bay leaves.  Next time I would add wine.  I also used a roasted and peeled poblano chile instead of the Anaheim and used the broth from the poached chicken.  I would also increase the amount of hot sauce.  You might double the amount of tomato as well, if you like.  Remember that you could make a low-fat bechamel sauce should you not want to use cream.  Try Fine Cooking's recipe for Brown Butter Crêpes and note all the variations at the end of the recipe.

In a 12-inch skillet, heat 1 tablespoon of the oil and the butter over medium-high heat until sizzling.  Add the mushrooms, season with 1/2 teaspoon salt and a few grinds of pepper, and cook, stirring frequently, until the mushrooms release much of their liquid and begin to brown, 7 to 9 minutes.  Transfer to a medium bowl and return the skillet to the heat.

Add the remaining 2 tablespoons oil, the bell pepper, chile, onion, rosemary, and 1 teaspoon salt.  Reduce the heat to medium, and cook, stirring occasionally, until the vegetables are very soft and fragrant, 8 to 10 minutes; don't let them brown.

Sprinkle the flour over the vegetables and cook for a minute or so, stirring and scraping so the flour gets mixed with the fat and starts to toast a bit.  Add the broth and let it come to a simmer, stirring and scraping up any browned bits, about 1 minute.  Add the tomatoes, lemon juice, and hot sauce; bring to a simmer again and cook for 1 to 2 minutes to slightly thicken the sauce.

Add the chicken and mushrooms and simmer for a few minutes until everything is heated through.  Remove from the heat and season to taste with more salt, pepper, hot sauce, or lemon juice.  Cover the filling and keep warm.

Make the cheese sauce:
In a heavy 1-quart saucepan, bring the cream to a boil over medium-high heat.  Reduce the heat to maintain a lively simmer and cook until the cream has reduced by half, about 10 minutes.  Reduce heat to low and add the cheese, stirring until melted.  Season generously with pepper.  Remove from the heat and let cool slightly.

Assemble and bake the crêpes:
Preheat oven to 400 degrees F.  Butter the bottom and sides of a 9x13-inch baking dish.

Working with a few crêpes at a time, lay them on a clean work surface.  Spoon about 3 heaping tablespoons of the filling evenly onto the bottom third of each crêpe.  Fold the bottom edge of each crêpe up and over the filling, fold the sides in toward the center, and finish rolling up from the bottom.  Evenly arrange the crêpes seam side down in a single layer in the baking dish.

Spread the cheese sauce evenly over the crêpes and sprinkle with the paprika (if using).  Bake until the sauce is golden and bubbling slightly, 12 to 16  minutes.  Serve. 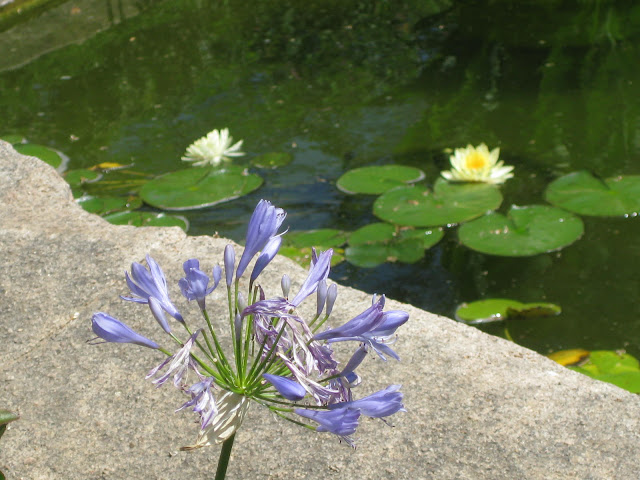 Posted by Victoria Challancin at 10:22 AM

One frequently doesn't think about the meaning and derivation of the name behind classic dishes so that was interesting to read.

I like this re-invention. It's not a far cry from from a chicken enchilada, no?

Of course it is always about fun! That's why we love to cook :) Great recipe! I love crepes but never thought about baking them this way. Thanks a lot for the recipe.

You took me back to my childhood: this dish is so similar to the N European 'komm-morgen-wieder' ['come again tomorrow'], which could be done either with beef or chicken and was always a great favourite. Perchance not quite as expertly flavoured up north :) ! A fair few kilojoules here, but surely one can indulge occasionally! Yum!!

What a fantastic meal Victoria. It looks so delicious. I love that chicken dish and I love crepes and I love parmesan sauce. I'll have to make this xx

Victoria, I'm totally with you! I am craving Italian comfort food at the moment and crepes are also a favourite of mine. Put the two together and you have magic!

Mmmmmm yum they looks delicious! I can't wait to try with some GF crepes!

Thank you for a very informatie and enjoyable post.
I loved hearing the history and the thought process behind the recipe. I love trying different chicken recipes and this sounds like one the family would enjoy

Your baked crepes remind me of an enchilada dish that my grandpa used to make, but I have not been able to recreate it. I have a feeling these are going to taste just like those enchiladas. :)

I agree with my friend Joan...very interesting post and a spectacular recipe...love the cream sauce.

Wow! I love your combination here. What a wonderful recipe!