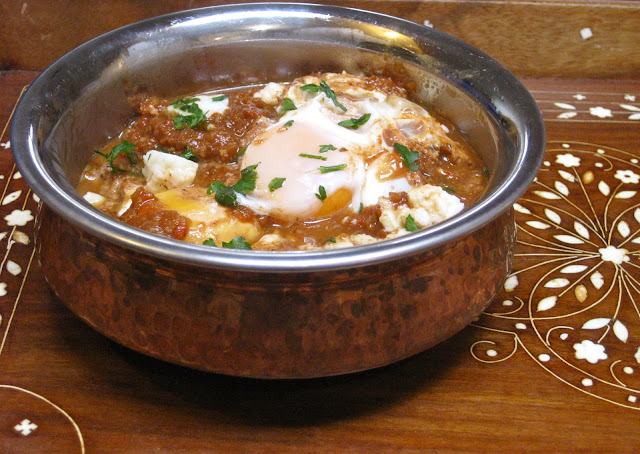 For those of you that know me or follow my blog, you know that I both lived for many years in the Middle East and travel to Morocco, leading my own private groups, each year.  These two facts about my life happily coincided when I recently saw a post in the delightful Eats Well With Others, written by Joanne, a medical student living in New York.  Joanne invented a new interpretation of a favorite dish of mine, shakshouka, which I first learned to love when I lived in the Middle East.  Joanne's version combines the basic components of muhammara, a Syrian dish of roasted peppers,which I wrote about here) with the Tunisian-style shakshouka, made by a Yemini chef, that I had learned to love while living in Abu Dhabi.

Though the spellings vary (shakshouka, shakshuka, chakchouka, shaqshuqa, and so on), they all refer to a fragrant, spicy dish of eggs poached atop a simmering stew of tomatoes, peppers, onion, and garlic.  I knew it as a Palestinian dish, but a bit of research shows me that it originally comes from the Maghreb of Northern Africa and probably traveled to Israel with the Sephardic Jews.  From there it migrated to Yemen, where it remains a popular dish, and on throughout the Levant and other Arab countries.  Other scholars suggest that it originated in the Ottoman Empire, from where it spread throughout the Middle East and Spain, where it is served with spicy chorizo sausage.  Still others say it comes from Yemen, where it is served with the fiery green condiment of green chiles called zhug.  Wherever it originated, it can now be found all over the Middle East, including Israel, Egypt, Libya, and Yemen, as well as Tunisia, Morocco, and Algeria, all in the Maghreb.

Old English teachers never die, they just keep on studying words...As a former English teacher, I am fascinated by etymology, the study of words and how they evolve.  While checking into the history of shakshouka, I learned that the word is thought to come from the Berber Tamazight language from a word meaning "a mixture."  Other sources suggest that it comes from Hebrew word leshakshek, which translates as "to shake."  Whatever the source, the end result is a dish you should definitely add to your repertoire.

Although I have eaten something similar in Morocco, which is a part of the Maghreb, the dish I am most familiar with comes from the Middle East.  This particular healthy, oil-less version, (the best I have ever made) combines the roasted peppers and pomegranate molasses (see my recipe for pomegranate molasses vinaigrette here) of a traditional Syrian muhammara  (my recipe for it is here) and the cumin- and cinnamon-laced North African style of chakchouka.  After roasting the peppers, it comes together really quickly and is healthy to boot!

Thank you, Joanne, for a thoroughly satisfying dish!

Muhammara-Style Shakshouka
(Recipe from Eats Well with Others)

Note:  The only changes I made in this recipe were cooking times, probably due to the fact that I live at an altitude of 6700 feet and sometimes need to cook dishes a bit longer than recipes require).  Traditionally, this is cooked and served in an iron skillet or similar cooking vessel.

Tip:  It is easier to add the eggs if you break them into a small bowl first and then slide them on top of the simmering tomato mixture.

Combine the roasted red peppers, walnuts, onion, and garlic in a food processor and process until combined.

In a nonstick skillet over medium-high heat, combine the red pepper puree, molasses, tomatoes, lemon juice, cumin, cinnamon, smoked paprika, and red pepper flakes.  Bring to a boil, lower heat, and simmer for 10 minutes (I cooked it for 15 minutes) so that flavors can meld.  Add salt and pepper to taste.

Crack the eggs into the pan and into the sauce, gently, so that the yolks don't break.  Cover and cook for 3 to 5 minutes (I had to cook them for 7 minutes to cook the whites) or until set.  Sprinkle with feta and parsley and serve. 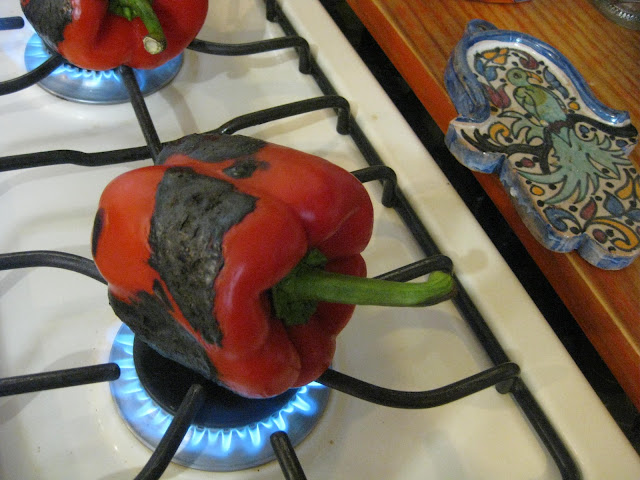 Although peppers can be roasted in the oven, I prefer to roast them directly over the flame on my stove. 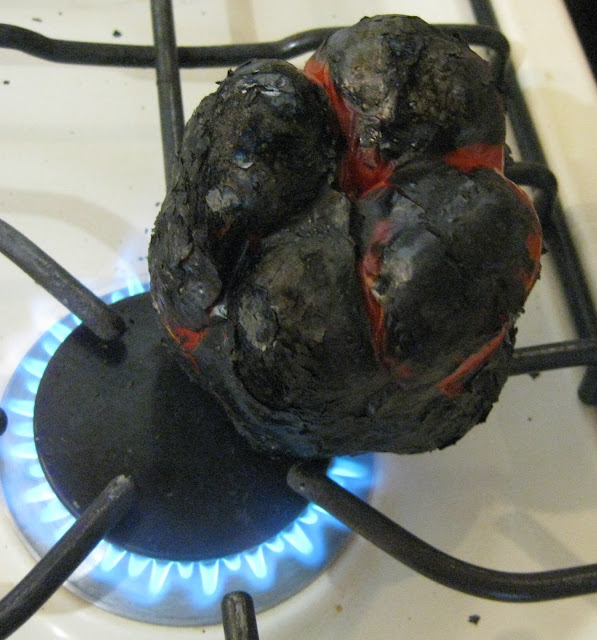 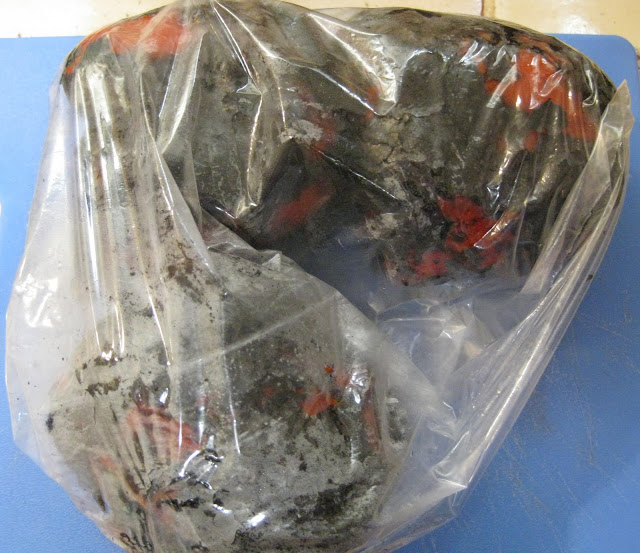 Peppers, sweating inside a plastic bag

Tip:  After roasting and sweating peppers, roll the peppers around inside the plastic bag to remove much of the burnt skin.  Then use a paper towel to remove any remaining charred skin.  Your fingernails will thank you. 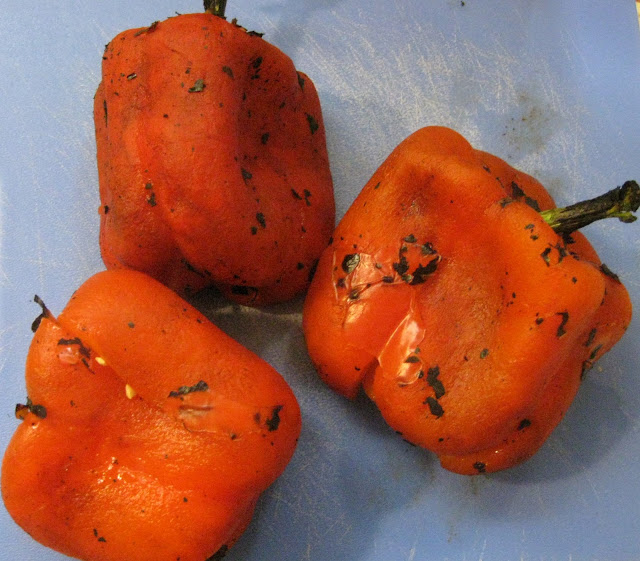 I never mind a bit of charred skin left clinging to the peppers.  And I NEVER rinse my roasted peppers as I feel it leaches precious flavor.  Carcinogens vs. flavor.  You decide. 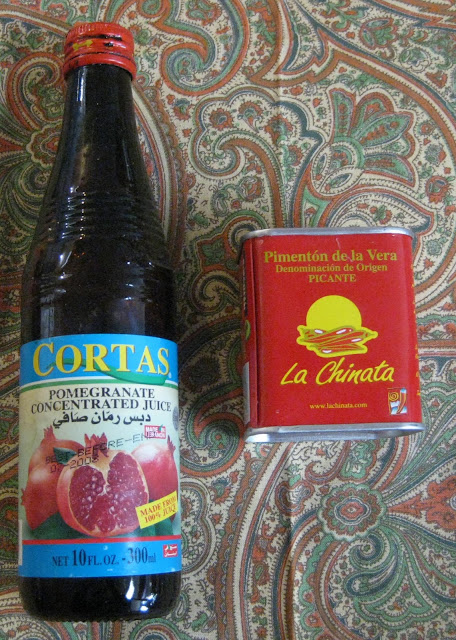 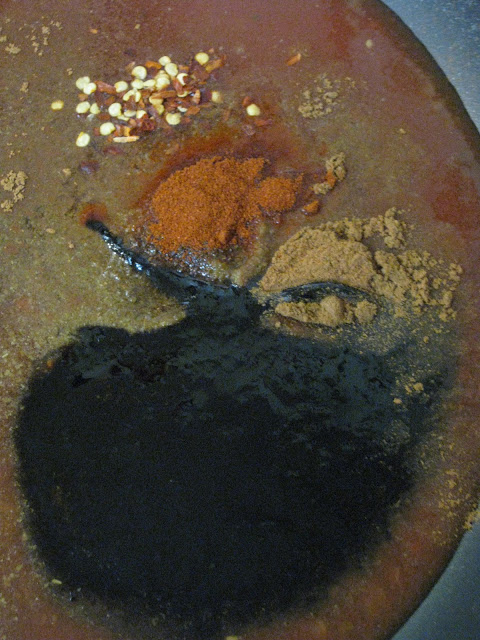 The spices and pomegranate molasses in the pan 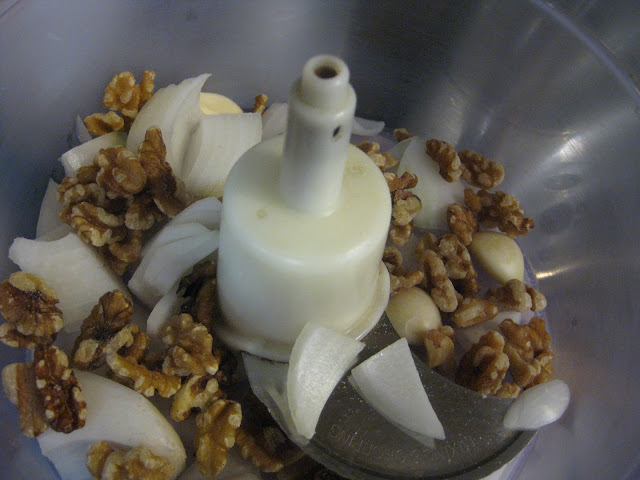 Walnuts, onion, and garlic in the food processor... 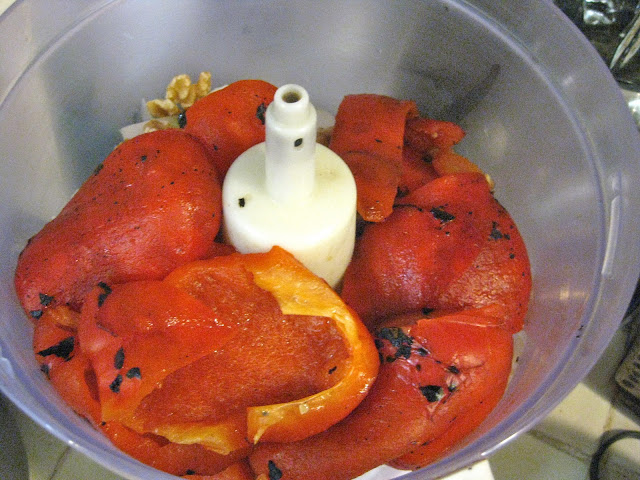 ...with the addition of the roasted peppers 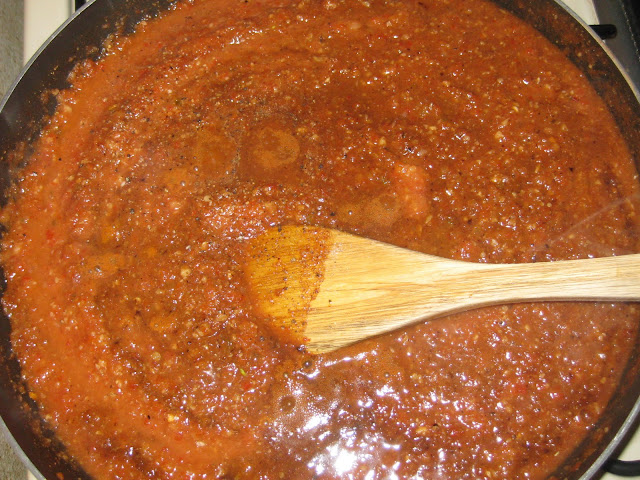 The still bright orange sauce, at the beginning of the cooking process before it deepens in color after simmering 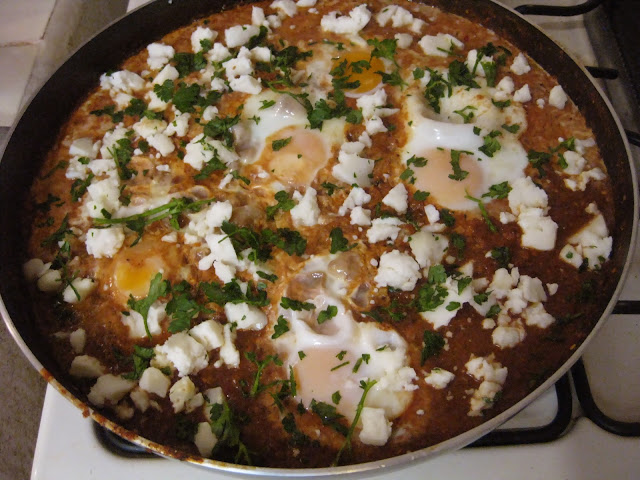 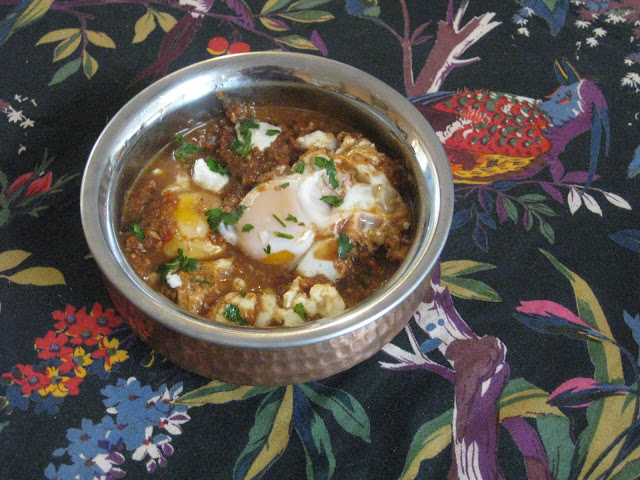 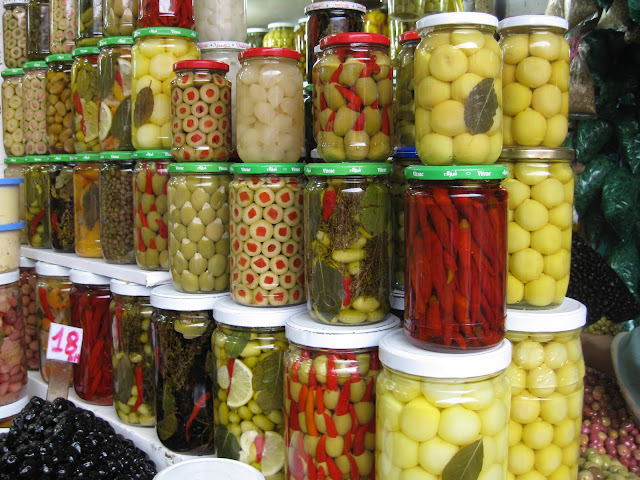 I always like to end my posts with photos of random things that just make me happy, like these preserved food items in the Marrakech souk, taken last Spring.

Posted by Victoria Challancin at 11:53 AM

This looks so comforting and full of flavour from the first picture. And then you scroll down and read the recipe and see the pictures and see how you get that delicious flavour int it! :)

I've never liked peppers much, but this dish somehow makes it look delicious. Love the instruction photos too!

Platanos, Mangoes and Me! said...

A toungue twisted but really a dish to try and another blof to visit. Gracias!